The Wild and Poetic Life of Westerns

When a Western is done well, its images can strike deep—and often subconsciously—into our imaginations, and the reverberations have the power of myth

I’m hooked on Westerns. Not the genre-blends that are popular today—the cowboy romances and the zombie Westerns—but the real thing: novels set in the Old West, featuring hard-drinking, rugged individualists who are good at doing the things that must be done and doing them with grace under pressure. Except for the setting, that definition also works for hard-boiled crime novels, which is why anyone who enjoys crime fiction should also be reading Westerns. One genre’s high-plains drifter is another’s private eye walking the mean streets.

Many decades ago I took a class in English Romantic poetry from a professor who made the peculiar claim that anyone who wants to understand poetry should read or watch Westerns. Huh? What could High Noon possibly have to do with Coleridge? And yet, over the years, I’ve come to appreciate the poetry of Westerns. In the same way that a poem distills an idea or an emotion into an image (or a series of images), so a Western translates a welter of conflicting notions about the frontier, and the place of the people in it, into an iconic tableau that tells the story in a moment: a homesteader’s house on an empty plain, and a man on a horse riding slowly into the frame; a gunfight on a dusty, empty street; the swinging doors of a saloon. Such tableaux can descend quickly into cliché, of course, which is why there are so many bad Westerns (and bad poems, for that matter), but when they work, when the image strikes deep (and often subconsciously) into our imaginations, the reverberations have the power of myth.

I’m sensing you anti-Western types aren’t convinced. So here are two arguably poetic Westerns to try. Start with Elmore Leonard’s Hombre (it’s no surprise that crime-fiction master Leonard wrote several outstanding Westerns before he turned to the mean streets). Hero John Russell (played by Paul Newman in the 1967 movie version) was raised by Apaches but is now riding a stagecoach on the way to a new life with white people—a stage, that, naturally, comes under attack from outlaws, forcing Russell (reviled as a “half-breed”) to save the bigots who despise him. It is a classic Western situation: A man responds to circumstances beyond his control and takes action not out of any moral imperative but because context drives him to it. A narrative cliché or the portrayal of an archetypal existential moment? On that slippery slope, the best Westerns balance their way to greatness.

Unlike Leonard’s John Russell, Amos Edwards in Alan LeMay’s The Searchers very definitely acts out of a moral imperative; but like so many morality-driven actions, it is misguided and tragic. When Edwards returns home to find his brother’s family has been slaughtered by Comanche warriors, who have taken his niece, Debbie, hostage, Edwards vows to find the girl—not to save her but to kill her (since she’s been defiled beyond repair). The novel lacks the sweeping western vistas that John Ford’s film version supplies, but it does better with the human side of the story, producing what my English professor might have called a Western version of Shakespeare’s Measure for Measure. 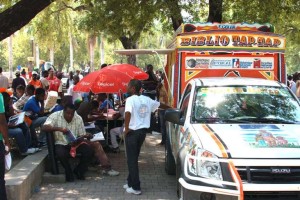 Trust in Your Trustees

Politicians prefer your board’s views on library needs over yours