American Dental Association Library May Be Set to Close

Although there was criticism about the library cuts when they were announced in July, a resolution to maintain the library budget and services at current levels failed in October. Chicago-area dentist and ADA member Spencer Bloom said in DrBicuspid.com, a dental website, that was due to members not understanding that the approved budget included a surplus of $1.1 million, of which there would still be a surplus of $500,000 even if they approved restoring $600,000 to the library. His comments were in response to a November 21 op-ed by ADA Executive Director Kathleen O’Loughlin, who wrote that the surplus was needed to build reserves.

The library cuts sparked a furor over the summer and at the ADA House of Delegates meeting in October, but the board’s budget passed largely unchanged. The final budget also included a new line of $800,000 to hire a public relations firm.

In addition to the likely staff job losses, the proposed library budget means canceling subscriptions to up to 25% of journals, as well as closing the library to walk-ins. The library stopped buying books in July and stopped lending books November 15.

The books and physical library space could also be moved out of ADA headquarters, O’Loughlin suggested in her DrBicuspid.com commentary: “Recognizing how unique the collection is, the ADA is working to find a partner to physically house these materials and is exploring potential partnership(s) with regional medical libraries.” At this point, no money has been set aside to move the collection.

Bloom noted that the resources available through the ADA library—such as copies of online journal articles at cost and books loaned for four weeks for the cost of shipping charges—would be prohibitively expensive for a sole practitioner, as textbooks average $200 each and online journal articles average $40-45 apiece. O’Loughlin wrote that “access to journal articles would stay the same as they are now.” However, Bloom said reduced access or the lack of access will discourage research and evidence-based practice, a key tenet of the ADA.

Library staff members sent relevant information and alternative suggestions to the board after they heard about the cuts, but it was not acted upon. In addition, no needs assessment or membership poll was conducted. (A member survey to gauge reactions to various ADA services was sent in mid-September, after the board adopted its budget proposal, and survey results weren’t scheduled to be in before the December holidays.) The main tool used to determine benefit priorities was Decision Lens, a software package that focuses on return on investment for government as well as companies in the aerospace and engineering, transportation, energy and utilities, consumer products, and pharmaceutical and life sciences industries. Decision Lens does not claim any expertise in nonprofit health associations, however, nor in association benefits such as libraries, which are typically not profit generators.

Carla Funk, executive director of the Medical Library Association (MLA), suggested the ADA measure return on investment in medical libraries by using one of the formulas developed specifically for libraries, such as the one created by the New England region of the National Network of Libraries of Medicine, which is part of the National Library of Medicine in Bethesda, Maryland. In October, MLA sent a letter to ADA in support of maintaining the library at current levels while undertaking a proper needs assessment in 2013, preferably with professional library consultants and librarians contributing to the evaluation. The letter also noted that the library’s services cannot be replaced with online sources, if only because there’s far less online than most people think. Most of the ADA’s library’s books aren’t online, and copyright law prevents the librarians from converting them to digital format, even if the library had the time and money involved to do so. Only 27% of the library’s current list of 470 periodicals is available electronically, and most of those can be accessed only from within the library premises—not freely on the web.

Mary J. Hayes is a Chicago pediatric dentist who is a former member of both the ADA House of Delegates and the ADA reference committee for education. In October and November, Hayes wrote two pointed columns for DrBicuspid.com, criticizing the library cuts.

“Does it matter that 1% of ADA members use the library when their work product clearly enhances the professional lives of 100% of all ADA members?” Hayes wrote November 14.

Hayes also has a library degree. Her first job was as a reference and circulation librarian at the American Hospital Association (AHA) library. While there, she noted that whenever “the AHA’s budget was tight, the library was ‘trimmed.’” She added that the professional services and expertise of a specialized library such as those at the ADA AHA, and AMA are often underappreciated and underused—but that doesn’t mean they’re unnecessary. The budget cut and reduction in services fly in the face of ADA’s mission, she wrote October 16.

“The library’s budget was stolen,” said Bloom, who’s been conducting a writing campaign since the summer, challenging the board’s reasoning on every point. He noted that in 2012, the library’s budget represented only 1% of the ADA’s total budget and suggested that the other 99% is the place to seek significant savings. “It’s ethically and morally wrong to pick on the library when you’ve got a $118 million budget to look at,” Bloom said.

The AMA, also based in Chicago, retired on March 30, and the AMA shut its James S. Todd Memorial Library on March 28. Its longstanding head librarian retired on March 30 and the AMA reassigned the two remaining librarians to other duties. One has since left the association. The library is still listed on the organization’s website, along with a nonworking phone number. MLA’s Funk observed that the AMA library had been operating at a reduced level for several years before its closure. 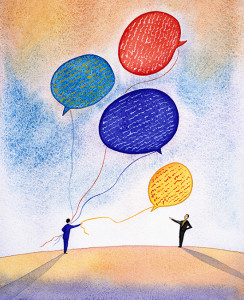 By writing for the publications our users read, we build visibility—and support—in our communities