One Book, Many Zombies

How to turn a pandemic simulation into an active learning experience

Zombies now populate videogames, commercials (for everything from cars to Skittles), even spinoffs of classic books like Pride and Prejudice. This fall, the Moraine Valley Community College (MVCC) library in Palos Hills, Illinois, moved this zombie craze into new territory, using it as an academic metaphor to connect disciplines and foster conversation and student engagement.

Library staff created a simulated zombie pandemic that linked the curriculum to the library’s cultural programming and student activities. Nearly 500 students, staff, and faculty participated, utilizing our program in more than 60 course sections that relied on an infrastructure built by MVCC’s information technology department. This campuswide learning event uniquely positioned our library to organize and execute undead events.

For more than a decade, Moraine library has organized a “One Book, One College” community reading program. The selection for 2013–2014 was Max Brooks’s novel World War Z: An Oral History of the Zombie War. As part of this program, library staff selected the following themes:

The library created podcasts and held panel discussions and lectures on these themes that were posted on YouTube and iTunes, featuring faculty from a wide variety of disciplines. In order to provide an additional learning opportunity involving the entire campus, we organized our own zombie outbreak.

“World War M: Moraine Valley’s Zombie Apocalypse” was an adaptation of the Humans vs. Zombies game popular on many campuses across the country. Instead of playing a competitive game won by killing zombies, the library adapted Humans vs. Zombies to be a test of network theory. We designed the game in a way that made it easy for faculty members to integrate into their classes and around which students could build projects to meet their course outcomes. 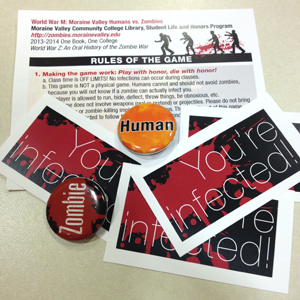 The rules of the game were intended to simulate the spread of an infectious disease. Every player received playing pieces consisting of a “human” button, a “zombie” button, four “infection” cards, and a rules sheet. Campus IT built a website that would track the outbreak and keep a running total of infected players and infections per building.

At the outset, every player wore a button designating his/her “human” status. An initial group of infected players (20 students from a literature class reading post-apocalyptic fiction) started the infection by handing out their infection cards. The newly infected then logged into the game website with their student IDs, took off their human buttons, and as the zombie virus incubated, gave out their infection cards to other human players. Those who gave away all their infection cards donned their zombie buttons, having “succumbed” completely to the virus.

But hope for the survival of the campus was not lost, thanks to a puzzle the library created that consisted of a series of questions whose answers served as an “antidote” to the zombie virus. Once the antidote puzzle was solved, we hoped to see if word of mouth could counter the spread of the infection. The first student who solved the puzzle was awarded a zombie survival kit consisting of movie tickets, a bookstore gift card, and a copy of World War Z donated by the MVCC bookstore.

Library planning for the game started almost a year in advance. We wrote a planning document and game rules that library staff brought to college administrators for approval. As might be expected, they initially raised an eyebrow at our Zombie Apocalypse proposal. Their primary concern was campus safety, since most of Humans vs. Zombies involves fake guns and physical exertion. Anticipating this concern, we omitted any killing of zombies from our modified game, declared class time off limits for infecting others, and created a promotional video and rules sheets emphasizing the need for safety. We also spoke with Moraine Valley campus police so that they understood our goals. The result: Security and administrators ended up being quite supportive. 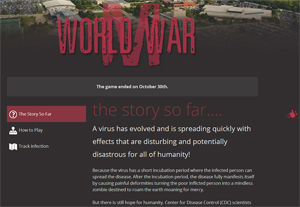 We had the game and accompanying website approved by May 2013. This enabled us to promote the game over the summer and at the beginning of the fall term, and faculty had enough time to plan how to incorporate Humans vs. Zombies in their courses. The game itself ran October 23–30. Faculty from a wide range of disciplines created assignments that revolved around the game, including:

Other faculty encouraged their students to play for extra credit as a way to engage with campus culture.

“Students were able to observe changes in human behavior when fear affects rational thinking,” noted Michelle Furlow, a Criminal Justice faculty member. “Ultimately, the World War M provided an interesting, unique platform for classroom discussion in which students were able to examine the challenges of collective efficacy. As an instructor, the World War M game was an excellent tool to spark discussion.”

Many staff members across campus also chose to play, including accountants and members of the registration, IT, and workforce development departments. Campus employees had a great deal of fun with the game. When one department member became infected, the infection quickly spread within that area.

“As an IT staff member it is not very often we get the chance to truly interact with students,” said Bill Helmold, I.T. Director of Client Services. “About an hour after the game started, I spotted a student alone on a bench holding the game buttons and reading the game instructions. I walked up to him and handed him an infection card and said ‘now you know how to play the game.’ His face lit up and I could immediately see how excited he felt to be included! That was a great feeling for me as well and a great example of the social interaction part of the zombie game.”

The game ultimately followed a predictable pattern defined by mathematicians at one of our panel discussions. The initial infection spread quickly on the first day. Each subsequent day the infection rate slowed as it became more difficult to find humans (uninfected players). By the second day, all buildings on our main campus had individuals reporting infections. By the fourth day, the infection had spread to both satellite campuses. A biology student solved our antidote puzzle by Day Three, and she immediately shared the answer online to help stop the outbreak. This resulted in online debates with other students, who didn’t think her answer was correct. More misinformation was spread by a sociology class as part of an assignment; they purposefully sent misinformation about the game and antidote around campus via YouTube videos, http://www.youtube.com/watch?v=745OQrTE6Gg. The rate of spread and the impact of misinformation helped to make World War M a great simulation of an actual pandemic.

Most importantly, our library proved itself to be the only department able to organize an experiential-learning event that crosses disciplines and provides learning opportunities beyond the classroom. Our primary purpose is curricular, so we were able to make this into a learning event while still partnering with the Student Life Office for outreach. Our librarians regularly work with MVCC programmers in IT, marketers in public relations, and faculty members, all of whom were instrumental in making the program work.

The MVCC library staff always says that the library’s purpose is to connect people with ideas. World War M, proved that—and was a lot of fun besides. 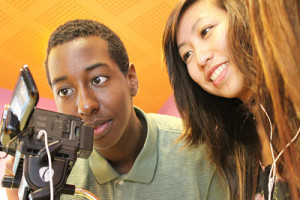 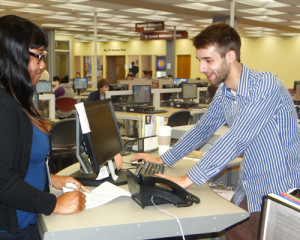 LIS on the Job

How library schools are preparing students for today's workforce