American librarians explore the profession 90 miles from US shores

Thirty librarians from across the US traveled to Cuba February 10–17 to visit the Feria Internacional del Libro de La Habana (Havana International Book Fair) and other sites throughout the country. Former American Library Association (ALA) President Leslie Burger (2006–2007), who serves as chair of ALA’s International Relations Committee, led the delegation. Asociación Cubana de Bibliotecarios (ASCUBI) and ALA organized the tour.

The group convened at the host library: the Biblioteca Pública Rubén Martínez Villena, housed in a centrally located building that held the US Embassy until 1960. Starting with an aperitif of mojitos, the group spoke with Library Director Regla Perea in a small garden outside the library where two magnolia trees, gifts from former US First Lady Michelle Obama, had been planted. Perea said that the greatest challenge facing the library today is acquiring and learning how to use appropriate technology while also integrating it into the community.

After a stop at a public library in Habana Vieja, the group visited Biblioteca Nacional de Cuba José Martí, an imposing structure on the Plaza de la Revolución. With a staff of 320 and 17 floors of space, the library has 4 million titles in its collection. Authors deposit copies of their works there, and government publishers are required to include one copy of all publications in the library’s collection. Among its array of services, the national library has a reading room devoted to services for the visually impaired, where staffers can scan and print any document and convert it to Braille or to audio format.

Because of Cuba’s long reliance on the former Soviet Union for economic support, there is a prominent Russian-language collection at the national library sponsored by Russkiy Mir Foundation, which promotes Russian culture and literature. With attractive exhibits and open shelving, this collection can be compared with the American Spaces program designed by the US State Department to provide foreign citizens with a window into American culture and values.

Margarita Bellas Vilariño, assistant director at the national library and president of ASCUBI, noted that the association has 3,400 members and is the largest library association in Latin America. ASCUBI was founded in 1986 and has chapters in many areas of the country. The chief goal is the professional development of its members, so it schedules its annual meeting to coincide with the book fair. Though relations with the US are strained, Cuba has many international partners. In 1994, Cuba was the first country in Latin America to host an IFLA World Library and Information Congress.

The last stop on the tour was the town of Cienfuegos, affectionately called the Pearl of the South, and the home to French settlers in the 1800s. Biblioteca de Cienfuegos, located in a handsome 1879 building that once housed a lyceum, was established in 1962. The library is noted for its strong local history collection, which includes a copy of every book published in or about the province. Library Director Neify Castellon Vega said that the bound newspapers in the collection are soon to be digitized to assure their survival for researchers. As at the national library, Biblioteca de Cienfuegos has a special reading room for patrons with visual impairments, a service initiated in Cuba at the library.

The ALA-sponsored tours to Cuba have allowed librarians from the US to learn about libraries in Cuba, the professionalism of their colleagues, and the challenges they face. It has also provided opportunities to create long-lasting connections that span wider than the 90 miles separating the two countries.

BARBARA CONATY is a retired librarian who worked at the Library of Congress and with the US Foreign Service. 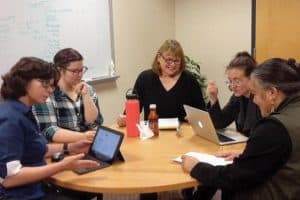 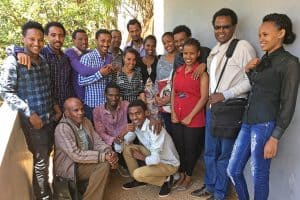