The American Library Association’s mission statement says that we “provide leadership for the development, promotion, and improvement of library and information services and the profession of librarianship in order to enhance learning and ensure access to information for all.” As librarians, we take six words of that statement very seriously. Ensuring access to information for all is at the core of many library services that were revolutionary when started but are now routine: children’s rooms, bookmobiles, interlibrary loan. And there are other services we are still working to make routine. 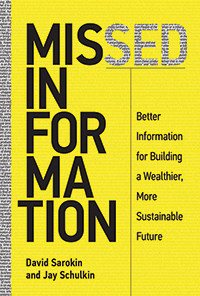 Why should we do this? Because information is power. In Missed Information: Better Information for Building a Wealthier, More Sustainable Future, authors David Sarokin and Jay Schulkin argue that knowledge is central to human activity. We gather information to make decisions at almost every waking moment, both personally and in the work environment, depending on its accuracy. The authors examine the myriad ways information is gathered—or suppressed—and the takeaway for librarians is how the absence of information can affect citizens’ effectiveness in society. Its importance in our lives makes librarians’ collective effort to serve everyone—especially the marginalized—so critical. MIT Press, 2017. 264 P. $29.95. 978-0-262-03492-0. (Also available as an ebook.) 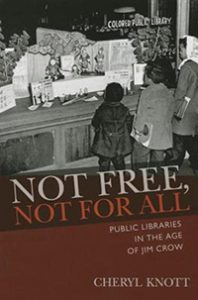 We like to think libraries have always been accessible to all. That wasn’t always the case. In Not Free, Not for All: Public ­Libraries in the Age of Jim Crow, author Cheryl Knott begins by asking us to imagine a life without libraries or ready access to books and magazines. As Knott documents, that was the case for African Americans not too long ago, even in towns with a public library. The history begins with the period of no service, during which time black communities founded their own small libraries. In some cases, these libraries became segregated branches of the public library system. The segregation extended even to Carnegie libraries, with some being built away from the majority population in the central city for use by the black population in surrounding neighborhoods. Collections differed in these segregated libraries and reflected the era’s efforts to resolve (at least in the minds of the practitioners of the era) the dichotomy between worthwhile reading and desired reading. Knott concludes with the efforts to open library service to all, which continued into the 1960s. University of Massachusetts Press, 2016. 328 P. $90. 978-1-62534-177-8. 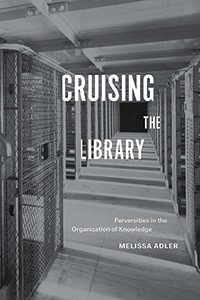 Two recent works address how library service constructs need to be changed to serve the queer community. Cruising the Library: Perversities in the Organization of Knowledge, by Melissa Adler, explores how everyday library tasks, like cataloging, have “effectively condemned certain bodies of literature … to a certain death.” Adler uses specific books and subject inquires as starting points to discuss the failings of subject headings, classifications, and taxonomies in helping LGBTQ library users locate materials of interest. The use of terms like “neuroses” rather than “bisexuality” stigmatizes or, at best, marginalizes a book. Similarly, classification using the same biases collocates material in negative ways. Adler also documents collections that have sequestered queer literature, effectively censoring it for most users. Fordham University Press, 2017. 248 P. $28. PBK. 978-0-8232-7636-3. (Also available as an ebook.) 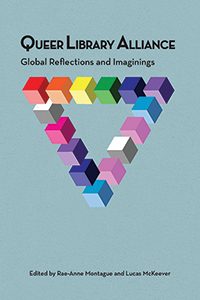 Queer Library Alliance: Global Reflections and Imaginings, edited by Rae-Anne Montague and Lucas McKeever, includes essays contributed by members of the International Federation of Library Associations and Institutions LGBTQ Users Special Interest Group. The four essays on developing library services to meet LGBTQ users’ needs cover how the profession has developed to respond to those needs. The first chronicles the case of Michael ­ McConnell, who in 1970 fought to keep a job offer that was rescinded because he was gay. The essay on LGBTQ services to British youth includes suggestions for improvements. Archives are central to the next essay, specifically the bravery in preserving records in the face of official opprobrium. Hearkening back to Adler’s book is an essay on the discriminatory nature of the Universal Decimal Classification. The second group of four essays looks at ways to augment queer professional practice, starting with serving LGBTQ populations in rural India. The next describes how staff at the Mariestad Public Library in Sweden worked with local LGBTQ advocates to expand awareness and improve services. Collection development issues, particularly expanding special collections to include material from local LGBTQ groups and using social media for promotion, round out the book. Library Juice Press, 2017. 282 P. $35. 978-1-63400-031-4. 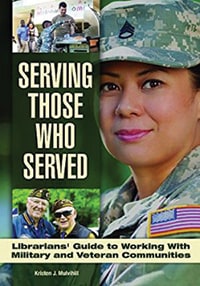 In Serving Those Who Served: Librarians’ Guide to Working with Veteran and Military Communities, US Army veterans Sarah LeMire and Kristen J. Mulvihill assembled a collection of wide-ranging but practical suggestions for meeting the needs of this population. They start with a description of the population, including a review of its overlap with other communities, and offer dos and don’ts for working with members of the military, debunking any myths one may believe. They cover how to obtain materials and content needed to support frequent information requests, with guides to materials from veterans’ organizations, educational support programs, crisis hotlines, legal resources, and similar community services. Libraries Unlimited, 2017. 200 P. $54.98. 978-1-4408-3432-5. (Also available as an ebook.)

KAREN MULLER is librarian and knowledge management specialist for the ALA library.

Gathering in the Clouds

Less Is Not More