You’ve heard of fidget spinners. But what about fidget quilts? In 2015, David Kelsey, outreach services librarian at St. Charles (Ill.) Public Library (SCPL), attended a Reaching Across Illinois Library System (RAILS) program where he heard a presenter mention fidget quilts. These small lap quilts, which also sometimes come in the form of a wearable apron, are affixed with zippers, buttons, and other items that people can manipulate to help reduce nervous tension. The presenter was Glenna Godinsky, life enrichment liaison at Gail Borden Public Library in Elgin, Illinois.

Godinsky says her library partnered with an area quilting club to create and donate them to patrons with memory loss and other cognitive issues.

By 2050, as many as 16 million Americans may be diagnosed with Alzheimer’s disease.

Hadi Finerty, senior manager of education and outreach at the Joliet, Illinois, chapter of the Alzheimer’s Association, says fidget quilts and aprons provide needed distraction, especially during “sundowning.” Finerty explains: “A lot of times when the sun goes down, [people with dementia will] get more anxious and start to ask, ‘When am I going home? When am I going home?’” When this happens, she says, “Fidget quilts redirect them to something different.”

Godinsky says her library’s fidget quilt project was born out of an outreach program called Tales and Travels. Led at the time by librarian Norma Copes, Tales and Travels engages seniors—many of whom are in assisted living or memory care facilities—by bringing several large picture books and fun facts about a specific country to share with residents.

While talking about another country one day, Copes noticed that she seemed to be losing her audience: People were exhibiting restless hands and wandering minds. Copes had heard of fidget quilts, and because she knew how to sew, she and her sewing group made several such quilts to have available for those who wanted them during the program.

When SCPL’s Kelsey heard about this charitable initiative, he was immediately on board. “I literally went back to work the next day and said, ‘We are doing this,’” he says.

SCPL reaches about 250 seniors a month through its programming, and thanks to several recent events at which residents came together to create and stitch, about 50 fidget quilts have been donated to the library since summer 2017 to pass along to those in need.

“You may not realize you have made an impact with someone with Alzheimer’s or dementia, but you definitely have,” Kelsey says. “They might not engage, but you’re definitely reaching them.”

Another library producing fidget quilts is Lafayette (La.) Public Library. This past fall, several sessions were held in one of its makerspaces, where visitors could assemble their own fidget quilts. As a result, a dozen original quilts were donated to area assisted-living facilities. Additionally, the makerspace’s 3D printers helped create items such as keys and rings that could be sewn onto quilts.

Cara Chance, assistant manager of Lafayette’s South Regional branch, says the events were so popular that the library is doubling its number of sewing machines available for use from six to 12.

“It’s really interesting,” says Chance, “because a lot of people come in and they’re impressed by the laser cutter, impressed by the 3D printer, but it surprised me how many people came in and said, ‘Oh look, they have sewing machines.’”

Chance and her 13-year-old daughter Aria participated in a quilt-making session, practicing what Chance considers a long-lost skill. The two had an excellent experience, so much so that Aria has gone on to work on additional quilts.

“Quilting is like many forms of art,” Aria says. “If you just take the time to learn, plan, and deal with bumps in the road, you can make something great.”

Godinsky says of her district, “The key thing is that we saw the need to meet our patrons where they are. We need to pop up in the community and be the library there.”

This kind of community engagement streams in multiple directions, explains Finerty of the Alzheimer’s Association. She says that connecting with library leaders has boosted and deepened her organization’s memory health education efforts.

“This relationship has opened doors to libraries we’ve never thought of going to,” she says.

Kelsey says he feels very lucky that senior patrons welcome the library into their lives. He says he believes wholeheartedly that stitching quilt blocks makes a tremendous difference to the people around us.

“One of the strengths of a public library is making community relationships,” Kelsey says. “It just makes me feel so blessed and honored to do this.”

BAILEY BREWER is a freelance writer based in California. 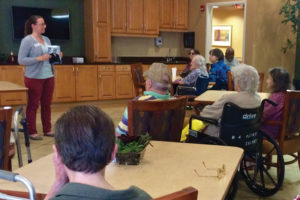