Degree or Not Degree

The question of the MLIS

Unless you’ve been hiding under a rock in a cave on Mars with your fingers in your ears, you’ve heard a lot of discussion and angst about the search for the American Library Association’s (ALA) new executive director. Having just been part of two major leadership searches, I know how difficult and tricky these can be; timing is important, as are the nature of the candidate pool, the composition of the committee, the shoes you’re trying to fill, and 100 random factors you might not even have known existed when you started.

Let me start then by expressing profound gratitude to the members of the search committee. I know several of them—fine, clearheaded, and experienced people all—and I also know they must have done yeoman’s work. These tasks are important, time-consuming, and often with little reward other than self-satisfaction because you can’t tell anybody what’s going on. It’s particularly no fun when the search doesn’t yield a viable result.

And because it didn’t yield a viable result, we are now faced squarely with the question of the professional credential. Much ink and many pixels were spilled back in January 2017 debating whether to make the MLIS a requirement for the ALA job; the discussion has now been reopened. Council took up the issue in November and voted by a wide majority to relax the requirement to a preference. Predictably, noses were put out of joint by that, and a membership petition has placed the issue before us all and, in the process, put the search on hold. So here we are again—what do we do?

Organizationally, I’m actually quite pleased that those apparatuses were put into operation; I don’t remember the last time Council voted on a matter of this importance other than at a regular meeting, let alone a grassroots effort to overturn it. It’s good to take these mechanisms out for a spin now and then, and it’s also nice to see a functioning democracy.

Much ink and many pixels were spilled debating whether to make the MLIS a requirement for the ALA job; the discussion has now been reopened.

Operationally, though, this is now a mess. This discussion has come at a time of much anxiety about the degree itself, as libraries increasingly seek people with other backgrounds and credentials, or reposition previously degreed professional work in other roles, not to mention quite justifiable student concerns about the return-on-investment value of their degrees.

In teaching a history and foundations of librarianship course earlier this year, I asked students to write a paper that suggested replacing one of ALA’s existing core values with a new one. I was struck by the number who nominated “professionalism”—not objecting to the idea per se but rather to the need to require the degree, which some of them depicted as exclusionary. It led to a stimulating discussion about the evolution of our master’s degree (pace Charles Williamson, author of the 1921 Carnegie Foundation report, Training for Library Service) and even whether it was worth considering a return to the good old baccalaureate days. Mercy.

Of course our master’s degree is important. I’ve spent my entire adult life helping people get one, which has rewarded me beyond measure. Seeing the myriad and marvelous places my former students have gone in libraries and elsewhere, and things they’ve done with those degrees, is a constant joy.

It is not, however, a golden ticket. It would have been (will be?) lovely if the next ALA executive director held the MLIS as yet another example and expression of the breadth and reach of that degree. If not, it will demonstrate our respect for the professional experience and credentials of those from other fields, as we rightly demand for ourselves in turn. Assuming, that is, that we can find anybody still willing to take the damn job given all that’s happened … but that’s another story.

JOSEPH JANES is associate professor at the Information School of the University of Washington in Seattle and author of Documents That Changed the Way We Live (Rowman and Littlefield, 2017). 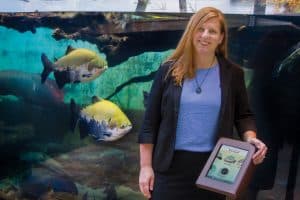 Bookend: A Friend to the Fishes

We Can, But Should We?

When trends challenge our professional values