Two civil rights giants, C. T. Vivian and John Lewis, died on the same July day. Both were courageous Freedom Riders who challenged segregation in the South. Both were close confidants of the Rev. Martin Luther King Jr. Both literally put their lives on the line in the fight for equity and access.

Lewis, who served as a US representative for Georgia’s 5th congressional district for more than three decades, was a friend to libraries and to ALA, for which he was a frequent speaker. His late wife, Lillian, had been a librarian, and libraries played a major role in Lewis’s early activism. He often spoke about how, as a teen, his efforts to desegregate his public library in the South started him on the road to becoming a “good trouble” maker.

He recalled: “I was so inspired by Dr. King that, in 1956, with some of my brothers and sisters and first cousins—I was only 16 years old—we went down to the public library, trying to check out some books. And we were told by the librarian that the library was for whites only and not for coloreds.”

Lewis would not step foot in that library for another four decades, when he went in to sign copies of his 1998 memoir, Walking with the Wind.

His recollection reminds us of two things.

One, libraries and library staff are not always inherently on the right side of history. The librarian that Lewis encountered likely felt they were “doing their job.” The job that day was to prevent Black people from using the library, a policy so pervasive in the South, especially, that many early civil rights sit-ins took place in libraries years before migrating to lunch counters, where they would be more widely publicized.

Two, it raises the question: If, by his own admission, that encounter kept Lewis, a reader and author, away from his neighborhood library for more than 40 years, how did the policy of library segregation play out in the lives of his peers and community, and what is its ongoing legacy?

What does a two-generation-long exclusion cost a community, and how does it contribute to the information poverty that libraries exist to mitigate? How do library policy, practice, and perception longitudinally impact usage by the individuals and communities most likely to have limited information access points and networks?

Researcher Johannes J. Britz, in his 2004 Journal of Information Science article “To Know or Not to Know: A Moral Reflection on Information Poverty,” describes information poverty as a “situation in which individuals and communities, within a given context, do not have the requisite skills, abilities, or material means to obtain efficient access to information, interpret it, and apply it appropriately.” Indeed, social science research has repeatedly demonstrated that poverty becomes cyclical and generational when accompanied by social and information network poverty. This consistent lack of access may actually increase poverty. The poor may remain poor throughout their lives.

As Britz writes, information poverty is a “serious moral concern and a matter of social justice.”

How can ALA and its collective constituency work to eradicate information poverty? And what of the “microinequities,” as MIT researcher Mary Rowe calls the subtle differences in tone, gesture, attitude, or manner that alienate individuals or whole communities that should be able to count on libraries for access needs?

In my next two columns, I will look at examples of where and how libraries are being called to fight against information poverty. As Lewis reflected in 2017 during one of his last ALA appearances: “We cannot afford to be silent. We should be standing up, getting in the way, and getting into good trouble, necessary trouble.” 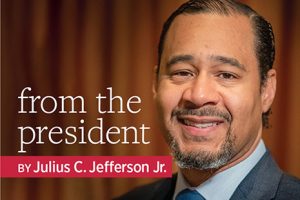 Stand Up, Speak Out

Let Our Legacy Be Justice