Archives of an Attack

Librarians and historians work to collect digital ephemera from 9/11

Like Japan’s attack on Pearl Harbor on December 7, 1941, and the assassination of President Kennedy on November 22, 1963, the events of September 11, 2001, have left a permanent time stamp on the collective consciousness of a nation. Most of us old enough to remember know where we were when the planes hit the World Trade Center in New York City and the Pentagon in Arlington, Virginia, and when United Airlines Flight 93 crashed in rural Pennsylvania that Tuesday morning.

One explanation for the staying power of these memories is that we witnessed them in real time, on television. New York City–based morning programs like NBC’s Today and ABC’s Good Morning America and local news channels broadcast the attacks to the country as they unfolded, giving viewers direct access to the raw tragedy and sensory chaos of the day. It was evident to some archivists and library workers at the time that this historic footage had to be collected for posterity.

“We thought it was very important for people to see what other people saw, because it was so much of a television event,” says Brewster Kahle, digital librarian, entrepreneur, and founder of the Internet Archive, “and to be able to see it from different people’s perspectives.”

Kahle’s response was to establish a repository of TV news broadcasts chronicling the events of 9/11. Launched on October 11, 2001, at the Newseum in Rosslyn, Virginia, the collection features hundreds of hours of footage from 20 news outlets around the world—spanning the period from the morning of September 11 to September 17, 2001—all of which can be viewed on the Internet Archive’s website.

In 2011, the project was relaunched as Understanding 9/11: A Television News Archive, with a new interface and video from an August 2011 conference at New York University that recontextualized the archive, and the attacks, 10 years on.

At the time of the attacks, the Internet Archive was already recording global television broadcasts 24 hours a day, seven days a week. Now an added urgency prompted the organization to prepare that footage for the public as soon as possible, says Kahle, especially as the US engaged in military action in Afghanistan.

“You can see things unfold,” he says. “For instance, the whole war on terror: There was an issue of ‘How is [9/11] going to be framed by those in power?’ You can see it unfold that week.”

Necessity also propelled the creation of the September 11 Digital Archive, organized by the American Social History Project/Center for Media and Learning at the City University of New York (CUNY) Graduate Center and the Roy Rosenzweig Center for History and New Media at George Mason University in Fairfax, Virginia.

Stephen Brier, retired professor of urban education and interactive technology and pedagogy at CUNY Graduate Center, says that the Alfred P. Sloan Foundation contacted the center in the days following September 11 to put together a project documenting the day’s tragedies.

“They were interested in figuring out how digital technology could be used to preserve and make available material related to the 9/11 attacks,” Brier says. “What would historians want to know 50 years from now [regarding] one of the first fully digital events of our lifetime?”

To address those questions, Brier says, he and his colleagues created on online portal of digital ephemera related to the attacks—video and audio footage, photos, emails, artwork, and more. Unlike the Internet Archive, this archive would feature materials received directly from the public via a submission form on its website and from outreach efforts. It went live in January 2002, and currently has more than 98,000 items, 70,357 of which are available for online viewing at 911digitalarchive.org.

An important component of the September 11 Digital Archive is footage and material obtained from under­represented communities, Brier says.

“We knew that if we relied only on material submitted to us, it would skew primarily white and middle class,” he says. “So we went out and actively collected oral histories from the Chinatown community in Lower Manhattan, which was devastated by the attack, [as well as] the Arab-American and Latinx communities. It was an important part of [showing] the impact of the 9/11 attacks on those particular communities, because otherwise [they] would have been invisible in the archive and in people’s consciousness.”

A similar desire to elevate diverse voices informs the Internet Archive’s collection, says Kahle, which includes broadcasts from around the globe.

Notably, international news footage in the archive doesn’t show foreign countries celebrating the attacks on the US, as reported by some national media outlets, says Kahle. Rather, it reveals a world in disbelief.

“Americans saw just how shocked the rest of the world was,” he says. 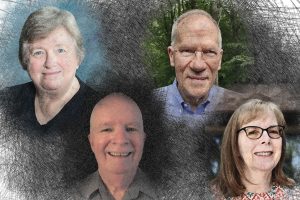 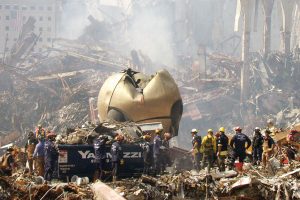