Conversations with past winners of the Newbery Medal

Recipient of the 2020 Newbery Medal for New Kid

How did you react when you learned you had won the Newbery Medal?

At 6:42 a.m., the phone rang. I was like, please don’t let it be “Hi, we’d like to lower your insurance rates” or a spam call. I picked up and there was a very excited person on the phone who said, “We’d like to inform you that your book New Kid has been chosen for the 2020 John Newbery Medal,” and everyone [on the committee] screamed in the background. I was stunned. Then, about half an hour after that, I got a call telling me I had also won the Coretta Scott King Author Award. So that was quite the morning.

How has it been seeing your books challenged? Were you expecting backlash when you set out to tell Jordan’s story in New Kid?

It’s disappointing. When kids think, “I’m going to sit with my favorite book, because I really relate to this kid not fitting in,” and then adults come and physically take the book out of their hands? Especially at a time like this? We should be making kids as comfortable as humanly possible. So, these people—they’re not really concerned about the kids. They want their agenda.

You’ve said New Kid is something you never had growing up—a book about a person of color where the reader can relax and laugh.

All I’ve ever wanted to do was have African American kids as iconic characters, so that you could one day say, there’s Charlie Brown, Greg Heffley, Percy Jackson, and Harry Potter—and oh, hey, there’s Jordan Banks, you know, a Black character. A lot of times, our characters are less-than. Even with a character as iconic as Fat Albert, the kids played in the junkyard. We’re always taught to have less-than and expect less-than, so the playing field is never equal. I think, as kids, you learn early on that you can’t expect things that your white counterparts expect.

Recipient of the 2005 Newbery Medal for Kira-Kira

Where were you when you learned you had won the 2005 Newbery Medal? How did you react?

I was in bed with my baby and my dog, and the phone rang, and my boyfriend, who was already awake, came and woke me up. I said, “Really? It’s 4:30 in the morning,” and he said, “I think you’re going to want to take this call.” I screamed a lot, and they recorded part of it. Later, when I heard it, I said I remembered screaming more, and one of them said, “Yeah, you did—we used only part of it.” People say they cried. I didn’t cry; it was more of a screaming fit.

What did winning the award for Kira-Kira mean for you with regard to Asian American visibility and representation?

I thought it was kind of amazing because when I was first writing, everybody told me, “Nobody wants to read about Asian people.” But you have to have this doggedness and not worry about what anybody is saying. I worked at Sears, and at one point during college, as a salesclerk, I was telling the ladies there that I wanted to be a writer, and they said, “What are you going to write about, working at Sears?”

I love that your dog Wilson has his own page on your website. I also saw that you have rescued dogs—specifically Dobermans—since 2002. How does your feeling for animals work its way into your books, like Saucy and Checked?

For the rest of my life, I’m going to throw dogs into every book because they’re a big part of my life and I feel so connected to them. They’re so open. And I enjoy writing about their incredible loyalty. When you’re sick, they lie there next to you, and they don’t bug you at all. It’s amazing the way they do that, how they know that you don’t feel well.

How did you learn you had won the 2021 Newbery Medal?

My publisher set up a Zoom, and they told me it would be with the Asian/Pacific Committee, because I had just found out that I won the [Asian/Pacific American Award for Children’s Literature], which is so exciting. Then I logged on to the Zoom call, and there were a bunch of faces, and they said it was the Newbery Committee. I had a moment of panic—“Oh my God, is this the wrong link?” Not until they all held up my book with the sticker on it did I realize that this was actually happening. I’m not sure what I said because I was in full shock.

What made you decide to include Korean folk tales in When You Trap a Tiger?

I grew up with folk tales. My halmoni [grandmother] lived with my family for a few years when I was young, and I would ask her to tell me stories. I remember specifically this tiger story that When You Trap a Tiger is built around, about two little girls who ran away from a tiger and ran into the sky and became the sun and the moon. There was magic in that story, and that feeling never left me. Whenever I thought about my family stories and my relationship with my halmoni and my relationship with storytelling as a writer, I would come back to that specific fairytale.

You grew up in Honolulu. How do your childhood experiences there resonate with you as a storyteller?

There’s a big Asian and biracial population, so I always grew up feeling like part of a bigger community. I never felt I had to justify being biracial or explain it. When I went to the mainland, I realized that’s not the case everywhere. Around that time, I had published my first book, which has a biracial main character. I was visiting schools and talking to students, and often they would come up to me and say, “Natalie, the main character, is like me.” I wanted to keep writing from that point of view and sharing that perspective and showing kids who aren’t lucky enough to grow up surrounded by people who look like them that they’re not alone

Where were you when you learned you had won for The Giver?

I was on a ship in Antarctica. My book, The Giver, apparently had been widely talked about as a top contender for that award, and I had realized I did not want to be sitting at my desk, hoping the phone would ring. At the same time, my husband was retiring from his profession, and we had decided to take a trip. We planned it for the very time when the Newbery would be announced. Because we were on a ship, they couldn’t reach me with the news. Eventually, by radio, they reached the ship, and I got a little pink slip of paper saying the radio operator had a message for me, and it said The Giver has been awarded the 1994 Newbery Medal.

The Giver has faced many challenges. What is it like to see your books challenged after all these years?

It’s very disheartening to see the challenging not only continue but get worse and worse. I’m speaking to you from my winter home in Florida, and the Florida Legislature has just passed a bill that is going to affect books like The Giver and many others. I’m hoping that it’s a pendulum that has gone way too far in the wrong direction and will find its way back eventually.

You write a lot about different worlds and time periods. How do you tap into diverse themes and characters so seamlessly?

I have a book that’s coming out next fall, not published yet, that’s set in the 1st century, 2,000 years ago. But with adolescents as main characters, wherever they are, and whatever century it is, or decade, I go back into my own self at that age, into the kinds of things that I cared about, worried about, wondered about. I have to do research to get the time period right and the setting, but the interior of an adolescent I don’t think has changed in over 2,000 years. 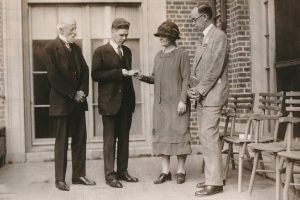 100 Years of the Newbery Medal 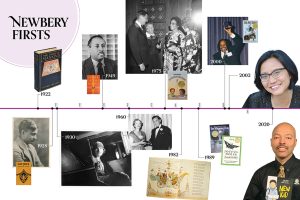