Focus on the Future

Last week, I led an ALA delegation to New York City to meet with publishers to discuss the many concerns of the library community about ebook publishing. Uppermost in our minds were the ebook concerns that have come to us from ALA members across the country—especially about pricing and availability (or the lack thereof) and the slow pace of progress in finding solutions. I expressed these concerns at a September 27 meeting hosted by the Association of American Publishers (AAP) and attended by about 100 staff from the publishing houses.

In the wake of an ALA statement on price increases by Hachette and the issuance of an ALA open letter to publishers, the delegation (which included ALA President-Elect Barbara Stripling, Immediate Past President Molly Raphael, Digital Content and Libraries Working Group Cochair Robert Wolven, and Office for Information Technology Policy Director Alan S. Inouye) had felt a bit of ambivalence about these meetings before the trip. I am pleased to report that we experienced a series of frank, thought-provoking, cordial, and productive discussions that culminated in a hopeful feeling as we left New York.

There have been press reports on the AAP session and so I won’t provide an overview here. We achieved consensus on one important point, namely the necessity for an increased focus on the future to find effective ways to resolve the issues surrounding ebooks rather than to dwell on past policies and practices. For example, one publishing representative asked, “What would libraries like to see in three years?” This led to a discussion in which Bob Wolven shared some of the work being done by the Digital Content and Libraries Working Group on possible business models for library ebook services.

Another key takeaway from the AAP session is the need for further education and understanding by all parties. We are in the midst of a digital publishing revolution in which everything is changing and becoming ever more complex and interconnected. For ALA, this means stepping up our efforts to provide educational resources for our members, including library community leaders, about the publishing ecosystem in a digital environment. Also, we need to determine how to help publishers increase their understanding of library needs and preferences.

I would like to thank the AAP for organizing this session and for brokering communication opportunities between its member publishing houses and ALA during the past year. Although libraries and publishers and their respective associations disagree on some significant policies, we do agree that continuing communication is immensely critical. 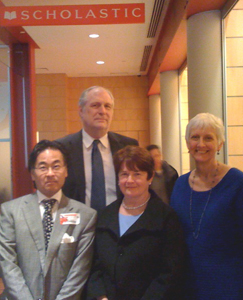 We were encouraged by what we learned in our meeting with Penguin executives. They vigorously reaffirmed Penguin’s strong commitment to the library market. In the coming months, the company plans to broaden its current ebook pilot to sites beyond New York. We also gained a better understanding of the process involved in bringing a service to market within a diverse global organization.

In support of ALA’s increasing ebook focus in the school library and children and youth segments, we met separately with executives of Rosen Publishing and Scholastic. These companies have a long tradition of working successfully with the library community. At the Rosen Publishing visit, which included CEO Roger Rosen, the delegation discussed trends and major issues for the school library ebook market. Additionally, we received a demonstration of Rosen’s impressive interactive ebooks, which are available to school libraries at reasonable prices.

At Scholastic, we enjoyed a wide-ranging discussion of the important role of school libraries in the educational process with a contingent that included the publishing house’s CEO Dick Robinson. We discussed digital content issues and ebooks in particular, including the specific services already offered to the school library and children and youth markets. We learned that Scholastic is exploring ways to extend its new Storia product, released in July 2012, to the library market. 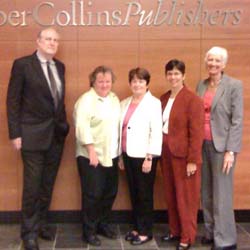 Our separate meetings with HarperCollins, Random House, and Hachette were also productive. A common challenge (and opportunity) discussed at these meetings is the complexity and continuing evolution of the marketplace. In particular, the ebook path from author to library involves multiple intermediate entities, such as agents, distributors, and retailers, whose concerns must be included in order to effectively address publisher-library issues.

What innovations might promote our common goal of bringing authors and readers together? The “buy-it-now” button is generally viewed by the library community as an acceptable development. Are there other ways in which libraries can help to promote the discoverability and sales of books that also advance the library mission and are consistent with library values? We had good discussions of possible ways to make progress.

We concluded this latest round of visits on Friday evening, September 28, heartened by the goodwill and positive intentions that were expressed. Of course, this alone will not fill our libraries’ virtual shelves with ebooks. We look forward to positive developments from publishers in the coming weeks and months leading up to the 2013 ALA Midwinter Meeting in Seattle. We will continue to pursue our strategy of heightened advocacy and publisher engagement. This is likely to include several initiatives that emerged from last week’s meetings.