A recap of the Advocacy and Intellectual Freedom Bootcamp

Libraries transform lives! This refrain was repeated throughout the Advocacy and Intellectual Freedom Bootcamp, which was held on Friday morning, as one of four messages that every library can use to create cohesive messaging. The four messages, from ALA’s Libraries Transform campaign, are:

According to the research cited by the bootcamp’s leaders, humans need to hear something up to 10 times before the message really sinks in, so let’s see how many times I can pepper these messages into my post.

This morning’s bootcamp was a collaboration between ALA’s Office for Intellectual Freedom, represented by OIF Director Jamie LaRue and Assistant Director Kristin Pekoll, and the Office for Library Advocacy, represented by OLA Director Marci Merola. The primary goal of the bootcamp—which was intentionally low-tech, in order to facilitate conversations and encourage eye contact—was to re-frame the way that librarians think about advocacy, expanding from library-centric advocacy towards community-centric advocacy.

The bootcamp began with the engaged participants practicing their listening, since the first step of advocacy is listening to community members to find out what is important to them. Participants then shared the issues that their partner’s community will be facing, proving, as Jamie pointed out, that librarians are good listeners and are especially articulate when explaining complex community issues.

In what was certainly the most emotionally affecting portion of the bootcamp, Pekoll, Merola, and Megan Murray Cusick from OLA each told stories about how a library has transformed a life (that’s two!), transformed a community (three!), how a librarian has been a passionate advocate for lifelong learning (four!), or demonstrated that libraries are smart investments (five!). The purpose of these stories, besides tugging at our heartstrings, was to introduce an incredibly useful structure for telling library stories. As one participant noted, the structure helps to keep the story short, simple, and powerful, and frames the library as a support to the community member.

While the bootcamp primarily focused on library advocacy, the presenters also argued for placing intellectual freedom at the center of the library brand. Intellectual freedom has been a core value of librarianship since the Library Bill of Rights was adopted in 1939. Battles over censorship of library materials often place librarians in the community spotlight, which can be an opportunity to demonstrate the value of librarians as trusted experts on intellectual freedom issues and a building block of democracy in their communities. (However, sometimes things go badly when librarians defend freedom of information. Resources and support from ALA for such a situation can be found here).

The shift in thinking about library advocacy from library-centric to community-centric seemed to resonate the most with the bootcampers. Other “aha!” moments included:

As the bootcamp wrapped up, the participants rated their engagement with the community from personal, professional, organizational, and overall perspectives, and resolved to make a shift towards community-centric library advocacy.

Throughout the session, participants took breaks to use their workbooks to work through different steps in the advocacy process. The workbook provided a framework with actionable steps to help librarians transform their organizations’ approach advocacy in order to become a vital asset to their communities.

Libraries transform lives! (Six! Has it sunk in yet?)

MIRANDA DORAN-MYERS is a research assistant at the Colorado State Library in Denver. 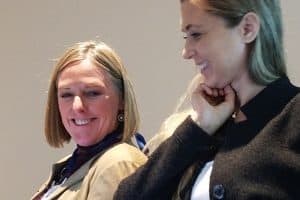 An update on the Libraries Ready to Code initiative