At the PopTop Stage on Saturday, Clayton, Sanna, and Henderson described their books, their characters, and their writing processes. Clayton’s forthcoming book, The Race for Paris, tells the story of female photojournalists during WWII. Inspired by a biography of Margaret Bourke-White, Clayton began work on her novel 15 years ago and refers to it as a labor of love, completed out of “pure literary stubbornness.” Martha Gellhorn and Helen Kirkpatrick, both reporters during the war, also inspired Clayton as she began thinking about women and the war. She explained that women were not allowed to cover the war, and the epigraph to her book, a quote from a letter Gellhorn wrote, highlights the internal conflict that caused: “I would give anything to be part of the invasion and see Paris right at the beginning and watch the peace.” Clayton is particularly interested in exploring the difficulties that women faced as journalists during the war: “It was a grand adventure played at very high stakes.”

Sanna followed Clayton with a discussion of her novel The Cherry Harvest (2015). The novel focuses on German prisoners of war housed in Wisconsin during WWII and put to work in an orchard of cherry trees. As she delved into a description of the novel and the research she did before writing it, Sanna said, “I will tell you, it started with a librarian. . . . The first place I went was the library.” She spoke particularly highly of the librarian at the Door County (Wis.) Public Library: “I couldn’t have done it without the librarian there—it wouldn’t have been the same.”

Set in the Philippines, Henderson’s latest nonfiction work, Rescue at Los Baños (2014), “is the story of what happened to thousands of American civilians who happened to be in the Philippines when war broke out.” Henderson described the book as narrative nonfiction, stating, “We use all the tools of a novelist, only it all has to be true.” Like Sanna, he described his research process and also gave glowing reviews of the libraries he visited and the helpful staff he found there. He said, “I loved going back to the National Archives in College Park, Maryland.” Henderson concluded his presentation with a teaser for his next project, which will be similar to Rescue at Los Baños, “I love telling these stories,” he said. “The real satisfaction that I get is bringing these stories to life.”

ERIKA JENNS recently graduated from Indiana University with her dual MA/MLS. Her MA is in English, and her MLS is accompanied by the Rare Books and Manuscripts Librarianship Specialization. 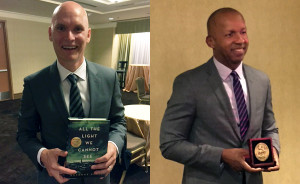