How to Foresee The Futures: Learning with AAM’s Center for the Future of Museums

Plan for possibilities, rather than a specific future.

Elizabeth Merritt, founding director for the Center for the Future of Museums (CFM), did not have a crystal ball or multi-year plans or goals when the CFM was founded six years ago. Rather, she told the crowd at “How to Foresee the Future(s): Learning with AAM’s Center for the Future of Museums” session at ALA Midwinter 2015 that they needed to choose a system, not an end point. “Future studies is not about predicting the future, but working within a ‘cone of plausibility,'” Merritt said.

This cone of plausibility, which looks at past, present, and potential future outcomes, incorporates many possibilities, because rarely does the future head exactly where the trajectory appears at the present time. However, “Our choices can shape the future,” Merritt said. “If we have a vision of where we want to go, we can [head in that direction.]”

Merritt noted that museums are very conservative institutions, and the CFM needed to be distinct from its parent, the American Association of Museums (now the American Alliance of Museums) in order to be free to explore and try new things. They had to “go from obsessing about buildings to obsessing about reach,” she said, because even though the demographics of the American population is changing rapidly, the demographics of museum attendance resembled the population of 100 years ago. Staying on that path would doom museums to an ever-dwindling attendance and make them irrelevant.

Now at its six-year point, CFM has four suggestions for those looking at the future of libraries.

While she admitted that there were some failures along the way, she had a number of successes to point to, especially in terms of building content and sharing ideas broadly via social media, a blog, and an enewsletter. What’s next for the organization is to go from ideas to action, and for that, its big vision plan is especially important. 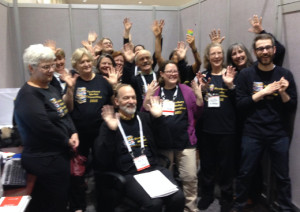 The top books, video, and audiobooks for children and young adults