As festivities of the National Conference of African American Librarians (NCAAL) drew to a close in Atlanta, attendees gathered on the morning of August 13 for a gospel brunch, a time for fellowship, good food, and artistry in many forms. After a short invocation, praise dancers draped in purple and gold robes energized the audience with their leaps and twirls. Then, gospel vocalist Voncile Belcher offered a stirring performance of two songs from her latest album. As conference-goers filled their plates with scrambled eggs, croissants, turkey bacon, and fruit, they shared hugs and laughs, taking photos with each other in their Sunday best.

From looking at this scene, one would never guess that the previous day, white nationalists had held a rally in Charlottesville, Virginia, an attack that left one dead and many more injured. This latest occurrence of racial intolerance would not dampen the mood at NCAAL, though. In fact, it would do just the opposite and strengthen the case for why gatherings like NCAAL are so critical to the survival of the profession and the well-being of black librarians.

Keynote speaker Bernice King opened by saying that in a time filled with hate, pain, anger, confusion, and hostility, simple advice rings truest. “Hang in there,” she said. “These are very tough times.” As the youngest daughter of Martin Luther King Jr., King is familiar with tough times, and in her remarks, she rightly assumed that a room full of black American librarians would be familiar with tough times, too. The focus of her speech was not education but action. King issued a twofold challenge to the room, asking that librarians come together “to organize [their] strength into compelling power” and that they teach their communities to use information to fight oppression.

According to King, libraries’ greatest strength is that they have credibility in their communities. Everyone may not trust churches or government agencies or school systems, but for the most part, people believe that “everybody is somebody in the library.” Librarians must honor the faith their communities have in them, and they must come together as servant leaders to guide their communities in the directions they want to go.

Great leaders, King said, possess three qualities: creativity, training, and humility. Though all are important, humility is often the mark of true leadership, as great leaders are humble enough to understand that they can’t do everything by themselves. King said in closing, “Walk together, children, and do not get weary.” She led a processional out of the room amid hundreds of voices coming together to use joy as their resistance, singing, “This little light of mine, I’m gonna let it shine. Let it shine, let it shine, let it shine.” 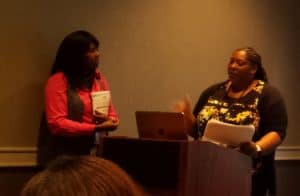 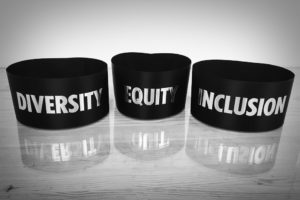