‘We’re in the Social Justice Business’

Soledad O’Brien sees a lot of overlap between journalism and the work that libraries do.

“Stories have value. And I think that libraries have inherently gone down a path that people have value,” the award-winning anchor, entrepreneur, and television host said at the Public Library Association’s 2020 Conference in Nashville on February 29.

She added: “Like assignment editors, very rarely do they get thanked.”

In her Big Ideas session talk, O’Brien likened the changing trajectory of news and her career to the evolution of the public library.

“The library as a convener of the community was a much different use of what I had seen growing up,” she said, fondly recalling her formative years checking out 20 books at a time from Smithtown (N.Y.) Library. “One day you wake up and realize, ‘oh gosh, I guess we’re in the social justice business.’”

O’Brien admits that her early career was not glamourous—and a bit superficial. “Because I was a low-level reporter, I worked all the holidays.” She copped to covering a mamba snake on the loose with “breathy urgency”; being the correspondent who stood on the San Francisco Bay Bridge yelling “Do not stand on the Bay Bridge!” in gale-force winds; and reporting a story about a man who believed his roommate was the reincarnated spirit of his cat who had passed away.

“It never occurred to me that I had the chance to work on some of the most important stories of our time,” said O’Brien. It wasn’t until Hurricane Katrina—seeing the devastation, anger, and remembrances in New Orleans, she admitted—that she saw journalism as service and felt compelled to dive much deeper into people’s lives.

“I understand what the job is now,” she said. “Elevate stories to tell them better.”

O’Brien toggled to her origin story—born to a black Cuban mother and white Australian father who met at Catholic Mass, and the difficulties and racism their union faced living as a married couple in Baltimore in 1958 (under anti-miscegenation laws).

“People would spit on us when we walked down the street,” said O’Brien, but her mom reassured her: “‘We knew America was better than that.’ You’re not allowed to opt out…. Just show up and make it better.”

One way O’Brien strives to do that is through her Black In America and Latino in America documentary series. She showed segments about food insecurity and overburdening debt among college students.

“We have to do better than this for students who want an education,” she said. “You cannot take people in poverty and tell them to get a college degree and not give them a way to get ‘to and through.’”

O’Brien sees libraries, in part, as a solution to some of our biggest social problems.

“There’s a mission of bringing people in the doors,” whether it’s the fact that 15% of visitors to San Francisco Public Library are individuals experiencing homelessness or that immigrants new to the country thrive through the programs at Hartford (Conn.) Public Library, she said. “The modern-day public library has tripled-down on service.”

“Libraries don’t just serve one demographic,” O’Brien concluded. “They are great unifiers at a time when, frankly, we don’t have a lot of stuff we can point to that’s unifying.” 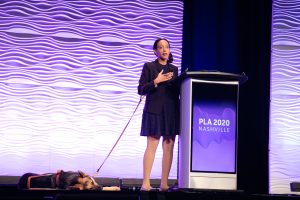