A conversation about the role of libraries and free speech

At the June 24 ALA Virtual session “Intellectual Freedom, Hate Speech, the First Amendment, and You,” Nadine Strossen, professor of law emerita at New York Law School in New Milford, Connecticut, and author of Hate: Why We Should Resist It with Free Speech, Not Censorship (Oxford Press, 2018), opened with praise for the library community.

“You are really heroes and heroines on the front lines of making freedom of speech and freedom of thought a reality for everybody all over the country,” she said.

Protecting free speech and thought, even if it goes against one’s personal beliefs or morality, should be a prime concern for librarians, Strossen said. The session was spurred by the ALA Meeting Rooms policy, which states that libraries must be neutral and allow their meeting rooms to be used by everyone, regardless of their beliefs. Many see the policy as an invitation to allow hate groups to use the library.

During the conversation-style session, Peter Coyl, director of Montclair (N.J.) Public Library, asked Strossen to explain the differences between free speech and hate speech and how they can coexist in libraries. Strossen referred attendees to the High Court: “What the US Supreme Court has called the bedrock principle of freedom of speech jurisprudence is context or viewpoint neutrality.” Government entities, including libraries, must remain neutral according to the law, she continued.

Coyl asked Strossen about concerns that a library may be viewed as supporting or endorsing a group’s views by allowing the group to use its meeting spaces. Strossen rejected such notions.

“Hosting a particular group or particular speaker or by including a certain book in collections is never an endorsement of the ideas conveyed by that group, speaker, or book,” she said. “The only thing being endorsed is the principle of open, nondiscriminatory access to all ideas and all speakers consistent with a neutral position.”

When asked if libraries can restrict those who want to use its spaces, Strossen said the law is clear: The library is an arm of the government and must allow equal access to all.

“A public library has no obligation to make any of its facilities open for meetings at all. They could choose not to open its meeting rooms to the public,” she said. “But if a library does decide that it is going to open its facilities, then it must do so on a nondiscriminatory basis.”

Strossen said she is a staunch proponent of fighting hate by using more speech, not restricting it. Suppressing speech that one finds objectionable can have unintended consequences, she said: “Any exclusion [of speech] is ultimately going to rebound to the disadvantaged. They are the ones whose ideas and voices will be silenced.”

She noted the attempts to legally silence civil rights activists during the Sixties and drew the parallel that there are regular calls to treat current-day Black Lives Matters activism as hate speech.

Strossen, whose father was a World War II concentration camp survivor, said she and her family have had hate speech directed at them throughout their lives. But she continues to fight for the free speech rights of those with whom she disagrees.

“I am absolutely convinced that the only effective way to counter those pernicious ideas is not through censorship or suppression but rather through education, counter-speech, and proactive support of people who are targeted by hate speech,” she said. “My cri de coeur is to resist hate. That’s my major mission.” 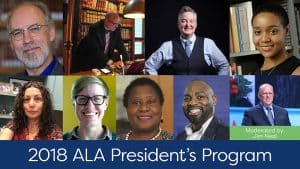 ALA Council Rescinds “Meeting Rooms: An Interpretation of The Library Bill of Rights”