On May 5–6, more than 420 librarians, patrons, teens, and parents gathered in Washington, D.C., to discuss library issues with members of Congress during the American Library Association’s (ALA) National Library Legislative Day (NLLD). This marked the 40th anniversary of the event, organized by ALA’s Washington Office. ALA President Barbara Stripling, along with ALA division president Starr LaTronica (Association for Library Service to Children) and Young Adult Library Services Association Executive Director Beth Yoke also took part in the event.

The number of advocates who participated was a full 20% increase from 2013, which made it one of the best-attended NLLD events in recent years. Several attendees said that they felt compelled to stand up for libraries this year because of the number of federal government threats to libraries that took place over the past 12 months. Since the 2013 NLLD took place this past May, several legislators have proposed that the federal government eliminate the Institute of Museum and Library Services, introduced legislation to stifle open access, and most famously, caused the US government to shut down for two weeks, which prevented the disbursement of federal grants and funding to libraries.

“When I heard about the House threatening to cut out the Institute of Museum and Library Services, that was my impetus for showing up here,” said first-time NLLD advocate Wanda Bruchis, who is the executive director of the Mid-York Library System, based in Utica, New York.

In a series of meetings with lawmakers, advocates urged funding for the Library Services and Technology Act. They also discussed the importance of supporting the Fair Access to Science and Technology Research Act; increasing support for the e-rate; restoring school library programs in reauthorization of the Elementary and Secondary Education Act; authorizing libraries as one-stop partners through the Workforce Investment Act; and funding literacy initiatives such as the Innovative Approaches to Literacy program. Additionally, library supporters stressed the importance of supporting the USA Freedom Act, a bill (HR 3361) that ALA believes would improve the balance between terrorism prevention and personal privacy protection.

For many long-time advocates, NLLD is an opportunity to strengthen the relationships that have been built with established library supporters in Washington, D.C. Kentucky advocates talked with Rep. Brett Guthrie (R-Ky.) about the upcoming Southern Kentucky Book Festival, a library-led literary event that he has attended for the past 11 years. In another meeting, the New York advocacy delegation spoke with Rep. Richard L. Hanna (R-N.Y.) for nearly two hours about library issues and recent developments in Rep. Hanna’s local congressional district.

“SOPA [Stop Online Piracy Act] should have never seen the light of day in my mind,” said Rep. Chris Gibson (R-N.Y.), when speaking to an NLLD delegation about privacy and cybersecurity principles.

NLLD also gives first-time advocates the chance to educate policymakers about the issues affecting their community libraries. As the only advocate for her state, North Dakota State Librarian Mary Soucie spoke to a congressional staff member about the issues that her state’s rural libraries face, such as the new demands for library services and programs thanks to North Dakota’s current population surge. Soucie says that many libraries are staffed only by one person and that there are 20 counties that lack libraries.

This year’s NLLD included an unexpected group of first-time library advocates—passionate tween and teen library patrons. Coordinated by the North Carolina Library Association (NCLA), dozens of K–12 students and their parents joined North Carolina State Librarian Cal Shepard in speaking to legislators about the importance of libraries and library funding. At one point during NLLD, the advocates gathered in front of the US Capitol for a “Happy” flash-mob dance in support of public libraries.

“It was awesome to meet legislators,” said student advocate Brenna Loendorf, 17, who is from Stanley, North Carolina. “It’s amazing how much of a difference you can make by speaking up.”

“It’s one thing when libraries and library staff come to NLLD. It’s another thing when youth and parents come in to talk about libraries,” said LaJuan Pringle, co-chair of the NCLA legislative committee and library manager at Charlotte Mecklenburg Library. 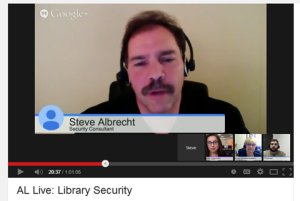 
ALA Reacts to Latest FCC Proposal on Net Neutrality