Stars Shake Up the President’s Program

The President’s Program at the 2014 ALA Annual Conference and Exhibition began as a calm affair, with this year’s award-winning librarians, authors, and library supporters taking the stage to receive recognition and gather their prizes.

Then Lemony Snicket hit the stage.

Daniel Handler—better know under his pen name, Lemony Snicket—is author of the popular A Series of

Unfortunate Events kids books and was on hand to present the first-ever Lemony Snicket Prize for Librarians Faced with Adversity, a new annual prize honoring a librarian who has faced adversity with integrity and dignity intact.

Handler transformed the calm awards presentation into a hilarious, often ribald affair as he cracked blue jokes and dryly poked fun at everyone, including Snicket award-winner Laurence Copel, youth outreach librarian and founder of the Lower Ninth Ward Street Library in New Orleans. Author Mo Willems surprised everyone when he literally jumped onstage to join Handler in the wackiness.

Handler provided the perfect introduction to the main attraction—President Barbara Stripling’s conversation with Lois Lowry, author of young adult dystopian classic The Giver, and Oscar-winning actor Jeff Bridges. The pair joined Stripling to discuss the upcoming film adaptation of The Giver, which stars Bridges in the title role (he also served as the film’s producer), as well as discuss concepts found in the film and Lowry’s and Bridges’s individual creative endeavors: memory, collaboration, community building, artistic responsibility, diversity, and literal and figurative journeys. An exclusive “sizzle reel” that features behind-the-scenes footage and clips from the new film was also screened for the audience.

Lowry and Bridges had a playful, comfortable rapport. They looked to each other as they answered questions, 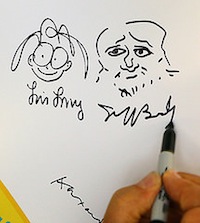 corrected each other if one got off track with an answer, and laughed freely. The vibe was that of two old friends. This relaxed, open energy flowed into their answers to Stripling’s questions.

When asked about the power of dreams and memory, Lowry and Bridges said they are both believers. “[They] are a source of fascination to me,” said Lowry. “They are the only things that are really ours.” Bridges agreed, adding that he recalls memories of his father, the late actor Lloyd Bridges, to channel his spirit as he creates his characters. “I feel like he and I were in a relay race, and he was reaching back and passing me the baton,” Bridges said.

The conversation often shifted to the process of creating, with the trio discussing book-to-film adaptations, film production, the writing process, music, and photography. Bridges and Lowry noted that the endeavors offer both collaborative and solitary rewards.

“To work together and have it come out is fascinating,” Bridges said. “I hesitate to even talk about it because it’s like being a magician and saying this is how we do it.”

Lowry and Bridges both have strong feelings about books and the important role reading plays in the lives of young and old. “There are books that you read and reread because they trigger something in you,” said Bridges. “The same goes with music. They can make you feel a certain way. It’s a wonderful mystery.”

Asked if she, as a writer, feels that she has to protect children from the brutality of life, Lowry had a thoughtful response: “Reading is the most important way to prepare for life,” she said. “Reading is a rehearsal for life. We all experience bad things. If we read about other people’s responses to these things, it can be a preparation.”

Bridges agreed. “Books and movies are a safe place to explore tragedy,” he said. “I think that’s where compassion can kind of develop for our fellow man.”

A Conversation with Jane McGonigal

A Conversation with Alexander McCall Smith