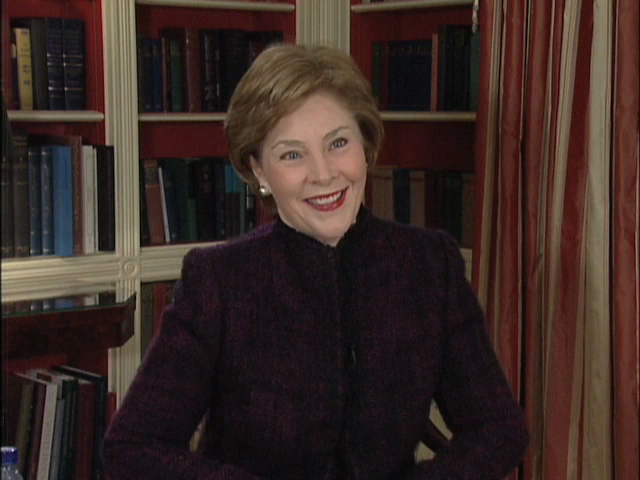 In an exclusive interview at the White House March 19, First Lady Laura Bush told American Libraries that she would definitely play a role in the establishment of her husband’s presidential library at Southern Methodist University in Dallas. “I’m really looking forward to being actively involved in the building of it,” she said. “I think there will be a very good opportunity for me to continue all the things I’ve already done around libraries and literacy.” The first librarian ever to be First Lady of the United States, Mrs. Bush also talked about how her profession influenced her own initiatives and will continue to do so when President George W. Bush’s term ends next January 20.

“We have a very good architect,” the First Lady said of the chosen design firm, Robert A.M. Stern Architects, pointing out that she would be working with the National Archives and Records Administration, which oversees presidential libraries, “to develop everything that surrounds the papers,” including matters of conservation and access and “the ways that the papers are cataloged and put together.”

The First Lady noted that she is particularly taken with President Bush’s idea that the library serve as an “institute for freedom” and sees it as an opportunity to address the issues of “international global literacy and especially the gender differences that have kept many women from being educated.” Her initiatives as First Lady have focused on helping America’s youth, education, Gulf Coast school rebuilding, women’s health and wellness, books and authors, and other issues central to librarianship.

Did her training and experience as a librarian help prepare her in any way for the role of First Lady? “It really did,” Bush replied. “And I would have never really thought of it before, but both the experience I had of reading to children over and over and over, and storytelling, were really excellent training for giving speeches.” She added that education and even economic power are issues associated with literacy. “All the advantages that a good reader has over a nonreader end up being very, very important issues in our country,” and internationally, she noted, particularly with regard to the rights of women to go to school.

The First Lady also discussed the Laura Bush Foundation for America’s Libraries, which she founded in 2002 largely to support school districts with inadequate funding for library materials. “We give to over a hundred schools a year,” Bush said. “They’re not big grants; they’re $5,000 to $10,000, but in many cases they double the school library budget for books for that year. And the grants are written to ask for something specific, whatever they might need that supports the curriculum or supports the school body population, maybe books in Spanish.”

In addition to providing materials for underfunded schools, aiding schools destroyed by Hurricane Katrina in 2005 has been the foundation accomplishment that she is most proud of. Over $3.7 million has gone to 52 schools across the Gulf Coast, she said, “and these are big amounts of money, from $50,000 to $150,000 for whole collections, because people don’t realize how expensive a whole library collection is. And a basic elementary collection probably costs about $50,000, a start-up collection. And of course a high school library could cost $150,000 or more,” Bush said.

Throughout the interview, the First Lady emphasized the importance of books, reading, and school library media centers. “We should really do whatever we can to reach out to people and let them know that there are ways to learn to read,” she said, citing libraries and books as “important to a democracy and so important to our society that it just seems natural that we would try to promote books in any way we could.”

Asked if she had given any thought to running for public office when her stint as First Lady ends, she replied, “No, I won’t be running for public office. But I look forward to working in our new hometown—our old hometown that we’re going to go back to—on a lot of different issues.” Bush said she wanted “to thank librarians who work every single day to make sure people have access to every kind of information—for free. . . . It’s important for our country, and it’s important for democracy, and it’s just very personally important for individuals.”