The week of August 22 was anything but your typical end-of-summer week on the East Coast. Truth being stranger than fiction, the events foreshadowed the beginning of National Preparedness Month in September, and increased the usefulness of the American Library Association’s disaster preparedness and recovery fact sheet.

First, a 5.8-magnitude earthquake in Virginia on August 23 set a startling tone, shutting down numerous buildings, including libraries, all along the East Coast until engineers could deem them structurally sound enough to reenter. Other than the fall of 27,000 books onto the floor of the University of Maryland’s McKeldin Library in College Park (which were soon enough tidied up), libraries seemed to emerge unscathed by the rare event.

Then it was time to begin hunkering down just in case Hurricane Irene made a nearby landfall. First, Irene cut a swath through the Caribbean between August 21 and 25, leaving six dead and as much as $3.1 billion in property damage. On August 26, the hurricane came ashore in North Carolina and moved relentlessly northward through Vermont and into Quebec. As of August 29, 48 deaths and at least $3 billion in damage have been attributed to the hurricane, with massive power outages anticipated to take at least a week to finish restoring.

The lack of electricity, coupled with communities cut off by flood waters and decimated roads, makes reports of library damage sketchy at best. (UPDATE: Scroll to the end for information on how to help.)

Here’s what American Libraries has documented from a variety of media sources, weather-related websites, and reports from librarians, listed in order according to the chronological path Irene took:

New Hanover County Library suffered water damage August 26 but was operational by August 29, when it reopened.

According to the August 29 Library Journal, a number of libraries along the coastline experienced flooding and power outages that kept them closed, although most emerged unscathed.

The Newport News Public Library “only suffered minor damage from leaks, but two of our libraries remain closed August 29 because of a lack of power,” Community Relations and Programs Coordinator Karen L. Gill reported.

A tree toppled into George Washington University’s Gelman Library, causing the library’s closure on August 28 but not causing any serious damage. Gelman reopened the next day, according to the August 29 GW Hatchet.

South Plainfield Public Library reported on its Facebook page that floodwaters had ruined the carpet throughout the first floor.

Paterson Public Library, along with every other city government and school district facility, were to remain closed through August 31 due to the Passaic River cresting at seven feet above flood level in some sections of Passaic County, the Paterson Press reported August 30.

The Saddle Brook Free Public Library is cautioning patrons that “Due to damage from flooding and structural issues, we can only provide limited services at present,” which are restricted to checking materials in and out and the use of several public computers, but without any seating. The website also warned, “There is an odor in the library as a result of the flooding,” even though air quality had been deemed safe.

Because several other rivers had not yet crested and power outages were making communication difficult, it was uncertain whether other New Jersey libraries had also—or were about to—suffer damage. UPDATE: New Jersey State Library was gathering more information through posted on August 31 the results a Google Docs survey about library damage and/or recovery assistance to the public.

Temple University’s Paley Library had minor leaks, according to the August 30 Temple News. 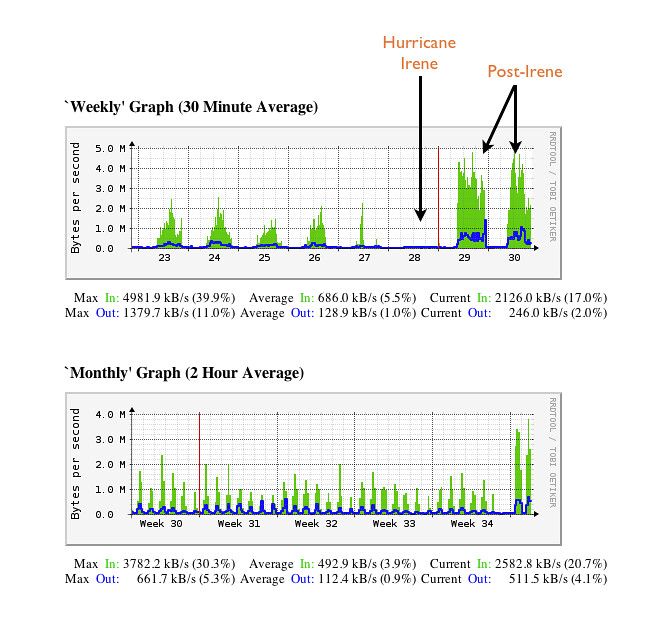 No library damage has been reported, but impressive library use is being documented (see graphic, right) by the Darien Library, where area residents are flocking for respite and reconnection.

Amityville Public Library reopened August 30 shortly after its power was restored, despite hurricane damage it did not specify in its tweets.

The Desmond-Fish Library in Garrison announced on Facebook that, while it is open, Irene had flooded the basement and disrupted the library’s internet service—and therefore its circulation module—prompting a request that patrons limit their borrowing to no more than a few items for the time being.

Part of the Keene Public Library and the town firehouse were literally washed away by the swollen Dart Brook, according to the August 30 Albany Times Union.

Library Journal reported August 30 that Schenectady County Community College’s Begley Library had been flooded, but that the extent of damage was unknown. Additionally, floodwaters had closed the Wells Memorial Library in Upper Jay indefinitely and the basement of the Elizabethtown Library has flooded as well. 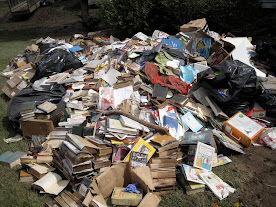 UPDATE: Author Kate Messner recounted on her blog August 31 traveling to Upper Jay after the hurricane, only to discover that the Wells Memorial Library (right) has lost its entire children’s collection save for a handful of books.

LJ also noted that the status of many upstate communities were uncertain since they were cut off by still-rising floodwaters, damaged roads, lack of electricity, and other factors.

UPDATE: The September 1 Schenectady Daily Gazette reported that Schoharie Free Library Director Cathy Caiazzo fears thousands of books, as well as computers and paper records, have been ruined in Irene’s wake. “We lost maybe a quarter of the collection,” Caiazzo said, noting that only the nonfiction collection housed on the second floor survived. Unbelievably, floodwaters apparently uprooted the freestanding shed full of book-sale items, which had been near the library, and replanted it several blocks away.

On a brighter note, citizens in several New York communities were able to find respite at their local libraries. “After the storm, people stormed the Farmingdale Public Library,” Director Debbie Podolski said in the August 29 Farmingdale Patch, noting that area residents utilized every electric outlet to recharge their electronic devices and “communicate with the world.” Before Irene hit, Queens Library invited homebound patrons to phone in to a special Hurricane Call-in Party on August 28 that staff volunteered to conduct from their homes. Homebound Services Program Coordinator Madlyn Schneider said that a dozen patrons “attended,” and several others kept in touch with the library and each other over the stormy weekend through Facebook and email.

ALA Executive Director Keith Michael Fiels shared an August 31 email from State Librarian Martha Reid in which she offered this update:

Vermont is engaged in a massive clean-up following the destruction of the storm on Sunday [August 28]. There are still communities cut-off and airlifts of food and water are underway to some communities. Amazing for Vermont. In the Burlington area where I live all is well but the southern part of the state is chaos and heartbreak. The Department of Libraries has been working hard to contact libraries in towns where the storm hit hardest and we still have not been able to reach some of our libraries, including Killington. Some of these are quite small with limited hours.  Most are in very good shape though there have been some reports of wet basements and carpets.
In many hard-hit towns the library is open for business. Some libraries report heavy use of their internet/Wi-Fi service, use of the library phone, running water,  etc,. and some libraries have extended hours and are acting as the local “community center.”

Some libraries are closed or have no phone service. Amazingly, the libraries in Wilmington and Brattleboro are fine despite massive damage in town.

I am headed to West Hartford today to see the worst damage reported thus far. This library lost an estimated 60% of their collection. The children’s library on the lower level was completely submerged and is a total loss. There is mud on the upper level. The irony of this: The city of Hartford, Connecticut, donated money to rebuild this library when the original building was lost in the 1927 hurricane/flood.

The old firehouse housing the Center for Cartoon Studies’ Charles Schulz Library in White River Junction may have suffered irreparable damage from floodwaters, The Beat reported August 29 on its Comics Reporter website. Anticipating that outcome, a number of volunteers gathered to save the collection just in time. “Brave and tough-minded group moving books out of the library until 3 a.m. as White River continued to rise,” CCS Director James Sturm emailed The Beat at 3:30 a.m. “Got maybe 70% of the stuff out of there, rest moved to higher shelves,” Sturm emailed an elated follow-up five hours later. “This area is a mess, but no water got in the library. Not one book lost.”

Information posted below will be updated as American Libraries learns of more library disaster-relief campaigns.

Let’s face it: Your reputation still precedes you

Avoiding the Path to Obsolescence