A snapshot of librarianship’s never-ending metamorphosis

“Librarians of the future will be knowledge navigators. They will understand digital resources as well as printed books and other formats. Their services will not be restricted by physical location, either of the materials or of themselves.”

That was what Deanna B. Marcum, then on the cusp of creating the Council on Library and Information Resources, predicted 15 years ago about the trajectory of librarianship into the 21st century (“Transforming the Curriculum; Transforming the Profession,” AL, Jan. 1997, p. 35–38). She was right, of course, and the changes keep on coming—as reflected in the emerging workshops, courses, and tracks offered by the 63 ALA-accredited MLIS programs at 58 institutions of higher education in the US and Canada.

One of those late-1990s tweaks to LIS curricula was the addition of a health informatics concentration, which Marcum documented in her article as one of several information-computation courses that the University of Michigan (UM) in Ann Arbor had just launched. Fifteen years later, a master’s in health informatics becomes a full-fledged program beginning this fall at UM, offered jointly by the School of Information and School of Public Health. As such, it joins 26 other health informatics tracks offered by ALA-accredited MLIS programs.

“The graduates of this program will be leaders and innovators at the forefront of a revolution,” program director Charles Friedman stated this past December in announcing the new degree. “It will emphasize the game-changing information technologies that will be used by health care consumers, which means all members of society, to promote health and wellness in entirely new ways.”

In addition to health informatics (as well as its counterparts in the social, community, and cultural spheres of information gathering, storage, and analysis), education for librarianship has added tracks on serving diverse constituencies and the creation and care of digital materials since Marcum’s article appeared. New synergies keep bubbling up, often originating in continuing-education workshops (and now, webinars), growing into individual courses, and ultimately evolving into standalone concentrations.

Collaborative to the core

Librarianship thrives on having in its midst colleagues who are also content specialists. So, it’s only natural that MLIS programs would embrace a cross-disciplinary approach to educating new professionals. Following in the trailblazing footsteps of Rutgers University, whose Graduate School of Library and Information Studies morphed in 1982 into the School of Information, Library, and Communication Studies (and subsequently dropping the “L” word from its name), LIS programs are now in the business of acknowledging the intersection of information gathering, dissemination, and analysis in the missions of librarians, journalists, information technologists, health care researchers, urban planners, and sociologists, among others.

Unsurprisingly, library-education traditionalists lamented the loss of autonomy that such academic mergers seemed to herald. But University of Alabama SLIS Professor Elizabeth Aversa, former director of the school (which is part of the College of Communication and Information Sciences), sees the trend as a strength rather than a weakness. “Communications, with its interests in a free press, in information technologies, in publishing, and in the role of the media in a democratic society, is the perfect place for a school that is concerned with libraries, information science, and the book arts,” she told colleagues during the 2011 Association for Library and Information Science Education Conference. Aversa went on to describe how her SLIS faculty and students can broaden their horizons by sharing resources—laboratories and recording studios, for example—curricula, and research opportunities.

The spectrum of diversity

Service to multicultural, multiethnic, and multilingual populations is a core value of librarianship, but coursework in overcoming the hurdles toward reaching that goal hasn’t always been a part of the LIS curriculum. Gwendolyn Prellwitz, assistant director of ALA’s Office for Diversity and the Spectrum Scholarship Program, told American Libraries she has seen the development of some courses inspired by the enthusiasm of MLIS candidates. For example, Spectrum Scholars Elizabeth Chisato Uyeki and Todd Honma were part of the UCLA Diversity Council that sparked the creation of the “Information Studies 201—Ethics, Diversity, and Change” class in the university’s Department of Information Studies program a decade ago.

The first-ever Tribal Libraries, Archives, and Museum (TLAM) class at the University of Wisconsin–Madison’s School of Library and Information Studies began to emerge from the interest of MLIS candidates enrolled in a group independent study course in Native American cultures and education. One of the students, 2009 Spectrum Scholar Omar Poler, now teaches the class as an associate lecturer at the graduate school.

A member of Wisconsin’s Mole Lake tribe, Poler told AL he “discovered the library and information science profession” in 2007 as he delved into microfilmed documents at the Wisconsin Historical Society to research an 80-year period in his tribe’s history. Among his finds were handwritten letters from his great-grandfather Henry Poler to the Bureau of Indian Affairs seeking basic supplies to stave off starvation within the tribe. Poignantly, it was Poler’s father, Dan, who had conducted the archival project 25 years earlier as part of his work in helping to establish and maintain one of the first tribal libraries in Wisconsin.

At San José State University’s SLIS, foreign-language instruction has become an elective component in the school’s advancement of library service to diverse populations. French and Spanish courses were added to the SLIS curriculum this past fall in collaboration with SJSU’s Department of World Languages and Literatures. At summer’s end, the 100% online SLIS is adding entry-level courses in Chinese language and culture, which is believed to be a first for LIS education.

Service to people with disabilities—including limitations that are mild to moderate and therefore not covered by the Americans with Disabilities Act—is the goal of Project ALFA (Accessible Libraries for All), a pilot LIS project funded by the Institute of Museum and Library Services (IMLS). Project ALFA is teaching 30 MLIS candidates at the University of Alabama in Tuscaloosa and Wayne State University in Detroit about the needs of people who are “extralegally ably challenged” (ELAC), explains Alabama-based principal investigator Laurie Bonnici, giving as an example “someone with peripheral arterial disease, who may have a hard time using a touchscreen device.” She and Stephanie Maatta Smith, her ALFA counterpart at Wayne State, have created an LIS track comprised of two electives as well as field trips during which students use materials from a sensory-perception alteration kit to simulate the experience of impaired vision, hearing, and mobility. The kit contains safety goggles, a blindfold, several pairs of reading glasses, several kinds of earplugs, cotton balls, and a pair each of latex and cloth gloves.

ALFA Fellow Christina Leukothea Golm blogged March 29 at Universal Access what happened when she simulated blindness on the exhibit floor during the 2012 ALA Midwinter Meeting in Dallas. “When we went to the vendors asking them about their accessibility features, they talked to [ALFA partner] Kristynn , not me. I wanted to be in the conversation, but I usually could not catch the social cues of when it was time to talk. At one point, the vendor asked Kristynn what was my shirt size. Why not ask me? I was standing right there.” Conducted in conjunction with the Alabama Public Library Service and the Florida Department of Education’s Bureau of Braille and Talking Books Library, the program will produce its first graduates in December, and Bonnici says she may soon seek funding to “extend the ELAC concept to school libraries.”

The merger of some LIS programs with schools for informatics in recent years (with another under consideration at Indiana University Bloomington and Indiana University–Purdue University Indianapolis) reflects the expansion of librarianship from organizing and disseminating knowledge to helping to create and analyze it. Now, a relatively new track is emerging to support both: data curation.

The University of Illinois at Urbana-Champaign (UIUC) library school launched its data curation track in 2006 with a focus on scientific information, according to Carole Palmer, LIS professor at UIUC. “As a result of research we were doing in 2002 on high-impact information in neuroscience, we recognized the need for data professionals to work together with scientists on the information problems of collecting and organizing data, making it accessible and usable,” Palmer said. “We saw how our expertise could help scientists do less data management and focus more on solving scientific problems. But digital data is high risk—extremely fragile and with few standards of good practice.”

In 2008, UIUC added digital humanities to the data curation track and in June was awarded a $500,000 grant from the Institute of Museum and Library Services to create master’s- and doctoral-level programs in sociotechnical data analytics. Associate Professor Cathy Blake praised the initiative (nicknamed SODA) for its “dual emphasis on social and technical aspects of data analytics” and potential for training information professionals “who can effectively manage and analyze Big Data.”

An up-and-coming specialization, data curation was launched this summer as a post-master’s certificate in digital stewardship by the Simmons College Graduate School of Library and Information Science in Boston, and, undoubtedly, is destined to become part of other LIS programs. The interest of library educators in the specialization is likely to be spurred by heightened federal interest in maintaining the safety of and accessibility to data encompassing such areas as environmental, economic, and health care research.

Coming around the bend

A look at two blips on the LIS radar may be indicative of where librarians will be needed and, therefore, what graduate schools will need to teach:

Professor William Wong of Middlesex University in the UK has spent the summer at the University of British Columbia School of Library, Archival, and Information Studies collaborating with Assistant Professor Victoria Lemieux on research into visual analytics for financial systemic risk analysis. “Imagine,” ALA Office for Accreditation Director Karen O’Brien told AL. “Information studies at the center of helping avoid the next financial meltdown.”

This generation of library students can easily imagine that scenario. 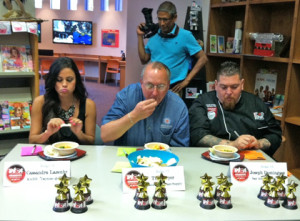 An Old Friend in the Library

When rethinking service imperatives, let compassion be your guide