Many served as lifelines to residents without power

Beyond temporary power outages and minor wind and water damage, libraries along the Atlantic coast weathered Superstorm Sandy fairly well, considering all the flooding and destruction inflicted on homes and businesses. Although some areas of central New Jersey were still without power six days after the storm, many public libraries in affected states were powered up and serving as community support centers for residents without electricity, internet access, or heat. 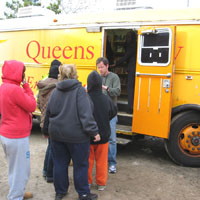 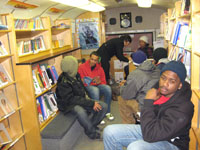 The worst library damage occurred on the Rockaway Peninsula, New York, just across Jamaica Bay from the JFK International Airport. Five branches of Queens Library had serious flood damage. The Arverne and Peninsula branches were devastated by four feet of flooding and will be closed indefinitely to allow for major reconstruction and replacement of all materials. Water also damaged carpeting, books, computers, and furniture in the Broad Channel, Howard Beach, and Seaside branches. The library sent its bookmobile—complete with personnel trained in social services, disaster relief, and health care—to serve the information needs of Rockaway residents (see photos above). Queens staffers are also working with area shelters to bring children’s programs to families and offer assistance in filing FEMA claims. “We’re staying true to our mission of getting information to people,” Queens COO Bridget Quinn-Carey told American Libraries.

Some branches of the New York Public Library were closed due to power outages, but none reported any structural damage; all but five (Soundview, Van Cortlandt, Hamilton Fish, Dongan Hills, and South Beach) will be open on November 5. The Brooklyn Public Library has nine branches closed temporarily for lack of power with only one, the Coney Island Learning Center, closed until further notice.

Updated November 12, 2012: The basement of the Riverfront branch of the Yonkers (N.Y.) Public Library was flooded. River water poured into the space to a height of five feet, knocking out power and ruining supplies and offices. The entire basement will have to be gutted and rebuilt.

The Hoboken (N.J.) Public Library’s basement was flooded with 4 feet of water that damaged the heater and other electrical equipment that had to be repaired before it reopened on November 15.

The main branch of the Jersey City Free Public Library sustained approximately $1.4 million in water damage to books and equipment located in the basement. It remains closed indefinitely.

The Atlantic City (N.J.) Free Public Library, located only a few miles northeast of where Sandy made landfall on October 29, suffered only minor damage and reopened November 3, Public Information Officer Don Latham told American Libraries. The Atlantic City Historical Museum, which the library manages as a special collection, took in a little water and is temporarily closed.

Other libraries in New Jersey are providing status updates to the New Jersey State Library, which is maintaining an Excel spreadsheet of closings. As of November 2, only the Brigantine branch of the Atlantic County Library System reported any damage, but some areas could remain without power through November 12. A complete damage assessment cannot take place until power is restored.

The Healey Library at the University of Massachusetts in Boston suffered damage to its roof, which let some water leak into classrooms on the upper floor.

The New Jersey Library Association has set up a Rebuilding New Jersey’s Libraries Fund to help raise money for any library in the state with significant loss of materials or equipment. Anyone across the US can contribute through the NJLA website.

Updated November 19, 2012: ALA’s American Association of School Librarians encourages schools to apply for a Beyond Words disaster relief grant. The grant program, funded by the Dollar General Literacy Foundation, can be used to replace or supplement books, media, and library equipment in school libraries affected by natural disasters.

Simon & Schuster has also offered 500 “best of” titles to any public or school library damaged by Hurricane Sandy in order to help in the restoration of their collections.

Georgia author Renea Winchester is mobilizing authors in the South to send copies of their books to any library affected by the storm that needs new materials. Libraries can find details on her AdviceForAuthors blog. Children’s author Kate Messner has set up KidLit Cares, a website that is holding an online talent auction to benefit the Red Cross relief effort. Agents, editors, authors, and illustrators have donated various services to be auctioned off to the highest bidder.

In many ways, Superstorm Sandy served as an object lesson for city, county, and state officials who sometimes forget the multiple roles public libraries play in an emergency like this. Rita Gelman, assistant director of the Hendrick Hudson Free Library in Montrose, New York, said in the November 1 Croton Daily Voice, “Every outlet and seat in this building right now is full. We’ve even set up extra tables in the community room so people can have extra tables and desks. For a lot of people it was the first opportunity to plug something in.”

That was the case for Curtis Vielstich, a resident of Lopatcong Township, New Jersey, whose thank-you letter was published in the November 3 Easton (Pa.) Express-News. After the power went out at home, Vielstich and his family sought light, heat, and a warm welcome at the Phillipsburg (N.J.) Free Public Library. He wrote: “By being so helpful and friendly, the staff has helped lift our morale. Also, by being a place where the public could meet, we have been able to share experiences with others in the same situation. This library and staff truly are an asset to the community.”

Rutgers library student Bethany O’Shea operated the volunteer and visitor sign-in desk at the university’s Busch Campus shelter in Piscataway, New Jersey, which was set up for victims of the storm in Atlantic County.

A story by library consultant Kathy Dempsey made it into the popular Boing Boing blog on November 1. As she went to volunteer at a Red Cross shelter in Medford, New Jersey, she grabbed a box of donated books and set it up at the shelter as a “Little Free Library” with some colorful fabric and a sign that assured guests that they were welcome to keep whatever they liked. One shelter resident told a newspaper reporter afterwards that the best part of the shelter was the “books and magazines,” along with the food and coffee.

Janet Dunn, children’s librarian at the Westwood (N.J.) Free Public Library, organized a display of hurricane books with children in mind. “They are going like hotcakes,” she said. “Kids see the books when their parents are checking out. It’s like impulse shopping,” Dunn told the Pascack Valley Community Life newspaper. “It keeps the parents sane too.”

Allan M. Kleiman, director of the Montville Township (N.J.) Public Library, summed it up best in a Facebook post: “The library is packed today but you could have heard a pin drop; I think everyone is exhausted. We coordinated our opening with the Township Shelter. We opened early; they are staying open tonight. We delivered books and magazines to the shelter so people could have something to read and look at besides personal devices. It makes me proud to be a library professional to see how much positive we add to the community in times of need. Libraries are the solution in situations like these; not the problem.”

Anchorage partners with the walking dead to teach disaster preparedness