Another milestone, measured in quarter turns

Well, of course, I felt obligated to give it one more try, so I googled “100.” The first entry, naturally, was Wikipedia. It was followed closely by the Z100 radio station in New York and a search engine bafflingly called 100.com (which seems rather pointless), and then in 10th position—seriously—a listing for the MARC 21 format for the 100 field. If Google retrieved that because it “knows” I’m a librarian, even though over the decades I have had nothing more than a passing relationship with cataloging, then it’s doing a much better job than I believed.

Interspersed through the results were also numerous lists: 100 top this, 100 best that, 100 most, and so on. It’s a nice round number, and there’s a sense of completion, of circularity, associated with it.

This 100th column comes smack on top of my 10-year anniversary writing it; this double circle has given me an opportunity to reflect on what has been, what is, and what could be, and I’ve arrived at the conclusion that a column called Internet Librarian is no longer necessary. Not yet outdated or an anachronism, fingers crossed, but certainly not groundbreaking territory either. I was comfortable saying seven years ago (Nov. 2005, p. 62) that we’d crossed the Rubicon and you can’t really be a librarian anymore without the internet. And, we know now, there’s no way back.

Thus, with profound fondness and gratitude, I hereby retire that field. As I do, it’s only fitting to acknowledge and thank my friend and predecessor, Karen Schneider, who originated this column and did a characteristically splendid job over many years when the internet was young, the web was a novelty, and we had untrodden ground to explore. Heartfelt thanks, Karen—drinks are on me at Midwinter.

So, am I done here? No such luck. The editors at American Libraries have agreed to allow me the privilege of launching a new column, a chance for me to have a broader territory in which to play.

This won’t necessarily mean I write nothing further about the internet; there are, however, lots of other things to say, think, and ask about. I feel as though I’ve spent more time here asking questions and providing another way of thinking about things than providing specific ideas or techniques (though there have been a few of those along the way). An occupational hazard for an educator, I guess.

I have truly loved writing these columns, even the ones I struggled with, and people have generally been very kind in their comments about them—all of which will continue, I hope, going forward. This column, and American Libraries, has been very good for me and to me, and I can’t wait to embark on the next round of this adventure.

As for that new title: I completely fell into the “but that’s another story” tag line with which I’ve signed off every column. The first time it just sort of fit, and then the second one did too. Soon it became a thing. I also say it all the time; ask my students. So now, happy me, I get to tell some of those other stories . . . but that’s another story.

JOSEPH JANES is associate professor at the Information School of the University of Washington in Seattle. 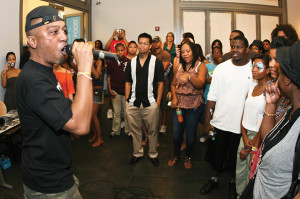 Live at Your Library!

10 librarians are recognized for service to their communities, schools, and campuses