More than five years after the start of the Great Recession, school libraries in the US are in crisis, their budgets constricted and their staff short-handed or nonexistent. Professional staff positions are left vacant or filled by uncertified personnel, materials budgets slashed. Many library programs have been eliminated. Most of these actions are taken at the administrative level, outside the control of both library supervisors and building-level school librarians.

More than five years after the start of the Great Recession, school libraries in the US are in crisis, their budgets constricted and their staff short-handed or nonexistent. Professional staff positions are left vacant or filled by uncertified personnel, materials budgets slashed. Many library programs have been eliminated. Most of these actions are taken at the administrative level, outside the control of both library supervisors and building-level school librarians.

Often, the only person who can speak out against such actions at the district level is the library supervisor. Yet just as other government managers are trying to cope during a weak recovery, these district supervisors are expected to do a lot more with a lot less and are forced to pick up most of the slack themselves. So says a new study, the first national survey of district school library supervisors conducted in more than half a century.

The Lilead Project survey (rhymes with “Iliad”), involved questionnaires sent to supervisors nationwide in districts with 25,000 or more students. It was funded by the Institute of Museum and Library Services (IMLS) and conducted during autumn 2012 by a research team at the University of Maryland’s College of Information Studies. The survey had a very high response rate—61%—among the 290 districts that participated and included the largest districts in the country and in each state. The responding districts represent 38 states. The survey will be repeated this autumn with the same kinds of school districts. The last similar survey was conducted in 1960. 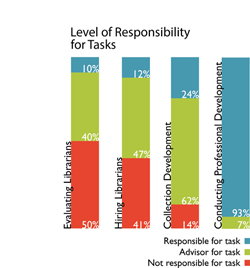 The fact that district school library supervisors have markedly fewer resources, on average, is clear. A higher percentage report cuts rather than increases in essential funding such as district funding and building funds, while technology funding is barely staying even: 40% of respondents had cuts in district funding versus 6% who had increases, and 42% saw cuts in their building funds versus 4% who had increases. Technology funding, meanwhile, was a wash in 2012: 22% had cuts, 21% had increases, and the rest saw no change. Staffing was under siege as well: 42% reported a drop in building-level staffing, 33% saw a drop in district-level staffing, and 34% had a smaller candidate pool, as opposed to 8%, 5%, and 16%, respectively, who saw increases. Moreover, more schools now have unqualified staff or volunteers running their libraries because many certified librarians are gone.

Stories told by respondents are both revealing and grim:

Others were more succinct:

Changes in education at the national level have also forced changes at the district and school level, including the library supervisor position. Not all of these changes are positive. “Over the years, my ability to communicate directly with building principals in their monthly meetings has been hampered due to new state and federal initiatives, i.e. No Child Left Behind and Common Core, and there is not time for me to present as I used to; this causes [the school principals] to sometimes forget about library programming, ” said one library supervisor.

Nor are principals the only ones who forget why schools need libraries, according to the survey. “Our state does not require schools to have a librarian or media specialist, certified or not certified. In many cases, a paraprofessional or parent volunteer is in most schools to just check out and shelve books,” one respondent commented.

Said another, “Administrators need to be informed of the importance of using professional librarians to the fullest. Many administrators, principals, and teachers are not well informed of what the role of the librarian is.” This is despite evidence that properly staffed, well-stocked school libraries can overcome even low socioeconomic status to help improve children’s school performance (“The Void in Charter Schools,” American Libraries, June 2013, p.26–30). Bottom line: If school districts want student performance to improve, having full-time certified library media specialists and properly stocked and funded school libraries is just as important as having certified teachers.

How library supervisors spend their time

Survey respondents reported an increasing emphasis on content standards and students’ information literacy skills. They also reported spending more time communicating the library’s role in improving student achievement and encouraging school-level librarians to collaborate more with classroom teachers. That’s a challenge when so many librarian positions have been traded for library clerks or eliminated altogether. Still, respondents saw leadership as their most important responsibility; 83% rated their leadership responsibilities as extremely important or important. Advocating for library programs and developing a vision and mission for the district’s program were the most important aspects of leadership. Other tasks rated high in importance were handling book challenges and censorship issues and managing library automation systems.

Personnel responsibilities were also seen as very important, particularly meeting with, advising, and offering professional development for school-level staff—especially when that staff is underqualified. “My priority is to support and train the building librarians, particularly the elementary people, since they are all classified employees, most with no teaching degrees and no library background at all,” one supervisor said. Another observed, “More support is needed with the librarians who feel they are not teachers, they are librarians. They need explicit guidance in their teaching practices. They receive support from me, but it is not enough.”

Just because 93% of the responding supervisors say they are responsible for professional development doesn’t necessarily mean the topic gets a lot of cooperation or interest. Explained one supervisor, “Over 60% of those staffing our libraries now do not have a university background in library science, nor do they see themselves as part of the library profession as a whole. Therefore, these ‘media specialists’ see little value in attending professional development for ‘librarians’ or belonging to professional organizations for librarians. Programs across the country are struggling to advocate for libraries in schools, but I feel this particular practice has made it extra difficult to maintain and promote quality programs in our schools.”

Sometimes the school librarians (or their substitutes) aren’t to blame: “At the building level, due to implementation of [district policies] and a decrease in funding, library personnel (including librarians and clerks) are being pulled from their regular assignments, and that decreases the amount of time for them to spend on library duties,” including professional development, said one respondent.

“I am a building-level teacher-librarian who is [also] the senior librarian in the district and has a role of mentor and technology guide for the other teacher-librarians in the district. My ‘real’ job is to teach research, promote reading, and manage the school library for a campus of more than 2,500 students,” wrote one such respondent. Her school district has more than 25,000 students. That’s large enough that using the recommended rule of thumb for how many librarians she should have in the district (one full-time state-certified library media specialist plus one aide, clerk, or library technician for every 750 students), she should be supervising a minimum of 32 or 33 school librarians full time—the equivalent of an entire classroom of librarians. But she doubles as a school librarian in addition to being a district-level supervisor.

Library supervisors are more stressed than ever

In some cases, hard-pressed districts are relying on the good will of library supervisors to continue on a volunteer basis. “I am semi-retired, and only work part time. The district could not afford to replace me with a full-time position when I retired, so I am doing this to try to hold things together for the time being. It’s simply not enough,” one respondent said.

Predictably, all this has taken its toll on the district-level library supervisors, whose number continues to shrink in some areas. Speaking for many other survey respondents, one remarked, “We continue to lose supervisors in school districts because [school districts] fail to understand the relationship that a good library program supports academic achievement.”

“As a result of the extremely limited time, and no support staff, I am limited in what I can accomplish,” said another.

Many respondents were crying out for support—not only from their own districts in terms of resources or from legislators when it came down to budgets, but also from their own peers. “I need help planning professional development for my school-based media specialists. I’m the only [person] planning their professional development, and it would be nice to have others to help me plan,” one said.

In general, respondents said they need more training in leadership, teaching and learning, supporting state standards such as Common Core, managing personnel, and financial responsibilities. They said they also wanted additional instruction on specific topics in technology and technology integration, such as implementing ebooks and e-readers into collections, new service models such as BYOD (bring your own device) and one-to-one technology programs, and long-range planning for digital content and tools. 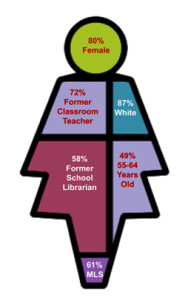 Profiling supervisors and their districts

The typical district library supervisor is female, white, a former classroom teacher, and a former school librarian with an MLS degree. About half are between the ages of 55 and 64, the survey found. However, figuring out who the library supervisor is in a given district can be a real challenge because of the multiplicity of titles under which the position exists. According to the data, districts use 11 different titles for the supervisor position (see word cloud figure). The top three titles are library coordinator, director, and supervisor.

Though the name for most district library offices is a variant of “library services,” survey data reveals more than 20 different department names used. Some districts split responsibility for library programs among multiple departments. More than 90% of respondents are located somewhere within the departments of Curriculum and Instruction (71%) or Educational/Instructional Technology (22%).

One clear message from this first Lilead survey is that district supervisors feel isolated and would welcome opportunities for professional development and peer support. In response to this, the Lilead Project has developed two initiatives. The first is the Lilead Network, an online community open to any individual responsible for library programs and services at the district level (lilead.umd.edu). This network allows supervisors to discuss current issues, present ideas, pose questions to peers for comment, and support fellow library supervisors.

The second is the creation of the Lilead Fellows Program, also funded by IMLS. The Fellows Program is an intensive 18-month professional development program in which 25 supervisors chosen from all over the country will work together on current issues in their school districts. They will brainstorm and implement new strategies on issues dealing with 21st-century skills implementation, technology integration, and advocacy. Fellows will work in small groups, both in person at conferences and virtually between conferences from January 2015 to June 2016. The program will begin at the 2015 ALA Midwinter Meeting and Exhibits in Chicago.

A fond farewell to the Internet Public Library 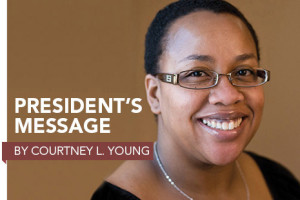 Individually and collectively, we make a difference