Digital resources in the form of ebooks, audiobooks, and other media are beginning to take flight—literally—across the country by way of airport library branches.

Branches are have popped up in airports around the country, including Philadelphia International; Seattle–Tacoma International; Manhattan (Kans.) Regional; Fort Lauderdale–Hollywood (Fla.) International; Boise (Idaho); and San Antonio International, over the last couple of years, and more are in the works. Library officials say these branches are cost-effective and promote not only the library’s digital resources but also encourage travelers to visit their local branches when they return home.

The digital branches have taken different forms, some offering downloadable materials to nonresidents just passing through, while others require borrowers to be a resident of the city where the library is located.

“That’s how we lure you in,” she tells American Libraries.

She says awareness of the digital collection has grown significantly over the last year, but library officials are still working to get the word out to patrons. In fiscal year 2014, the library saw a 36% increase in usage of its digital collection, Cowart says.

“If it were its own branch, it would be the largest in terms of circulation,” according to Ignacio Albarracin, SAPL digital services coordinator.

Albarracin notes that a study by the Pew Research Center shows that more than half of library cardholders nationwide were unaware that their libraries offered ebooks. “It made sense to promote the digital resources in the library, but we felt it was important to promote ebooks outside the library,” Albarracin says.

Cowart says the decision to install the kiosks has given the library a lot of bang for its buck, costing about $15,000 for each of the two machines.

The Boise (Idaho) Public Library (BPL) also recently installed its first computer terminals at the Boise Airport, but rather than kiosks, the library opted to set up six 23-inch touchscreen computers that give travelers access to the library’s website.

Denise McNeley, BPL operations and outreach manager, said two of the touchscreens are dedicated to digital magazine downloads, two are dedicated to web browsing, one provides information about the city of Boise, and another provides a selection of children’s ebooks. The entire project cost the library less than $25,000, she says.

The airport branch, installed in September, has gotten a huge response, McNeley says. “A week ago, I heard there was a line of people waiting to get into the space,” she says. “It’s a relatively new concept, but I think it’s really going to take off.”

The biggest difference between the Boise and San Antonio airport branches is who can access the content. McNeley says the Boise branch offers digital access only to Boise residents. In San Antonio, nonresidents are able to get temporary access to the library’s digital offerings.

SAPL lets library card holders check out about 20 items for three weeks. “We just limited the amount for the guest pass user, so they’d get to enjoy the experience but have an incentive to get a card,” Albarracin says.

The popularity of the download stations has prompted both libraries to consider establishing more throughout the airports and in other parts of the city. 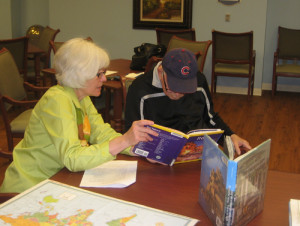