Welcome to Tales and Travel, a recreation program designed to encourage participation, conversation, and expression among Alzheimer’s and dementia patients by simulating the act of traveling to different countries and US states. While seated around a communal table at one of the six nursing home, assisted living, and memory care facilities that Degnan and her Library On The Go volunteers visit bimonthly, between eight and 15 patients attend an hourlong program where they are asked to read, summarize, and share folktales, facts, and personal experiences. “Bringing services and enrichment to people’s lives—especially those who are unable to do it themselves—that’s huge,” Degnan says.

Tales and Travel was developed by Mary Beth Riedner, a retired librarian whose husband Steve was diagnosed with a rare form of early-onset dementia in 2006. As she learned about different types of dementia and extinguished any previous biases toward the disease, she began to notice an underserved population. “I thought, surely the library is doing something for people with dementia—and I found nothing,” says Riedner. She decided to start a program at a memory care facility in Elk Grove Village, Illinois, close to her home in Schaumburg, and the initial feedback inspired her to keep going. “The very first program I did, the program director said to me, ‘How did you get Dolly to smile?’” Riedner noticed that even though patients were at different levels of alertness and engagement, “almost everyone browses through the books.”

Riedner brought the program to GBPL in 2011 and since then it has received funding and national recognition and has expanded in size. “It’s an activity that improves the quality of lives,” says Riedner. “That’s what you do with Alzheimer’s—you worry about today.”

“It’s very hard to look at our services outside the caregiver,” says Mary Ann Urbashich, associate director of the Alzheimer Association’s Green-Field Library. “Everything we offer is for the family, which includes the person with the disease.”

GBPL is working hard to buck this trend. “Our top leadership team recognizes the paradigm shift from a focus on the collection to a focus on the community,” says Miriam Lytle, division chief of community services and program development. “That means serving our residents wherever they may be, including those who cannot enter our doors due to mobility, health, or poverty.”

Tales and Travel is reflective of GBPL’s mission to meet people where they are, as is the fact that the program caters to Alzheimer’s and dementia patients at varying stages of their disease and levels of ability. When developing Tales and Travel, Riedner consulted the International Federation of Library Associations and Institutions’ (IFLA) Guidelines for Library Services to Persons with Dementia, and email Denmark-based co-author Helle Arendrup Mortensen for advice. Within two weeks, Riedner had written 24 excursions for her program—and would write another 12 after teaming up with GBPL. The IFLA guidelines readied Riedner for challenges, including physical ones that would help her communicate with her audience more effectively: maintaining eye contact, using simple language, and being a creative listener.

Libraries don’t need such a formal curriculum to make a difference. Ann Moore of Schenectady County (N.Y.) Public Library (SCPL) would simply load a variety of books on a dolly and take them to the Niskayuna Memory Care Facilities’ Brookdale Clare Bridge location, a local memory facility, on a monthly basis. “I was very nervous because I just didn’t know what to expect,” she says. She would go on to administer services to residents with Alzheimer’s and dementia for six years—about 12–20 higher-functioning individuals in her group at any given time—but says she wished she had more formal training before working with this unique population.

“Part of it was just trial and error,” says Moore. She learned that books about animals, especially cats and dogs, were big hits among her audience. Books covering travel, World War II, Jackie Kennedy, and weddings were also popular. Women always outnumbered men in the program—nearly two-thirds of those with Alzheimer’s disease are women—and the men preferred highly illustrated books of cars and motorcycles. Some patients would doze or stare out the window, but others “who were silent for months would have something to say.” Moore also learned how important consistency was to the patients in her program, and how much joy and entertainment her monthly visits brought to the residence. “They might not have known my name but they recognized me as The Library Lady,” Moore says.

Moore’s experiences prompted her to pen her own set of guidelines for working with those affected by Alzheimer’s and dementia that seemingly go hand-in-hand with IFLA’s advisements, not the least of which are to “keep a sense of humor” and “remember that not every patient is the same.”

Ultimately SCPL’s outreach program for Alzheimer’s and dementia patients was cut in 2012 due to budget and staff constraints. “It was a lot of work and it took people out of the building,” Moore explains. “One of the issues we ran into was that you’re not reaching a lot of people. I would go once a month and see 20 people, whereas the story time here brings in 20—40 people a week.” Moore adds, “Library boards want numbers.”

GBPL, which was awarded an American Libraries Association (ALA) Carnegie-Whitney Grant, has so far been able to preempt threats to their program. Riedner says the grant, along with a partnership with Dominican University in River Forest, Illinois, has allowed her and GBPL to fund bibliographies for resources to sustain Tales and Travel and to make the program accessible to any library professional or caregiver that may want to replicate the experience. Anybody with an internet connection can watch the Tales and Travels introductory video or download excursion guides, passport templates, and logos for the program hosted on Dominican University’s website.

“We would love to see this go nationwide,” Degnan says. “It’s still a beautiful program if it’s coming from a huge library or a small library.”

“We haven’t totally given up,” says Moore  of SCPL’s outreach program for Alzheimer’s and dementia patients being cut. Today SCPL branches only host Alzheimer’s support group meetings for caregivers, but Moore thinks the program could reemerge under the right circumstances. She also thinks it would be possible for some libraries—the right libraries—to host on-site programs rather than lug library materials to nursing homes, assisted living facilities, and memory care centers.
“It’s possible, but there are more complications,” says Moore. Having reliable transportation, finding a time when patients are most alert, and having a meeting place where the group “wouldn’t be shushed” are just some minimum requirements to consider. A steady stable of volunteers is also critical to outreach and, Moore says, the sad reality is that many library volunteers prefer to work with the mentally alert.

Lytle confirms that volunteers are at the heart of Tales and Travel’s success—not to mention the success of the library at large. GBPL had more than 600 volunteers last year, totaling more than 12,000 hours. Degnan is working to better train and consolidate a select group of volunteers for Tales and Travel, hoping that eventually the program will be entirely volunteer-led. She would like to see a minimum of three volunteers running each session—helping to turn book pages and draw out conversations, while giving patients individualized attention. “Some people have an interest but have never worked with this population,” Degnan says.

That’s just where Riedner was at the very beginning of her journey.

Riedner’s husband Steve died this past January at the age of 65. He had never participated in the Tales and Travel program—“books were never his thing,” Riedner says—but his condition was what motivated her to create a program to help Alzheimer’s and dementia patients retain their own personhood. As such, Riedner was the recipient of the Association of Specialized and Cooperative Library Agencies’ (ASCLA) Exceptional Service Award in 2014. While she is currently taking a break from advocating for Tales and Travel, she plans to return to it. She also hopes the next step is some type of academic research study to tie the benefits of programs like Tales and Travel to patient outcomes.

Reaching more of the millions affected by Alzheimer’s and dementia is also a high priority. “There are so many hidden people. Not everyone is in a facility. We started with these facilities because it was an easy way to reach many people,” says Riedner.

Degnan is working to reach some of the overlooked patients and caregivers in her own community by developing a take-home kit version of Tales and Travel for GBPL. These kits will ideally contain five to six books and souvenirs related to a specific country or US state, and will be available for loan to patrons for 28 days.

Tales and Travel’s reach and legacy may soon grow in other libraries thanks to the tireless stumping Riedner and GBPL have done on behalf of the program at the Public Library Association (PLA) Conference, the Illinois Library Association (ILA) Conference, and other roundtables, presentations, and webinars. Lytle recounts an email she received from Kathy Clair, director of the Reddick Public Library District (RPLD) in Ottawa, Illinois, following an ILA session dedicated to Tales and Travel. Clair was “in tears and giddy” after being introduced to the impact of Tales and Travel and wanted to know how to implement the program at her own library. RPLD subsequently applied for and received a Library Services and Technology Act (LSTA) grant to bring Tales and Travel to their community.

“Tales and Travel has been designed so that any library in America can pick it up and run with it. It is shelf-ready,” says Lytle. And that is important to Lytle as the ways in which libraries provide services—and the people libraries are trying to reach—change, and ultimately expand. “We see that 21st century libraries can only remain viable if they are fully focused on serving their communities,” says Lytle, “inside, outside, and online.”

TERRA DANKOWSKI is a freelance journalist living in Chicago. 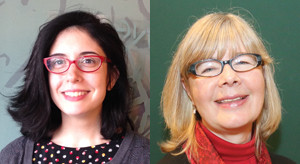 Finding the power in co-mentoring 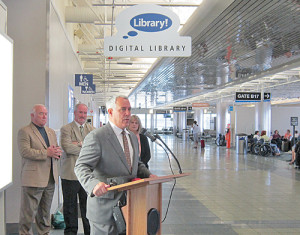