We need your help now

All across the country, millions of children are returning to school. For many of those students, their education and success are being threatened.

Unfortunately, much of the blame lies at the federal level. No Child Left Behind, the 2001 reauthorization of the Elementary and Secondary Education Act (ESEA), reduced targeted funding for school libraries and eliminated language that recognized school librarians as an integral part of the school’s instructional program. Federal dollars used to support library activities under the act dwindled until they were eliminated altogether over five years ago.

Library supporter Sen. Jack Reed (D-R.I.) did manage to designate funds for school libraries, first through Improving Literacy Through School Libraries, then the Innovative Approaches to Literacy. But these are small grant programs and don’t adequately support the critical role school libraries play in a student’s education.

This year, Reed, Sen. Sheldon Whitehouse (D-R.I.), and Sen. Thad Cochran (R-Miss.) worked to bolster federal support for libraries through S. 1177, the Every Child Achieves Act of 2015 (the Senate bill that would reauthorize ESEA).

Because of their efforts, the Senate bill includes several new provisions in support of libraries, including:

As the House of Representatives and Senate prepare to compromise on their differing versions of ESEA reauthorization, we need your help now to ensure that we can maintain the library provisions already included in the Senate bill. Please contact your senators and members of Congress and ask that they contact members of the conference committee (Sens. Lamar Alexander and Patty Murray and Reps. John Kline and Bobby Scott) to encourage them to maintain library provisions from S. 1177 in the conference agreement to reauthorize ESEA.

We have a historic opportunity to win back federal support. But we need all hands on deck. All libraries—academic, public, and school—are part of an ecosystem that supports literacy and lifelong learning for all. Wherever we work, we must support one another.

In October, ALA will be launching its new Libraries Transform public awareness campaign. At its heart is the message that libraries transform the lives of individuals and transform communities. It is hard to think of anything that has more impact on the lives of students than a good school library. For millions of children, libraries make the difference between failure and success.

For more info on the campaign, see cqrcengage.com/ala/home. 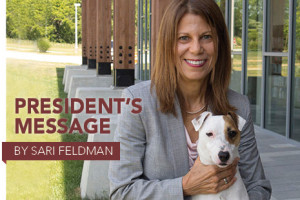 What it is and how to sustain it