April 1
Census Day, or the date by which every home will receive an invitation to participate in the 2020 Census.

1790
Year the first decennial census was taken, as mandated by the US Constitution.

$1.5 trillion
Estimated amount in federal funds to support state, county, and community programs that is determined by US Census data.

13
Number of languages that online and phone responses can be completed in, including Arabic, Haitian Creole, Russian, Tagalog, and Vietnamese.

248
Number of area census offices the US Census Bureau opened in 2019 to support a complete count.

74%
Percentage of US households that mailed back the 2010 Census questionnaire.

1 million
Approximate number of children 5 years old and younger who were undercounted by the 2010 Census.

86%
Percentage of Detroit’s population that lives in hard-to-count neighborhoods, the largest proportion of any major US city.

Myth: “My information will be shared or used against me.”

Fact: By law, the US Census Bureau cannot share personal data with any other government or law enforcement agency.

Myth: “I can’t fill out the census because I’m not a citizen.”

Fact: The census counts everyone living in the US.

Myth: “I can’t complete the census because I don’t have internet access.”

Fact: The 2020 US Census will be available online, by mail, and by phone.

Myth: “I have to answer every single question on the census.” 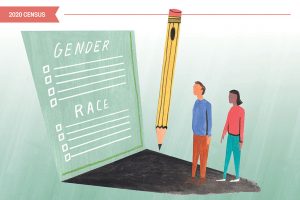