Use Alexa and Google Assistant for teaching and communicating

Both Alexa and Google Assistant let you run a set of tasks with a single voice command. For example, when you say, “Hey, Google, good morning,” Google Assistant will execute a predefined sequence that can include: adjusting your lights and thermostat; providing a weather report; estimating your commute time; looking up your calendar; providing reminders; playing news, radio, or music; or other actions.

Although VAs are usually associated with smart speakers such as Amazon Echo and Google Home, they are also available as mobile apps and come as default programs on mobile devices. Siri and Google Assistant are integral parts of their corresponding mobile platforms.

After a decade of development, conversational AI and voice technology have progressed beyond early infancy and moved into a phase of mass adoption. Smart speakers are now a common household item, with more than 133 million in use in the US.

More than 133 million smart speakers are in use in the US.

Both Amazon and Google make their proprietary technology available to independent developers to learn and build new applications on their platforms. These third-party applications, called skills on Alexa’s platform and actions on Google’s platform, let companies and individuals build their own voice applications tailored to their products and services. With an eye toward cultivating AI literacy through VA technology, some new library and educational applications are emerging.

In K–12 settings, the commercial vendor Bamboo Learning develops Alexa skills to help educators. One of its skills, Highlights Storybooks, is a collaboration with Highlights for Children magazine and features animated story narration with accompanying exercises to support language acquisition.

Bamboo Learning’s collection of Alexa skills can serve as self-guided educational activities, supplementing traditional teaching and learning. These and other learning-oriented Alexa skills could be useful in classrooms, school libraries, and public library programs, much like the self-guided classroom reading stations of yesteryear.

Companies such as Pellucent Technologies are helping public and academic libraries build Alexa skills or Google Assistant actions, including the integration of Libro from ConverSight.ai into existing library systems. Patrons can use Libro’s Alexa skill to search a library catalog for resource availability; recall, renew, or place holds on library materials; find an item location in book stacks; or ask about library hours and events.

Similarly, EBSCO has developed an interface that allows users to access content from its discovery service via Alexa and Google Home.

Collaboration between libraries can further pave the way for future trailblazing in AI literacy, learning, and discovery as library and education institutions seek to stand on the cutting edge of tomorrow. 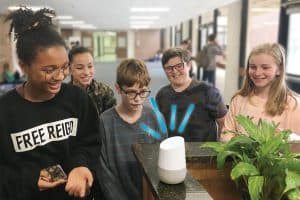 Your Library Needs to Speak to You

Getting ahead of the voice assistant hype 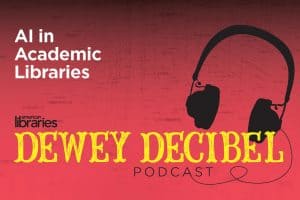