Bestselling author Laurie Halse Anderson has entered the superhero universe. Known for her influential young adult titles (such as Speak, Catalyst, and Fever 1793), Anderson’s new graphic novel, Wonder Woman: Tempest Tossed (DC Comics, June), explores the superhero’s teen years and her quest for justice after becoming separated from her family and home on the fictional island nation of Themyscira.

The novel was a collaboration among an all-female team, comprising artist Leila del Duca, colorist Kelly Fitzpatrick, and letterer Saida Temofonte. American Libraries spoke with Anderson about how the refugee crisis made her reimagine Wonder Woman’s origin story, what spurs her to fight censorship, and how the library has been her sanctuary.

We read that Wonder Woman has always been your hero. Was it a challenge writing in a universe that already exists?

Thank goodness that one of the nice things DC [Comics] said to me was to not worry about continuity issues, because there have been decades and decades of Wonder Woman stories and different reboots. 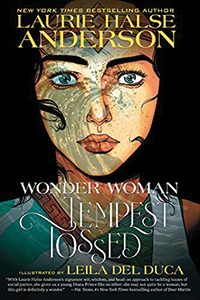 When I was thinking of ideas for the story, I kept circling back to her passion for justice. And one of the neat things about writing her at age 16—an age group near and dear to my heart—is that like everybody at 16, she’s still figuring out who she is. She’s the only teenager on the island of Themyscira because all the other Amazons were created from scratch as adults. She was very much alone.

I saw a photograph a couple of summers ago that impacted me deeply: It was taken, I think, in Greece, on the shore, when so many migrant and refugee families were desperately fleeing across the Mediterranean. The photo was of a person standing on the shore holding a child-sized life preserver. There was no child in it; it was a life preserver that floated ashore from a boat that had gone down. And I thought, “That’s the key to the story right there.” What if Wonder Woman encountered a real-life refugee situation? How would she act? And of course she would try to help and, at 16 years old, she’s going to make mistakes, like we all do. That was the seed for the story.

All those topics are completely connected and have everything to do with vulnerability and the abuse of power, and nobody is more vulnerable than children. If their family is a refugee family or a new immigrant family, there are even more challenges.

What changes or trends have you noticed in publishing during the pandemic?

My heart really goes out to debut authors right now. They really, really need the attention and the love. We’re going to get through this. In some ways, I see opportunities for our community to be strengthened. I’ve directly contacted teachers and schools, and I’ve started to put more material on my YouTube channel. Like everybody, we’re trying to stay safe, we’re trying to stay healthy and take care of our responsibility. Our responsibility is to tell stories.

Librarians and libraries are the heart of American communities, and we have to keep fighting to make sure they are supported robustly.

You’re a champion of intellectual freedom. What experiences have led you to fight censorship, and how have librarians helped in this cause?

Librarians are my superheroes. My career started in 1999 with Speak [whose protagonist is sexually assaulted] and some very brave English teachers. They put it in classrooms and in libraries, and people are still fighting to have it removed. Because some adults are so threatened by the idea of children needing to discuss things like sexual violence, they would rather have the book removed, and then we don’t have to have the conversation. Which is not only illegal if it’s being removed by a government body, but man, what a failed adult. Our children are counting on us to provide them with safe, responsible opportunities to learn and to have conversations about things they are facing day in and day out.

I would be dead if it weren’t for libraries. My father had PTSD and was an alcoholic because of his war experience, and I was raped when I was 13 and didn’t tell anybody for decades. I was a mess. I was cutting class, I was getting high, and the library was my sanctuary. The librarians knew I just needed to read. And the space and diving into books kept me alive for many paralysis years.

One of my proudest connections to libraries is that my older daughter, Stephanie, is a librarian in New York City. Her library life started when I took her for storytimes and puppet shows, and to borrow about a million books. In —that’s when I knew she had found her path.

Librarians and libraries are the heart of American communities, and we have to keep fighting to make sure they are supported robustly.

What project are you currently working on?

I’m editing an anthology for DC [Comics]; it’s a graphic novel anthology about the Wonder Women of history. We’ve got all kinds of writers and artists coming into the project. And we’re looking to write about women who embody both the inner strength of Diana Prince of the Amazon and have made their mark on the world. 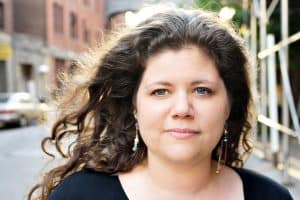 Building worlds with Spotify and specificity