5 Library Jobs on the Rise

Last year, career prospects for library workers weren’t looking so rosy. The pandemic had thrust many industries into uncertainty, and library schools, job boards, and recruiters reported a contraction of library jobs not seen since the Great Recession.

Luckily for job seekers, that trend seems to have receded. CNBC reported in late March that there were a record 5 million more job openings than available workers. That tendency bears out across the library industry.

“The number of library jobs advertised nationally since late 2021 has hit unprecedented levels,” says David Connolly, recruitment ad sales manager for the American Library Association’s (ALA) JobLIST website. He notes that the number of positions posted to JobLIST between January and March alone has been more than 20% greater than any year in the site’s 15-year history.

In this environment, job boards are seeing some unique roles and nontraditional titles—reflective of larger trends and problems libraries wish to solve—being advertised. Connolly says this is thanks to the ambiguity and attrition of the early days of the pandemic. “Many libraries took that opportunity to evaluate whether their existing positions fulfilled current needs and to redefine some of them to meet emerging needs, including new roles focused on core values,” he says.

American Libraries takes a closer look at five positions popping up in greater frequency across academic, public, school, and special libraries, and the people who do this work.

In October 2018, the United Nations released a landmark scientific report that warned the world had only 12 years to take drastic action if it hoped to avert climate catastrophe. Three months later, the ALA Council adopted sustainability as a strategic direction for the organization at the 2019 Midwinter Meeting in Seattle, signaling to libraries it was time to increase capacity in this area.

Practitioners of sustainability in libraries, however, know the problems communities are facing aren’t merely environmental.

“Sustainability, in the most basic sense, is the ability to continue doing what you’re doing,” says Casey Conlin, library sustainability coordinator at Mid-Hudson Library System (MHLS) in Poughkeepsie, New York. “[Libraries] have to be able to stay around to continue the work that they do for the people that they serve.”

Like ALA, MHLS subscribes to the triple bottom line model of sustainability, which prioritizes environmentally sound, economically feasible, and socially equitable practices. For Conlin, it’s not just about helping the 66 autonomous member libraries in his system make responsible decisions about building projects—although advising on capital improvements that can lower a library’s heating and cooling expenses, for instance, is part of the job.

In fact, sustainability is connected to a host of issues, such as racial justice, accessibility, ethical investments, and voting, Conlin says. “We’re trying to look at inclusivity from a lot of different angles.”

In his role, Conlin directs professional development that supports MHLS libraries in discovering trends, innovating services, and staying relevant for their users. For libraries just starting out with sustainability, he recommends pursuing the certification program from the Sustainable Libraries Initiative (sustainablelibrariesinitiative.org).

“We have to make sure that we’re … providing services that really are for everyone,” Conlin says.

User experience (UX) in a library setting could mean anything from having a navigable website to useful signage to good customer service.

“There are so many definitions,” says Sharesly Rodriguez, user experience librarian at San José (Calif.) State University (SJSU). She says her job is about making sure products, services, information, and spaces are usable, findable, and accessible to people with different needs. “It’s also about removing as many barriers as needed for the user to accomplish their goal,” she adds.

In her role at SJSU, Rodriguez conducts research as a basis for problem solving and creating positive experiences for students and faculty. “Needs must not be assumed,” she says. Rodriguez often relies on surveys, interviews, usability tests, and website analytics to help her understand how the library is being used both on campus and online. “It could also be as easy as using whiteboards and sticky notes to ask students how they feel,” she says.

Her duties span both the physical and digital and have led her to develop an after-hours reference chatbot for the SJSU Library website, improve the library’s intranet, and work on assessing the library’s use of space. Rodriguez also convenes a UX working group that facilitates exercises and shares design thinking methods with other staffers.

Her own introduction to the term user experience was in library school, at a time when she says the phrase hadn’t fully caught on yet. “A lot of circulation departments are now being renamed user experience [departments], and that was something that wasn’t there before.”

The concept is not only growing in libraries; Rodriguez believes UX is for anybody, anywhere. “Even if you don’t work in a library, you can always pick up a project that focuses on improving a service or a product … and volunteer to do that work.”

3) Director of equity, diversity, and inclusion

With protests in support of Black Lives Matter and social justice movements coming to a head in 2020, many libraries across the country have committed to breaking with traditional neutral stances and doing better on the front of equity, diversity, and inclusion (EDI). Oak Park (Ill.) Public Library (OPPL) has gone a step further by codifying an Antiracism Strategic Plan and hiring the library’s first director of equity and antiracism.

“Our community informs what we do,” says Stephen Jackson, who took on the role in October 2021. “What I really love about our journey is that it’s been institutionalized.”

The strategic plan focuses on dismantling institutional, internalized, interpersonal, and structural racism, and lists objectives for each category—such as evaluating the need for MLIS requirements in hiring, developing staff affinity groups, and implementing a new patron code of conduct.

Jackson, who has a master’s in clinical mental health, started with OPPL as a social services specialist at a time when the library was moving toward a community outreach model. “I’m a restorative justice practitioner. [It’s] where my heart is,” he says. “I think that the mitigation of harm is the best way to be.”

He sees a correlation between EDI work and restorative justice—an approach that emphasizes the importance of every voice being heard. In his first few months on the job, he has focused on building relationships and onboarding new staff members.

Jackson acknowledges OPPL can do this work, in part, because its board of trustees is diverse, engaged, and supportive. For those libraries experiencing opposition to antiracism work, he suggests asking questions of community members.

“When I get pushback from people about my title or about the work we’re doing,” he says, “I get really curious about what in particular about being antiracist [people] have an issue with.”

“Sometimes students are trying to decide if they’re going to buy the textbook or buy groceries,” says Amy Lagers, reference and instruction librarian at Tulsa (Okla.) Community College (TCC). “That’s reality for a lot of our students.”

Lagers, who leads the open educational resources (OER) team across TCC’s four main campuses, says the cost savings these free materials present is a primary reason her school has engaged in work to increase OER adoption. TCC is an urban commuter college with a large percentage of nontraditional students for whom OERs represent huge relief, she points out.

“Our role is to locate, evaluate, and curate OER resources and make sure that [faculty are] aware of resources that match course objectives and provide low- or no-cost textbook alternatives to students,” Lagers says.

Sometimes faculty members push back on switching to OERs because they don’t have the “bells and whistles”—such as online platforms and test banks—that the major textbooks might have, Lagers says. TCC tries to support this transition by getting librarians, instructors, subject area experts, and course designers to work together on developing classes.

“Be patient, because it’s something that definitely takes a mind shift,” she advises those who might want to do this work at their institutions.

OERs aren’t confined to higher education. In fact, the American Association of School Libraries published its own OER toolkit for K–12 librarians in 2019, and open materials became a lifeline for many schools teaching virtual classes in the early days of the pandemic.

Lagers recommends that anybody interested in OERs take the Creative Commons Certificate program to orient themselves with the many types of open licensing.

Increasingly, data visualization services are being added to libraries’ offerings—especially in higher education. The authors of “Supporting Data Visualization Services in Academic Libraries” (The Journal of Interactive Technology and Pedagogy, vol. 18, Dec. 10, 2020) argue this is because the academic library is seen as a natural hub for services that can be used by many departments and fields. The authors also stress that people with expertise in data visualization are needed to make these services successful.

Jo Klein, GIS and data visualization librarian and assistant professor at University of North Carolina at Greensboro, is one of those people. A typical day for Klein might include assisting students and faculty with data visualization software, conducting consultations with researchers, hosting workshops on free tools, and doing their own research.

For Klein, who has a natural sciences background and experience creating charts and graphs for the US Environmental Protection Agency, data visualization librarianship is the “perfect intersection” of their interests. The work requires proficiency with data science tools and programming languages, such as Python, R, and Tableau. “Part of where it’s a little bit difficult is finding out which [resource] will work for you and your specific background,” they say.

Those looking to develop data visualization skills should take a free online course from the Research Data Management Library Academy or try the step-by-step tool Datawrapper, Klein advises. They also recommend being familiar with all that Microsoft Excel or Google Sheets can do.

For their part, Klein would like to see data literacy education in places outside the university: “Having opportunity for instruction or learning for folks who are patrons of public libraries would be really cool.” 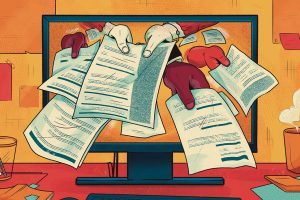 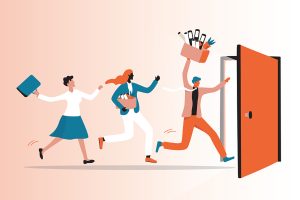 The pandemic is exacerbating attrition among library workers