By the Numbers: Audiobook Appreciation Month

1975
Year that the company Books on Tape was founded by Duvall Hecht, an Olympic gold medalist in rowing and a former Marine Corps pilot. Hecht was a pioneer in harnessing the then-new technology of cassette tapes to create audiobooks, later selling his business to Penguin Random House.

1,300+
Number of audiobooks to which actor George Guidall has lent his voice. Named the “heavyweight champion” of narration by The Guardian, he has read such classics as Crime and Punishment, Frankenstein, and Don Quixote.

4
Average hours per day people spend listening to audio, including one hour per day dedicated to spoken word audio, according to the Spoken Word Audio Report from 2019.

57%
Percentage of people who listen to audiobooks who say that they help them finish more books. 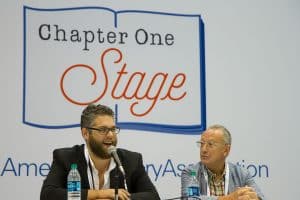 The making of an Odyssey Award Winner

All Ears This Summer