Before she became a librarian and library school educator, Joan Beaudoin studied

art history in Philadelphia. She was inspired by the city’s thousands of murals and the work of organizations like Mural Arts Philadelphia to bring attention to public art. When she moved to Detroit more than a decade ago and began teaching at Wayne State University (WSU), Beaudoin envisioned an idea for a student project to document the eclectic public art scene—a project to promote positive narratives of self-expression in a city that has seen its share of economic adversity and racial inequality. During the fall 2021 semester, she worked with WSU library school student Cameron Socha to catalog and create an interactive online map of more than 100 murals in Detroit’s Eastern Market neighborhood.

Detroit’s murals are incredible cultural resources that speak to the vibrant artistic spirit of the city and its people. When I was first driving around the city as a newcomer, I’d see murals and public art installations and look for information about them online. Some websites and apps included notes about the murals, but they often lacked key information like artist names and street addresses. I would sometimes try to revisit a mural online later, only to find what little information had been available no longer existed. This fragmented and inconsistent coverage of murals stood out to me, and I felt like my community of students at WSU’s School of Information Sciences should be leading efforts to document these artworks through photography and cataloging.

I teach a digital libraries class in which students are asked to create their own collections consisting of 20–25 personal items. It is often the students’ first time creating a collection, so I work closely with them, teaching the process of digitally capturing items and cataloging them using Dublin Core, a metadata schema used to describe various kinds of physical and digital resources. Although it is labor intensive, it’s a highly rewarding project. I enjoy connecting personally with each student to help them understand the steps involved.

I’d had the idea of cataloging and mapping Detroit’s murals for some time, but I knew I needed the assistance of the right person to get the project off the ground. I met Cameron Socha when he was a student in my digital libraries and metadata classes, where I noticed his knack for cataloging; for a class project, he had produced richly descriptive records for a collection of beer steins using Dublin Core and several controlled vocabularies. As his academic advisor, I suggested the project as an individual study course—a way to showcase what he had learned while working toward his MLIS.

The sheer volume of Detroit’s murals and other works of public art meant we had to narrow our focus to one area of the city. I selected a five-by-five-block area of the city known as Eastern Market, home to a sprawling outdoor market and more than 100 murals. These murals are diverse in their depictions: Some highlight certain market vendors’ wares, while others promote messages of social inclusion and belonging or relate to elements of Detroit’s history, such as the automotive industry and Motown music.

Together we began recording murals and determined how the descriptions would fit within the Dublin Core schema. Then Cameron began photographing, researching, and cataloging these murals within Omeka, an open source publishing platform for sharing digital collections and online exhibits. This research typically involved contacting artists and tracking down their social media handles. We have since created an interactive map that helps users discover local artwork.

Although Cameron is set to graduate this year, he plans to continue contributing to the collection and has created tutorials to guide students in how to use the mapping and exhibit features in Omeka. In this way, he is creating a foundation for other students to continue this work. Owing to the wealth of public art in Detroit, plans are underway to have future MLIS students and a university-supported intern add to the map, expanding it to other neighborhoods, including the Detroit Riverwalk and Southwest Detroit, an area where many Mexican American families live.

There is a lot of interest nationally and internationally in Detroit’s public art scene, and it’s essential to capture the richness of these contemporary works while also recognizing the talent of the artists. Neighborhoods that boast beautiful works of art can boost pride and change people’s perspectives on a place. Anything we can do to showcase how resilient and inventive our city is—especially as it recovers from bankruptcy and other challenges of the last decade—is a good thing.

Creativity is part of the fabric of Detroit, and historical narratives are woven into the imagery we see on the streets and in neighborhoods. I look forward to working with other students on this project in the future and seeing the collection grow to include other works of public art, including sculptures and art installations. 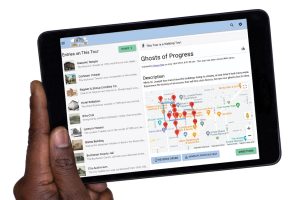 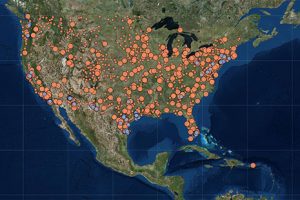 The Immigration Crisis Arrives at the Library