Critical media literacy needs to be taught, not left to chance

Language in the media—whether through visuals, audio, or traditional text—has the power to influence our beliefs about people, groups, and even how we see ourselves. When it comes to media, white men have historically and predominantly been the creators of the language that we have consumed for many years. This has created a large gap between those who create and those who are visually represented in mass media.

As a result, media representations have contributed to negative biases about certain cultural groups and have reinforced harmful stereotypes of marginalized populations that limit opportunities. Moreover, these representations have generated monolithic narratives for how groups and cultures are represented, while exalting the specific identities of the creators of media.

Representation is the use of language and images to create meanings about people, places, and things. It can be either reflective or intentional. Reflective representation emulates preexisting meanings; it reflects meanings already understood.

For instance, if I were asked to draw a picture of the sun, I would probably draw a circular object on the page and color it yellow, orange, or red. It would be quite peculiar if I drew a black or green square to represent the sun. This is because there is a preexisting convention as to how we depict the sun—in a shape and colors that symbolize warmth and brightness.

But what if you had a negative experience with the sun, such as a bad sunburn? You might want to draw an angry-looking sun with downward-slanted eyebrows, flared nostrils, and fire coming out of its mouth. This is an example of intentional representation.

The illusion of inclusion

When the global pandemic forced us all to isolate ourselves in our homes, Saturdays became a time for me to enjoy my favorite TV shows and movies with my 11-year-old daughter after a long school and work week. One Saturday, after watching several reruns of The Thundermans, a Nickelodeon show about a superhero family that we both thoroughly enjoy, I observed a trend in all the episodes we had seen: Everyone, in every scene, in every episode, was white.

While my daughter tends to sigh heavily with dismay or respond with “Can we just watch the show?” when I begin to critique any media, I saw this as an opportunity to discuss how the media world was connected to our physical world and the reality of the time. I wanted her to understand that our invisibility in some of our favorite TV shows as Black people, and more specifically as Black girls, should never be normalized. Thus, I began to ask her a few questions.

First, I asked, “Are there any characters in this TV show who look like you or our family?” She took some time to respond. “No, not really,” she replied. “But there are a few episodes with Super President Kick-Butt, who is a Black woman—although she is barely on the show.” We then began to discuss how the show was not an accurate representation of the world we live in and did not reflect how we see people every day who don’t look the same as we do.

As I thought about my experiences growing up watching TV shows with all-white casts, I realized I had validated my “wokeness” of being Black in this world by also watching shows with all-Black casts such as A Different World and The Fresh Prince of Bel-Air. So, while I enjoyed shows that could be perceived as anti-Black, in my mind my “Black card” was in good standing in my community, since I was also tuned into Black television shows and movies.

But just as black-and-white TV gave way to color in the late 1960s, and how we long thought the civil rights movement drove racism underground in the United States during that same time period, a critical lens reveals there has been only the illusion of inclusion, both on the screen and in real life. And this is an illusion that has crippled progress in our society and enabled us to avoid deeper conversations about the 2020 murder of George Floyd, the protests that followed, and the Black Lives Matter murals that were painted on city streets.

Nowadays, young people consume media on average eight hours a day, and Black youth report even more hours of engagement. Black youth are reading messages every day that depict destructive narratives about their existence and are witnessing the killing of people who look just like them. The invisibility and misrepresentation of marginalized communities in the media coincide with the absence of diverse representation in mandated school curricula, and this sends a clear message to the children of these communities that they do not matter.

Mass media is where we get our information and entertainment. But it’s also a commodity. Media is a big-business industry, and whoever owns the films produced, the TV shows we watch, and the personalities we see on our local news station has control over the representation and imagery presented there. Since the mainstream media is controlled by the elite, equitable coverage on issues that impact our society is at risk, and it is a challenge for the voices of communities that lack wealth or political influence to be heard. For this reason, it is important for educators to discuss media ownership with students.

There is a need for more diversity in corporate ownership and among the creatives behind the cameras, in the writers’ room, and sitting in the director’s chair. While media institutions are slow to change, youth can push for positive representation and create their own imagery through critical media literacy. The skills gained through critical media literacy support identity development and media creation, and may lead to media careers that can change the industry from within.

As a Black woman, my experiences may be like those of other Black women, but they are also substantially different because of the other identities I possess. Thus, the need to dismantle what author Chimamanda Ngozi Adichie has called the “single story” is vital as we redefine representation through new media in our society.

Marginalized communities have used new media and social media to redefine their identities through counternarratives that resist the hegemonic ideologies that oppress their existence. Hashtags such as #BlackGirlMagic and #BlackTwitter have been created to engage in counter-representation in the media. Additionally, #BlackLivesMatter and #SayHerName exalt the voices and stories of marginalized individuals who have experienced police brutality and whose deaths have not been covered in the mass media. Social media gives marginalized populations and youth in general the power to tell their own stories—a power once granted only to professional journalists and media companies.

It is imperative for media literacy educators to help students understand how representations are constructed in the media and how media messaging influences our beliefs about ourselves and others. Here are some exercises I have used to get the conversation started.

To warm up students with a critical thinking exercise, ask them what comes to mind when they hear the word representation. You may hear a wide range of answers or simply “I have no idea.” Either response is fine. Explain that representation is created by an individual and communicated to others about an experience or impression of a person, place, or object.

Ask students to name their favorite celebrity (YouTuber, artist, etc.) and describe them in three words. Then ask them to raise their hand if they have ever met that celebrity in real life. More than likely, most students will not raise their hands. Create an opportunity to discuss briefly with students how they were able to describe their favorite celebrity if they have never met them in person.

Help students realize that the representation of their favorite celebrity was created in their mind from what they saw in the media and that if they sat down to get to know them personally, it might be a completely different experience. Therefore, media can make us think we know someone we’ve never met before.

Introduce the idea of content worlds. These are constructed spaces or places that exist in the movies we love, the TV shows that become a part of our lives, and the books that capture our imaginations. Some examples of content worlds include Wakanda from the movie Black Panther and the island from the classic 1970s television show Gilligan’s Island.

An example of a content world I tend to share with students is one that inspired me to pursue higher education as a first-generation college student. That content world was a place called Hillman College, from the 1990s sitcom A Different World. Hillman was a constructed place where Black young adults could visibly be themselves. It was a place where people who looked like me and were also bookworms, just as I was, thrived socially.

As an adolescent, I wanted to go to this world and eat at The Pit with Mr. Gaines or hang out in the dormitory with characters Kim Reese and Freddie Brooks. After I introduce Hillman College to students, I ask them to think about content worlds that exist in their own favorite television show or movie and answer some questions:

Ultimately, thinking about such questions can lead students to reflect on how their identities are connected to, or disconnected from, the characters in their favorite content worlds. As media literacy educators, our goal is to educate them on how to use the media as a tool for positive influence, and to be cognizant of how the representations they construct can either help or harm our world.

JIMMEKA ANDERSON recently received her doctorate in urban education from University of North Carolina at Charlotte. She is also founder of I AM not the MEdia, a nonprofit that empowers youth through media literacy curricula and community, and project manager for the Cyber Citizenship Initiative with the National Association for Media Literacy Education. Her book with coauthor Kelly Czarnecki, Power Lines: Connecting with Teens in Urban Communities through Media Literacy, was published by ALA Editions earlier this year. 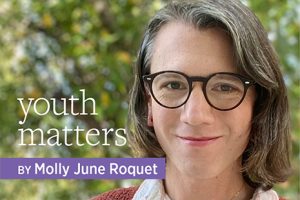