The Wind at Our Backs

I just returned from New York City as part of an ALA delegation that discussed libraries and ebooks with publishers and related organizations. In the past two years, ALA has made enough of these trips (8) so that I now know the city by publishing industry landmarks: Oh, we need to go to the Association of American Publishers (not Union Square) or to Random House (not Columbus Circle). I hope this is a good thing!

This trip was unique because we arrived with the knowledge that all of the largest publishers now deal with libraries in some way—our first such trip. While the progress is gratifying, there remains a long road ahead. Nevertheless, we came with a little breeze at our backs, and we felt the wind grow a bit stronger during our visit.

ALA President Barbara Stripling was the leader of the delegation that visited New York City on September 30–October 1. Other delegation members were Maureen Sullivan, immediate past-president; Keith Michael Fiels, executive director; and Robert Wolven, co-chair of ALA’s Digital Content and Libraries Working Group (DCWG). We met with executives at Penguin Random House and Simon & Schuster from the library, education, and academic business sectors, as well as general management. We also met with leaders from the Association of American Publishers and the American Booksellers Association, as well as the editorial director of Digital Book World.

On the eve of the ALA delegation meetings, Keith Fiels participated in the annual meeting of the Book Industry Study Group (BISG) and in his first BISG Board of Directors meeting as a newly appointed board member. We began our delegation meetings with Jeremy Greenfield of Digital Book World, and engaged in a wide-ranging discussion of ebooks, the future of libraries, and the publishing industry, which was reported October 3 in Forbes. Jason Kucsma, executive director of the Metropolitan New York Library Council (METRO) graciously hosted this meeting (Kucsma also is a member of ALA’s DCWG).

On reflection, the most striking change was the temperature of the rooms—and I don’t mean Fahrenheit (though we did have glorious early fall days in the big city). On our previous trips, we noticed that publishing representatives had some decided ambivalence, if not occasional frostiness, regarding libraries as we sought basic access at reasonable prices; some publishers were not ready to “go there” (or even nearby). Moreover, there was a considerable information vacuum: We had a modest (at best) understanding of ebook publishing, and our publishing colleagues often had only a modest understanding of how libraries work, especially in the digital environment. 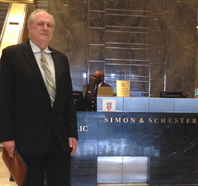 Increasingly on the last few trips, and especially on this most recent one, there was a definite sense of cooperative spirit. For example, the Simon & Schuster discussion did not revolve around whether the publishing house’s initial pilot with New York City libraries would be expanded, but on its progress in opening with other library systems and how could it best be done for all concerned. And at Penguin Random House, the focus was on why particular pricing levels and models are (or are not) acceptable. There were no promises, but the dialogue was constructive and we all felt that we are moving on an “upward trajectory,” as Barbara Stripling often characterizes our journey. 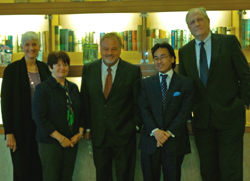 The possibilities for libraries to facilitate ebook purchasing by readers came up in several meetings. Clearly, many people in the publishing ecosystem see libraries, with their community-based physical presence around the country, as attractive outlets. At the same time, libraries and local bookstores have a well-established, beneficial relationship that we want to build on. A current and likely long-term evolving issue will be to discern which sales-oriented activities best serve our users and libraries and which ones are not best placed in a library context.

We heard the question, “Have libraries and ALA won?” Of course, the facile answer is no—this is not a war or a game. The more substantive answer is that the largest publishers all deal with libraries in some way, which has been good progress. Indeed, thinking back to the bleak winter of 2012, maybe today’s situation is even a little better than good. On the other hand, two of the largest publishers remain in library pilots, pricing remains challenging, and there are important concerns about preservation, privacy, school libraries, and accommodations for people with disabilities, among other issues.

“Upward trajectory” indeed, but we have much more room to grow, and the ebook and larger digital environments themselves are still evolving. We are hopeful and continue to move ahead. For further details, please join us at the ALA Virtual Town Hall Meeting on October 23, at noon Eastern time. ALA President Barbara Stripling will lead the town hall. Register here.

ALAN S. INOUYE is director of ALA’s Office for Information Technology Policy and program manager of the ALA Digital Content Initiative.