The Standards at Work

The new American Association of School Librarians (AASL) Standards were the focus of concurrent sessions at the AASL 2019 National Conference, held November 14–16 in Louisville, Kentucky. Each program demonstrated how Standards foundations—inquire, include, collaborate, curate, explore, engage—are being applied by school librarians.

At “Do the Bot: Librarians Using Robots to Impact Learning,” Archon Auzenne, Lee Glover, and Gloria Miller, librarians from Clear Creek Independent School District in League City, Texas, demonstrated how different types of robots can be used to teach students programming and coding. After learning how Bee Bot, Edison, and Sphero robots work, attendees spent the second half of the session putting their new knowledge to work at stations set up throughout the room.

Librarians curious about podcasting received a primer at “Podcasting for People in a Hurry.” Presenter Chris Young, director of libraries at Metairie (La.) Park Country Day School, played clips from podcasts created at his school and explained how podcasts can be effective tools for promoting projects and programs; helping students develop media production ethics; and instilling listening habits in a visual media age. Young shared a variety of easy-to-use, low- and no-cost software and hosting options that librarians on a budget can use to get started, such as the free editing software Ocenaudio, which attendees spent time exploring during the session.

Barbara Pearson, journalist and outreach coordinator at the Newseum in Washington, D.C., detailed the history and power of manipulative messaging in “Detecting Propaganda, Defeating Emotional Manipulation.” After clearly defining what constitutes propaganda, Pearson showed how it plays off our fears, influences our emotions and decisions, and promotes division, as well as how to combat it. Among the methods she recommends is getting news from five media outlets—two that you agree with, two that hold opposing views from your own, and one that covers a specific perspective or topic of interest to you.

In “Include Everyone: Exploring Social Justice in the Library,” Erika Long, secondary librarian at Metro Nashville (Tenn.) Public Schools, and Susan Polos, middle school librarian at Greenwich (Conn.) Country Day School, explained how their students became involved in social justice advocacy and how librarians can help encourage activism at their schools. They recommended letting students approach advocacy and causes they’re passionate about on their own terms. “The key is letting them learn to use their own voice,” Long said.

Lit of all kinds

Arguing for graphic novels as acceptable literature and integrating them into the curriculum was the focus of “‘That’s Not Real Reading’: Making the Case for Graphic Novel Inclusion in Every Classroom.” Amanda Melilli, curriculum materials librarian at University of Nevada, Las Vegas; Kate Covintree, librarian at the Wheeler School in Providence, Rhode Island; and Alicia Abdul, librarian at Albany (N.Y.) High School, presented a primer on the visual language of comics and how the medium can be used by students at all reading levels. The trio said graphic novels are particularly useful for reaching kids who’ve yet to embrace reading, ESL students, students with disabilities, and marginalized students. The presenters also challenged attendees to read 25 graphic novels for possible inclusion in their library’s collections and to become future experts on the medium. “We need more library professionals creating [graphic novel reader’s advisory] book lists,” Melilli said.

YA authors Janelle Diller (the Never Enough series), Kathleen Glascow (Girl in Pieces), and Alan Gratz (Allies, Refuge, Grenade) discussed their work and how they address topics such as sexual assault, self-harm, gun violence, suicide, and prejudice at “Tough Topics and Teens: Using YA Lit to Open Difficult Conversations with Learners.” The authors said they drew on personal experiences to write about the subjects honestly and in ways that young readers can relate to. Glascow, who engaged in cutting in her youth like the main character in Girl in Pieces, said she hopes her book can be a resource for kids who feel alone and isolated by their actions. Getting their books into the hands of kids in need can be a challenge, they said, because some adults bristle at the subject matter. “You have to make books that might make you uncomfortable still available for kids because they may need it,” Glascow said. “By denying access, you’re invalidating that child’s experience.” 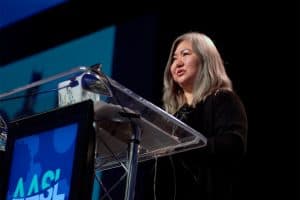 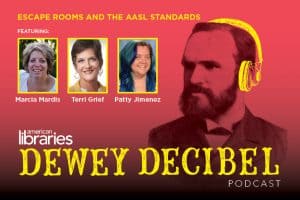