Challenges and frustrations of information access in the Palestinian territories

The directors of two university libraries in the West Bank­­—located within Palestinian territory between the states of Israel and Jordan—were the speakers at a Sunday morning program hosted by the ALA Social Responsibilities Round Table and Libraries and Archivists with Palestine.

Randa Kamal, director of the library at Al-Quds University in Jerusalem and president of the Palestinian Library and Information Association (PLIA), said one of the biggest challenges for her library is acquiring research materials. Books or journals that “discuss Palestinian culture or the Israeli-Arab conflict are prohibited” by the Israeli occupation forces and are subject to confiscation. Advanced forms of information technology are “also prohibited for security reasons,” she said, which leads to limitations on access to e-resources and websites.

PLIA, founded in Nablus in 1960, was banned after the Six-Day War of 1967, Kamal said, and was restarted only in the 1990s. “It offers some seminars, workshops, and occasional meetings,” she said, but it is limited in its ability to train professional librarians. “Librarians with MLS degrees are uncommon due to the political unrest in the area, financial limitations, and the lack of standards for professional employment,” Kamal added. “The profession of librarianship is neither recognized nor well-understood in the region.”

Diana Sayej-Naser, director of the library at Birzeit University near Ramallah and coordinator of the Palestinian Library and Information Consortium (PALICO), said that her organization, which now includes 18 institutional members, is focusing on establishing academic libraries as educational centers and developing the professional status of librarians. “Of the 82 professional librarians we do have, 80% are close to mandatory retirement at the age of 65,” she said. “There are no library schools available to us, no training courses, and there is a language barrier. Most electronic resources are in English, and there are few e-journals and ebooks in Arabic. Budget cuts are a major obstacle in sending our staff abroad for training. There are no interlibrary loan programs because there are restrictions on the transport of books, making them liable to confiscation.”

Sayej-Naser added that restrictions on travel through the Palestinian territories make it difficult for students to get to class and library staff to get to work. “As of April 2015, there are 96 checkpoints and getting to the next town could involve going through as many as three, making it a journey of several hours,” she said. “The checkpoint at Qalandiya [the main portal between the northern West Bank and Jerusalem] is one of the worst, with bars on either side of the passageway and on the ceiling, making it extremely humiliating to go through. The psychological effect of these barriers is overwhelming.”

What do the Palestinian libraries need? Sayej-Nasur was specific: “We need freely available e-resources, training in librarianship, foreign librarians to visit Palestine for work and training, scholarships to go to international conferences, funding for local digitization projects, partnerships with library organizations, and new books donated by publishers. User services librarians are needed the most.”

Kamal added a few more hopes for the future. “We must strengthen free access to information of all types throughout the world,” she said. “Physical barriers and checkpoints and other travel restrictions must be removed, fees superimposed by Israel on books acquired in Palestine should be eradicated, censorship must be lifted with no restrictions on thought, and books and archives that were confiscated should be returned to the individuals and institutions that owned them originally.”

“Libraries are like hospitals,” Kamal summed up. “Just as hospitals treat patients with good medicine, libraries need the best information to serve their communities.”

Watch the interview with the Palestinian librarians on the ALA YouTube channel: 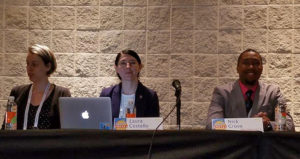 Using the concepts of play to teach users about information literacy