Adi Redzic on What We Owe Each Other

Adi Redzic, cofounder and executive director of the financial-literacy organization iOme [I owe me],  provided an engaging example of the power of storytelling at “Financial Literacy: Why Students Need Librarians to Get Involved” on Saturday at the 2014 ALA Midwinter Meeting in Philadelphia,. Rather than relying heavily on statistics or discussions about financial policies to encourage library staffers to play a role in helping Millennials prepare for a secure financial future, he told his own story in a way that made audience members a part of that story—and one that is much bigger than any one person.

Setting the context with a video (1:00), Redzic recalled a period 11 years earlier in his life—when he had been 17. He said his dream had been to leave his family home in Montenegro, where the average monthly salary was $50, and travel across the United States. He arrived in Milwaukee with little more than $376 and a dream of a better future.

“Along the way, I experienced a few roadblocks,” he said, laughing ruefully along with the rest of us. His reality was that he lacked a consistent source of income, had inadequate support, was limited by immigration regulations that made it impossible for him to work, lacked knowledge and information essential to success, and was homesick.

“A lot” happened in his journey to overcome those challenges, Redzic recalled. He graduated from high school in the US, then continued his formal education by earning a B.A. (political science, international studies, and business) and a master’s degree (political science). He proudly acknowledged his good fortune in managing to graduate from college burdened with no more than a $45 debt he was carrying from an unpaid campus parking ticket—as opposed to the tens of thousands of dollars many Millennials amass as they gain the education essential to their success in the contemporary workplace.

More important, he said, he acquired the visceral sense that many people feel as if the world owes them something. His response was to focus on what each of us owes ourselves—and from that philosophy came the individual iOme and generational weOourselves [we owe ourselves] challenges described on the iOme website.

The organization, with Redzic as cofounder and executive director, has straightforward mission and vision statements: to challenge college students “to change the world by investing now in their own lifelong financial security” and “to be recognized as a hub of conversation, information, and insight on the long-term financial security of young people.”

Equally important, iOme is benefiting from a collaboration with ALA’s Association of College and Research Libraries through ACRL President Trevor Dawes’s presidential initiative on financial literacy.

There clearly is a role for librarians in iOme, Redzic told us: Librarians are networked, resourceful, rigorous, collaborative, engaging, friendly, and accessible—all of which provides a great vantage point for supporting students in their efforts to achieve financial literacy.

The need is strong, he explained. Many Millennials are concerned about the financial situation facing the US; don’t trust politicians to solve the problems; rely on parents or someone else to help pay their bills; and are not saving for retirement because they can’t afford to do so.

Library staffers can support Millennials’ iOme efforts in many ways, he said: Create financial literacy events, provide a venue for financial literacy speakers, and develop creative campaigns to bring students together; survey students to document their needs; and help them start a movement “because this matters.”

Reflecting on Redzic’s presentation more than 24 hours after attending it, I’m struck by how consistent it is with so much of what I’ve seen at the 2014 ALA Midwinter Meeting and in the work of colleagues in libraries across the country. It’s a wonderful complement to calls for library-community partnerships and collaborations through programs including “The Promise of Libraries.”). It’s entirely consistent with the increasingly visible role libraries play as learning centers (). And it continues library staffers’ commitment to literacy in its ever-evolving permutations. If we join in the iOme challenge, we continue our overall commitment to being substantially contributing partners within the communities in which we work, live, and play.

PAUL SIGNORELLI, of Paul Signorelli & Associates, is a writer, trainer, social media strategist, and consultant. Email him at paul[at]paulsignorelli.com. 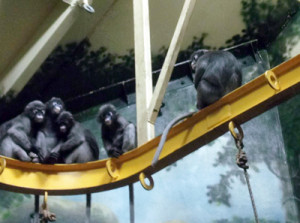 A Private Look at Primates 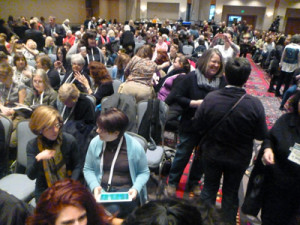 The Excitement of the Youth Media Awards