The June 12 episode of American Libraries Live tackled the million-dollar question: Why do we need librarians if we have Google? Panelists for “Going Beyond Google” were: Joanna Burkhardt, professor and head librarian at the University of Rhode Island (URI) Branch Libraries in Providence and Narragansett; Nikki Krysak, head of instructional services at Norwich (Vt.) University; John McCullough, product manager for discovery at OCLC; and Beth McDonough, research and instruction librarian at Western Carolina University in Cullowhee. The panelists addressed the myth that Google—or the internet or other search engines—has all the right answers, but also discussed the ways in which Google provides opportunity for librarians and can enhance library services.

Moderator Dan Freeman asked the panelists what their elevator speech response is to this "million dollar" question.

“If you want to drink from a fire hose, Google is just fine,” said Burkhardt. “But if you want more limited and accurate information, you need a better way to do that. There’s so much information and it’s piled up in a huge mountain of stuff, so in order to find exactly what you’re looking for, I think libraries are a better way to go.”

McDonough added that whenever she gets that question she knows that whoever is asking it hasn’t been to a library recently. She said she would challenge them to actually visit a library and explore. “We’re so much more than just a flow of information. We’re an informal learning space that’s user-driven and helps give information context and a human touch,” she said.

Krysak made the point that while the world is more connected, many people are still unconnected and libraries help bridge the digital divide.

McCullough declared the question to be a false dichotomy in that libraries are the endpoint of a research question, even if that search starts on Google. “Google can’t provide the same fulfillment as a library,” he said.

“I don’t think Google is a death knell for libraries,” Krysak said. “I think that, in fact, we (libraries and Google) are supplementing what it is that each of us can provide. With the amount of information out there, and with the variety of opinions being filtered to extreme viewpoints, I think librarians—and the library itself—are essential because they provide a context.”

McCullough reiterated that such a dichotomy is false, but that there is a danger that the somewhat more traditional roles of the library may be abdicated to other online presences. “In some ways, the finding role or the recommendation role of libraries has been ceded to Amazon or Goodreads. But there’s no reason that a user that starts out at Google can’t end up at the library, and that’s the big opportunity for the future.”

Agreeing with this point, McDonough said that Google as a tool has replaced some functions of libraries, like answering questions where there’s a single right answer, such as an address. “But most information problems that people face are much more complex than that. That’s where libraries are so valuable.”

Burkhardt made the point that Google was, in fact, providing librarians with a lot of job security. “People use the single search box, type in what they think is going to work, and take what they can get,” she said. “I think we can act as teachers to help them get better results by showing them how to do a better search to get after what they’re looking for.”

McCullough argued that Google can be leveraged the way other starting points on the web can, like with OCLC’s syndication program that includes a “Find in the Library” link which takes the user back to the cooperative’s collection and holdings at different libraries.

“The next frontier is working with search engines specifically. The dream would be that if a user types in a title and they are near your campus or a public library, your local collection comes up along with Amazon, Goodreads, and other aggregates,” he said. “It’d be one way to use Google to get more usage out of the library.”

McDonough’s perspective from an instruction standpoint is that Google is invaluable because students know how to use it. “It can be a foundation to teach them more sophisticated tools and how to think about information,” she said.

When comparing Google to Wikipedia, Krysak and Burkhardt spoke about the existence of many good starting points for information, but stressed that neither site can be trusted as the sole source of information. McCullough, on the other hand, sees Wikipedia as more of a danger to libraries because many students see it as an endpoint, not as a starting point.

“We have to know how search engines function in order to incorporate that into our website design. We need to know our content and audience and design sites for our users,” Krysak said. “It’s easy to forget that it’s ultimately about making our content visible to Google users.”

McCullough referenced the potential of Linked Data and the importance of metadata to visibility.

When asked what libraries do that is better than search engines, panelists responded that the human element was a key component.

“Libraries offer human support. We’re so used to the idea that the only way to get information is to type a few words into a search box, but that isn’t true. There are so many aspects, one of the first being thinking out your information need, and that’s the human side of librarianship,” McDonough said.

“People can ask us a question. You can’t ask Google why a search isn’t working,” Burkhardt added. “We can also guide them to opposing, or more reliable, sources.”

With so much information available on the web, librarians are essential in teaching users the difference between authorship and being an authority on a topic. Freeman said that the democratization of information on Google sounds like a good thing, but there may be pitfalls. McCullough agreed, arguing that while Google “follows the wisdom of its users” when creating search results, “libraries actually have to point to all the things that are the bedrock of good research.”

Freeman asked the question currently plaguing library professionals: “We know we’re necessary and vital. How do we get the message out?”

Krysak stressed the importance of community building, both from outside the profession and within, using public libraries as inspiration. McDonough agreed, and added that another element academic libraries may borrow from their public counterparts is programming. When a participant in the chat space asked if there was any "real evidence" of libraries being better than Google, McDonough said there is recent research connecting the existence of academic libraries to student retention, but there was a lot more to be done.

“We’re just starting as a profession to go down the road of quantifying or measuring the impact of libraries,” she said. Krysak said that librarians spend a great deal of time doing "turf-defense," but referenced studies like Project Information Literacy, a large-scale, national project about early adults and their research habits, conducted in partnership with the University of Washington’s iSchool.

While hard statistics may be hard to come by, the panelists agreed that they all witness the impact libraries have on people’s lives, especially for those who are still not "connected."

“As budgets get cut, people on the wrong side of the digital divide have more need for library services,” Burkhardt said.

On a final note, McCullough stressed that librarians should embrace Google as a tool because it enhances their work. “If we use these tools and are in these places, there’s no replacement for the value of the library or librarian,” he said. 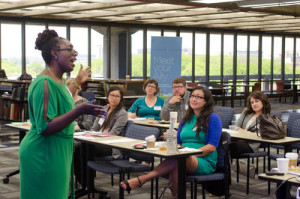 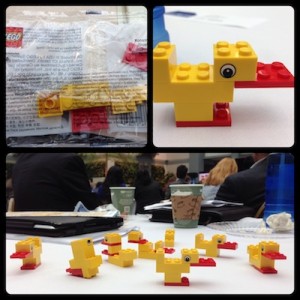