The Black Caucus of the American Library Association and the ALA Social Responsibilities Round Table held the 15th annual holiday observance and sunrise celebration for Dr. Martin Luther King Jr. on Monday morning at the ALA Midwinter Meeting in Chicago.

Dr. Cornel West, professor of philosophy and Christian practice at Union Theological Seminary in New York City, delivered an inspired and rousing keynote speech to hundreds of conference attendees who managed to arrive by 6:30 a.m. West acknowledged ALA President Courtney Young, “the captain of this ship,” and noted that her uncle Gerald Horne, chair of history and African-American studies at the University of Houston, is a prolific and provocative historian whose books are well worth a read.

West began by saying, “There is such a sweet spirit in this place. There is something about libraries” that in many ways have enriched him intellectually and empowered him spiritually. “Even growing up on the chocolate side of town [Sacramento],” he said, “the bookmobile was there for us. Libraries and librarians really do matter.”

Librarians “are the caretakers of what the Greeks call paideia — deep education, not deep schooling,” with a commitment for equal access to all, West said. He quoted educator Diane Ravitch: “Rich kids get taught and poor kids get tested.”

“Martin Luther King Jr. was a special man,” West said. “He had something that the Greeks call areté, excellence.” He showed that in 1960 in a paddy wagon in Reidsville, Georgia, spending four-and-a-half hours in the dark with a German shepherd dog constantly barking. King had said, “This is the cross that we must bear for the freedom of our people.”

“Martin Luther King knew that justice is what love looks like in public, just as tenderness is what love looks like in private,” West said. “Everybody loves him now that the worms have his body, but when he was alive, 72 percent of whites disapproved of him and 55 percent of blacks disapproved of him,” largely because he was seen as antiwar, a spokesman for Radio Hanoi, unpatriotic, and an apologist for the socialists W. E. B. Du Bois and Paul Robeson. His trusted colleague Andrew Young once told King, “You have set the black movement back for years.” King calmly replied, “What you say might get you money from corporations, but it won’t get you a foothold in the Kingdom of Truth.”

West called Du Bois the greatest intellect of the 20th century and quoted his 1957 novel The Ordeal of Mansart: “How shall Integrity face Oppression? What shall Honesty do in the face of Deception, Decency in the face of Insult. … What shall Virtue do to meet Brute Force?” West said that “we live in a world in which cupidity has displaced integrity.” Big money, big banks, big corporations, and “cash rules everything, but it doesn’t have to rule me.”

Returning to libraries, West said that “in the library you encounter what the blues is all about. Blues is about catastrophe lyrically expressed. ‘Nobody loves me but my mama and she might be lying too.’ That’s catastrophe.” What will you do about catastrophe? he asked. “Let us forever remember Martin Luther King Jr. and build on the challenges he presents to us with a deep sense of humility and determination.”

On the podium with West was Satia Orange, the former director of ALA’s Office for Literacy and Outreach Services, who began the tradition of the Martin Luther King observance in 2000 and who gave a call for action to all librarians: “Make libraries more relevant for more people,” she said. “Heed a call to leadership. More than ever, the people back home need us.” 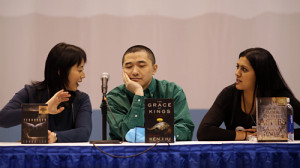 Authors relish their genre, while debating its relationship to fantasy as a whole 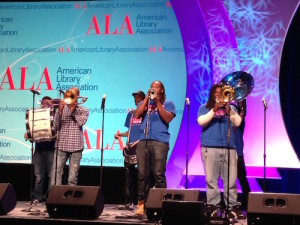