Troy “Trombone Shorty” Andrews knows how to entertain a crowd. And the hundreds of librarians at the February 2 Wrap Up/Rev Up celebration at the ALA Midwinter Meeting in Chicago couldn’t have agreed more. Many danced as Andrews and five members of the New Breed Brass Band opened the celebration with upbeat New Orleans jazz.

After a couple of sets, Andrews sat down with Rocco Staino, host of KidLit TV’s StoryMakers and contributing editor to School Library Journal, to talk about his upcoming picture book autobiography, Trombone Shorty (Abrams, 2015). (Award-winning illustrator Bryan Collier, who illustrated the book, was originally scheduled to take part in the conversation, but his flight was canceled because of the snow storm; Staino filled in.)

Andrews started playing when he was 4 years old, when his trombone was twice his height. Coming from a musical family in Tremé, New Orleans, he said, “Music guided everything and was the heartbeat of the community.” Growing up, he, his friends, and brother would use boxes for drums and tin lids for cymbals and march out of their homes and around the block, like many people did in the neighborhood. “If I hadn’t played music, I would have been an outcast,” Andrews said. 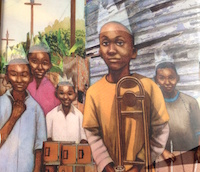 His favorite image in the book is on the back cover (right), he said, where Collier drew several boys with musical instruments, including one holding a box as a drum. The illustration triggers a “special memory” of growing up, Andrews said.

Around the 7th or 8th grade, he entered music school to receive formal training. (He has since started a foundation to help kids receive similar musical education.) Right after high school, at age 18, Andrews joined the horn section of Lenny Kravitz’s band, an experience that taught him discipline and helped shape his career, he said. His musical collaborations have also included Foo Fighters and Prince. He has also played at the White House twice.

With a tour schedule that has him performing 200–250 shows per year, Andrews said “there’s no start or end. It’s just one long show for us.” 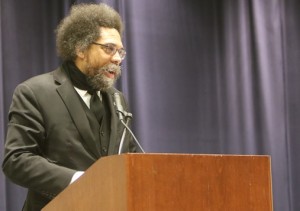 The Making of the Illinois Author Project