American Caucus Strategizes as IFLA Prepares to Open in Singapore 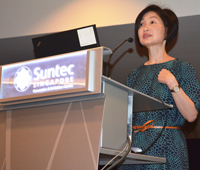 Some 200 US delegates to the August 17–23 IFLA annual conference in Singapore caucused August 16 at the Suntec convention center to identify top programs and developments in international librarianship. Speakers named a forthcoming trends study, a new online library, conference programs designed to engage new professionals in international librarianship, and the election of an American to the IFLA presidency as causes around which they would rally this year. Alluding to the tropical climate of Singapore and its hyper-air-conditioned shopping malls, organizing committee chair Elaine Ng welcomed the US delegates to the tropics and joked that the island city-state “has two seasons: indoors and outdoors.” 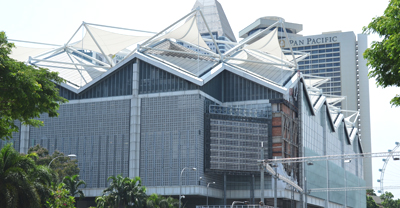 The annual World Library and Information Congress (WLIC) of the International Federation of Library Associations and Institutions, commonly known as IFLA, is arguably the most important and certainly the most diverse library conference in the world. The 79th annual meeting in Singapore is undoubtedly the first to be held in a shopping mall; the Suntec Singapore International Convention and Exhibition Centre is part of a giant complex that includes every imaginable chain store and upscale boutique. 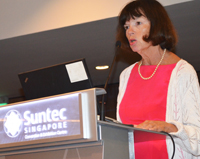 Big news for the American delegation was the election of Donna Scheeder, current IFLA treasurer, to the federation’s presidency for the 2015–2017 term. Announced in June, the election results make Scheeder the first American to serve in the top post since Robert Wedgeworth, IFLA president from 1991 to 1997. Scheeder noted that IFLA is in good financial health and pointed to a forthcoming “trends study” that will be the subject of a WCLIS session during the conference. 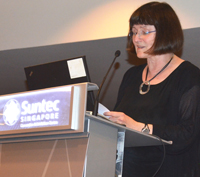 Ann Okerson, chair of the IFLA Professional Committee, drew two firsts to the attention of the American caucus: the IFLA Library online, made operational in time for this year’s WLIC, and the forming of a lesbian, gay, bisexual, and transgendered SIG (special interest group), holding an organizational meeting in Singapore. Okerson welcomed the American delegates to “Lion City,” the meaning of the word “Singapore” in English, and compared the library profession to the way the mythical Merlion, symbolic guardian of Singapore, protects and takes care of people.

Meanwhile, Russian delegate Irina Trushina showed up at the American caucus to present a special award of gratitude to Christie Koontz for her collaboration and skills- sharing with librarians in Russia. Koontz said later that many young Russian librarians are going through tough times trying to deal with the Russian government’s newly enacted laws criminalizing the dissemination of “gay propaganda” and are reaching out to American librarians for support.

Other speakers at the caucus included Russell Lynch, chair of Division II of the IFLA Professional Committee; current IFLA President Ingrid Parent of Canada; Janice Pilch, US representative to the IFLA Committee on Copyright and Other Legal Matters; and Nancy Gwinn, Loida Garcia-Febo, and Lynne Rudasill, who all spoke on the importance of involving new or young professionals in international librarianship. Rudasill, who is chair of Division I of the Professional Committee and its representative to the IFLA Committee on Freedom of Access to Information and Freedom of Expression, emphasized that the federation is looking for good project proposals. Garcia-Febo previewed conference programs that deal with how young professionals can get involved, and Gwinn urged involvement in the International Library Leaders Program.

Medical Library Association President Dixie Jones presided over the caucus, which concluded with a reception sponsored by the Chinese American Librarians Association at Harry’s Bar, a famous Singapore eatery and night spot. IFLA typically draws some 3,000–4,000 delegates from around the world to an annual meeting that moves from city to city each year. Last year’s conference in Helsinki, Finland, drew 4,100 library professionals from 114 countries. This year’s conference is expected to exceed those numbers. Representatives of the 2014 WLIC, to be held in Lyon, France, August 16–22, lured the American delegation to France with promises of cultural events and wine tastings. 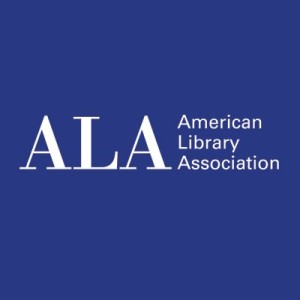 Libraries and the Affordable Care Act 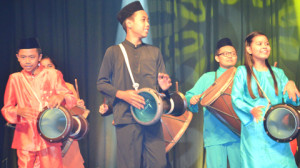