The 79th World Library and Information Congress (WLIC) of the International Federation of Library Associations and Institutions (IFLA), whose theme is “Future Libraries: Infinite Possibilities,” began with a bang August 18 in Singapore. Beating drums and a long, colorfully lit dragon welcomed some 3,500 delegates from around the world with the music and dance of the multicultural island nation, a place where “different races and religions live together in harmony,” as IFLA president Ingrid Parent characterized Singapore. Evident in the performance were aspects of Chinese, Indian, Indonesian, Malaysian, and other Southeast Asian ethnic customs and costumes.

Yaacob Ibrahim, Singapore minister for communications and information, began his address by remembering that as a child, “I always believed that librarians knew everything.” What he understands as an adult in an age of information overload is that “Google can bring you 100,000 answers; librarians can bring you the right one.” Ibrahim went on to explain that in Singapore “we love our libraries” and have invested heavily to make them free to all the nation’s citizens and residents. “Libraries have a role to play in shaping the nation’s future,” he said, as a “safe haven for everyone” and “as centers for knowledge creation, especially local content.”

Keynote speaker Chan Heng Chee, Singapore’s ambassador to the United States from 1996 to 2012, called the communications advancements that are sweeping the world a “technological tsunami.” Two billion people in the 21st century are now “connected,” she said, and by 2025 “one generation will have gone from nothing to access to all of the world’s information.” As a lifelong “library lover,” Chan said she will always value the library as a social space and librarians as “friendly, essential intermediaries” in supporting lifelong learning, especially entrepreneurship. A recent national poll, said Chan, revealed that the top two “sacred spaces” for Singaporeans are the Botanical Gardens and the National Library. 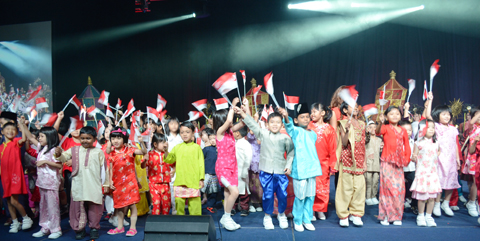 At the end of the opening session, 80 of the 17,000 kids ages 4–8 who participated in a national reading program took the stage, waving flags, wielding smiles, jumping to the music, and welcoming IFLA to their nation.

Among the afternoon sessions on IFLA’s opening day was an update on Haitian libraries’ recovery from the earthquake of 2010 that devastated the country. Danielle Mincio of Switzerland, who has been working tirelessly on a project cosponsored by IFLA with funding from the Prince Claus Foundation and the city of Geneva, described efforts to create a center devoted to the rescue and treatment of books, documents, and archival material and to train Haitian staff to continue the work into the future. Mincio said the target inauguration date is October of this year. 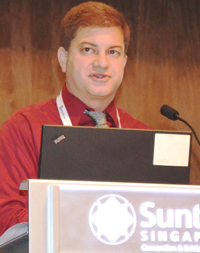 Another session featured a panel of librarians talking about libraries as a force for change in social movements. Steve Urgola of the American University in Cairo (AUC) said that with funding from the Mellon Foundation the “University on the Square” project had undertaken efforts to preserve the photos, videos, ephemera, and testimony of participants in the Egyptian uprising of 2011. He noted the urgency of capturing photos taken with mobile phones before they disappear and described how AUC implemented the project and gathered the testimony of eyewitnesses. Some 5,000 digital photos have been collected so far, along with a variety of artifacts—even tear gas containers and military boots. Urgola observed that this may be “the most photographed revolution in history,” because, he quipped, sometimes images document 10 people protesting and 15 people filming or taking photos of the protest. Asked what the renewed violence in Egypt would mean for the library’s efforts, Urgola speculated that much depends on what unfolds in the days ahead. Participants in the so-called Arab Spring may become disheartened and depressed and reluctant to participate if those 18 days in 2011 come to be seen as a “quaint failure,” he said.

Tamara Rhodes, an ALA Spectrum Scholar and recent library school graduate, delivered her IFLA–award winning student paper titled “A Living Breathing Revolution,” asserting that libraries can support social movements by being a forum for discussion and the creation of projects like StoryCorps oral histories or #OccupyDataNYC that “capture the act of living.”

Opening day of the WLIC ended with the opening of the exhibition hall, where nearly 100 vendors and library-related organizations from around the world demonstrated their products and services. Major conference sponsors include OCLC, Mb nano-Tensilogies Pte Ltd, and the Charles and Keith Group, which provided elegant tote bags for every conference registrant. 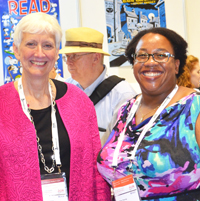 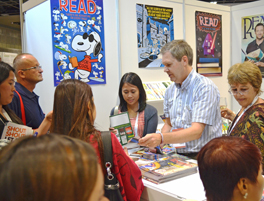 Scenes from the IFLA Exhibits Hall in Singapore: Far left, ALA President Barbara K. Stripling with ALA President-Elect Courtney L. Young; Michael Dowling (in striped shirt) and former ALA president Loriene Roy at the ALA booth. Photos by Carlon Walker

The IFLA conference in Singapore continues through August 23 with a total of 223 sessions. For more coverage, follow the conference on the IFLA Express blog.

American Caucus Strategizes as IFLA Prepares to Open in Singapore