On September 16, the American Library Association (ALA) announced findings that indicate book challenges in 2022 are expected to exceed the record-setting number of challenges in 2021. Here is the full release:

Eight months into 2022, the number of attempts to ban or restrict library resources in schools, universities, and public libraries, is on track to exceed record counts from 2021, according to preliminary data released today by ALA in advance of Banned Books Week (September 18–24).

Between January 1 and August 31, 2022, ALA documented 681 attempts to ban or restrict library resources, and 1,651 unique titles were targeted. In 2021, ALA reported 729 attempts to censor library resources, targeting 1,597 books, which represented the highest number of attempted book bans since ALA began compiling these lists more than 20 years ago.

“The unprecedented number of challenges we’re seeing already this year reflects coordinated, national efforts to silence marginalized or historically underrepresented voices and deprive all of us—young people, in particular—of the chance to explore a world beyond the confines of personal experience,” said ALA President Lessa Kananiʻopua Pelayo-Lozada.

“Librarians develop collections and resources that make knowledge and ideas widely available, so people and families are free to choose what to read. Though it’s natural that we want to protect young people from some of life’s more difficult realities, the truth is that banning books does nothing to protect them from dealing with tough issues. Instead, it denies young people resources that can help them deal with the challenges that confront them.

“Efforts to censor entire categories of books reflecting certain voices and views shows that the moral panic isn’t about kids: It’s about politics. Organizations with a political agenda are spreading lists of books they don’t like.

“Library professionals trust individuals to make their own decisions about what they read and believe. ALA and our partners in the Unite Against Book Bans campaign are asking readers everywhere to stand with us in the fight against censorship.”

Libraries nationwide will highlight increased censorship of books during this year’s Banned Books Week. Extensive programming during the week will bring together authors, librarians, and scholars to share perspectives on censorship and resources to support library workers. 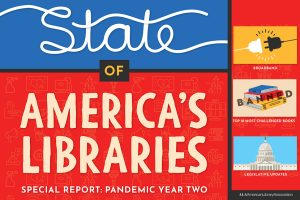