Bringing Congress on Board with #eBooksForAll

On February 3, the Rhode Island Library Association (RILA) hosted US Rep. David Cicilline (D-R.I.) at a round table discussion with library staff and patrons on ebook availability and pricing.

Like many libraries and consortia around the country, RILA has denounced Macmillan Publishers’ policy that places an eight-week embargo on new ebook titles after libraries purchase one copy. Cranston Public Library (CPL), for example, has stopped buying any ebook or digital audio book published by Macmillan or its imprints. CPL has also stopped promoting Macmillan authors and has removed the company’s physical books from library displays. RILA supports the American Library Association’s (ALA) #eBooksForAll campaign, which calls on Macmillan to reverse the embargo and restore full access to its complete ebook catalog.

RILA was inspired to reach out to Cicilline when the US House Subcommittee on Antitrust, Commercial, and Administrative Law asked ALA to contribute to its bipartisan investigation into the state of competition in the digital marketplace. In response, ALA’s report identified “practices by companies like Amazon and Macmillan Publishers that threaten Americans’ right to read what and how they choose and imperil other fundamental First Amendment freedoms.” Cicilline chairs that subcommittee, so RILA saw an opportunity to engage him on the issue and educate him on the role and services of libraries in his district. By making their member of Congress aware of how the practices of Macmillan and other players in digital markets are hurting his constituents and library users across the country, RILA members say they are taking a bolder step to protest what they see as a systemic injustice.

RILA gathered key library staffers and patrons from across the state and met with Cicilline for a conversation about the harm these practices have on Rhode Islanders. The group discussed how the lack of ebook availability because of the embargo hurt library patrons with accessibility and mobility difficulties as well as those who cannot afford to purchase all the ebooks they wish to read. When he learned the high prices libraries are forced to pay for ebooks, Cicilline said he understood the issue: that libraries want to be able to purchase ebooks at the same time as a consumer and at the same price.

“I’m particularly interested in potentially anticompetitive practices harming libraries and their users, especially in Rhode Island,” Cicilline said at the event. “I’m grateful that the Rhode Island Library Association put together today’s round table so we could discuss these issues in detail. I look forward to continuing our work together as the investigation wraps up and legislative fixes are introduced later this year.”

RILA is one of several library groups advocating for systemic changes to digital markets. At the request of libraries in her district, US Rep. Pramila Jayapal (D-Wash.) sent a letter to Macmillan CEO John Sargent asking him to respond to questions about the embargo. The New York Library Association and other ALA chapters are taking their concerns to state legislators as well.

In his closing remarks, Cicilline urged attendees to mobilize libraries across the nation to approach their members of Congress.

Library advocates can send their members of Congress a message, including ALA’s ebooks one-pager for decision makers. Contact ALA’s Public Policy and Advocacy Office for support.

JULIE HOLDEN is assistant director of Cranston (R.I.) Public Library (CPL) and president of the Rhode Island Library Association. ED GARCIA is director of CPL and a member of ALA’s Executive Board.

New ALA Report Cites Abusive Pricing, Denial and Delay of Sales to Libraries by Major Publishers

ALA denounces Amazon, Macmillan in response to congressional inquiry on competition in digital markets 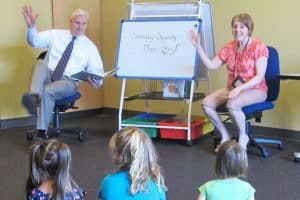