Appearing as an Auditorium Speaker on the ALCTS President’s Program on June 30, bestselling author Jennifer Kahnweiler said she has been an avid library patron ever since she was a child. In fact, her father led the renovation of the library in their hometown. “The library was like the other sibling in my life!” she said, laughing.

Author of The Introverted Leader: Building on Your Quiet Strength and Quiet Influence: The Introvert’s Guide to Making a Difference, Kahnweiler argued that many ideas and solutions are not being expressed simply because someone in our work or personal life who is introverted may not be speaking up to offer input. She called them the “quiet 50%.”

So how do you know if you’re an introvert? Kahnweiler said a good indicator is that an introvert is someone who “recharges from the inside,” like a battery. Extroverts get their energy from the people and places around them and may be anxious in very quiet situations, whereas an introvert needs that down time.

Some of the strengths of introverts include a quiet/calm demeanor, thinking before speaking, and the ability for reflection. Kahnweiler believes that introverts need to stop trying to mimic the characteristics of extroverts in order to become effective leaders or move ahead in the world. Instead, she suggests they play to their natural strengths and exert quiet influence.

Quiet influencers, Kahnweiler said, are people who toss a pebble and create ripples in our lives, but they don’t necessarily see them. In turn, we go out into the world and influence other people, she said. At this point, she asked the audience to think of a quiet influencer in their life and share it with the person next to them.

Kahnweiler included personal anecdotes as well as examples from people in leadership positions on how best to work with introverts. She discussed five things that often prove challenging for introverts:

Introverts need alone time, so being around people for long periods of time is challenging, especially when those people are extroverted. Working in teams is generally a good thing, Kahnweiler said, but as a society we do this too much, which doesn’t leave time for reflection—something introverts need.

“The best thinking is done in solitude,” she said.

Applying her ideas to libraries, Kahnweiler discussed some of the challenges librarians face today—maintaining relevance, shifting to linked data, generational shifts in the workplace—and then offered six strengths of quiet influence:

“When we [introverts] only listen, we create a perception gap,” she said. “That other person projects ideas on you because you’re not saying anything else, and you become overlooked as part of the conversation.”

She added that either only listening or talking is often a way to avoid conflict and suggested several listening tips:

Kahnweiler stressed the significance of quiet influence and what it can achieve in the world: “When you give a ripple power and direction, it becomes a river.”

Watch an exclusive American Libraries interview with Kahnweiler on the qualities of leadership and how introverts can build on their quiet strengths:

And how libraries are where “dreams endure”: 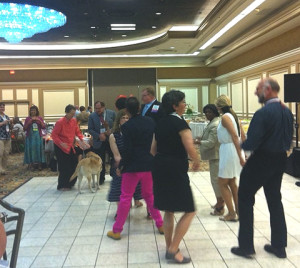