What do you cook when you get together with friends and family? This question kicked off an appropriately themed lunchtime session of the Symposium on the Future of Libraries titled “Every Bite of Food We Eat.” The symposium was held during the American Library Association’s Midwinter Meeting & Exhibits in Denver on February 10.

As the session’s attendees engaged in conversation and shared what they learned about their table-mates, the point of the exercise emerged: Talking about food and cooking food together allows people to learn about each other.

Liz Fitzgerald, the administrator of the Free Library of Philadelphia Culinary Literacy Center, expanded on the idea that culinary literacy has a broader impact than just learning about food throughout the session. The Culinary Literacy Center began in order to address community concerns surrounding food, including food insecurity and obesity, and to provide a creative space to teach traditional literacy skills by helping adults and children become better readers.

Fitzgerald described the excitement and terror of realizing that she and her coworkers would have to be the first to define “culinary literacy” in the public library. They decided that culinary literacy can be defined two ways: first, learning about food and cooking (for example, how to make a cake, knife skills, health and nutrition, and food ways); and second, learning through cooking (for example, math, reading, science, cultural literacy, and technology). As Fitzgerald said about the second prong of the definition, “What can’t you learn through cooking?”

This rather broad interpretation has allowed the Culinary Literacy Center to hold many creative programs with partners throughout Philadelphia (and even in Denmark!). These programs attract audiences from preschoolers to immigrant families to affluent young professionals, sometimes all in the same class. Fitzgerald compared the Culinary Literacy Center’s broad appeal to the kitchen at a party—it’s a place where everyone feels comfortable congregating. Since the cooking classes tend to attract community members who aren’t typical library users, the library can use these classes as a way to promote other library services, or at least make sure that everyone leaves with a library card application.

Fitzgerald described the sense of community that emerges with each class, notably in the Culinary Literacy Center’s Edible Alphabet class for English language learners, many of whom are immigrant or refugee women. Centering an English reading and conversation class around cooking gave the participants a way to connect with other and share their experiences. Fitzgerald said that the laughter during these classes often disrupted the librarians working in the offices next to the kitchen, but, of course, no one minded!

Along with the many stories and examples of the programs that the Culinary Literacy Center has done, Fitzgerald provided a wealth of information about the nitty-gritty details of starting culinary literacy programs, including dealing with food allergies and knife-wielding 10-year-olds. Funding was a concern for attendees who cannot afford to build a professional-grade kitchen in their own libraries, but Fitzgerald shared her experience with scaling down the programs for smaller libraries as well as some recommendations for finding community partners that may be able to help.

A toolkit for those interested in starting a culinary literacy program is available through the Philadelphia Free Library.

Miranda Doran-Myers is a research assistant at the Colorado State Library in Denver. 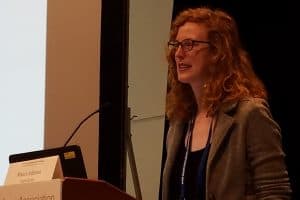