Williams was the “Muslim Journeys” project director, and explained that Evanston is a very interesting university community: Home to Northwestern University, it has ethnic and religious diversity, and there are authors and millionaires in the community in addition to many low-income residents.

“Controversy in Evanston can be over many things. Issues related to the school board can be very controversial,” Williams said. “No matter how small or homogenous a community is, any issue is going to be controversial. Even if 99% of people gave one view, the one percent’s viewpoint is just as valid and needs to be included. Controversy shouldn’t be something to be avoided, because it makes your community and your library stronger.”

Interestingly there wasn’t much controversy over the “Muslim Journeys” project. Rather, Williams has dealt with problems over library programming on the Israeli/Palestinian conflict.

She said some common faux pas related to this kind of programming are: one-sided publicity efforts, a panel that is not balanced, no clear vision for the program, a weak or overly polemical speaker, and ignorance of the topic or speaker.

Williams warned against thinking that the programming librarian will be able to hide a controversial speaker. “They will find you, and they will find out,” she said. “And you want them to know about it, if you’re having it. You don’t want people to say you were hiding it.”

If having a panel—she stressed not every program has to be a panel—Williams advised making sure it’s balanced; having speakers not just from both sides of an issue, but also from diverse backgrounds, ages, and disciplines. A one-sided program is fine, as long as it’s advertised correctly and the other side has been given an opportunity to present. Also, she said, be clear whether the program is just meant to be educational or if it’s a forum for a certain position.

When selecting speakers, Williams said to choose people who are going to be able to speak rationally about a topic instead of those who are just going to rant. This involves doing research on the issue and proposed speakers before setting up the program.

It’s also important to introduce your speakers during the program and highlight their backgrounds and accomplishments. Williams also suggests having them share personal or funny anecdotes to humanize them for the audience.

Williams also stressed the importance of knowing your institutional policies (people running for office in Evanston can’t speak at the library publicly within six weeks of an election, for example), who in your community needs to be informed and invited, and the law.

Connecting with the community

Williams also encouraged attendees to get their administration on board with controversial programming by relating it to the library’s mission, and explaining that all publicity is good publicity for the library.

She added that this kind of programming is a way for the library to embed itself in the community and make important connections with local government, police, and the media. “There's no such thing as controversy-free programs. If you refuse to talk about issues, that will become the controversy,” she said.

When dealing with the media, Williams suggests having an elevator speech of a few talking points ready, anticipating the “gotcha” questions they may ask, and always responding by staying on topic and on message rather than engaging them.

During these programs, it’s very important to acknowledge that topics arouse strong emotions, Williams explained. “Thank people for having the courage to discuss these issues, acknowledge the controversy,” she said. She cited an example of someone wanting to show the documentary Waiting for Superman, which is very critical of teachers’ unions. Williams agreed to put on the program, but told the organizers she would invite the local teachers’ union to balance it.

When one participant asked teachers why they would be against merit pay, a teacher responded that encouraging competition among colleagues would prevent them from working well together as a team. “For the majority of people attending these programs, they walk away with at least a new perspective that they didn’t have before. And it’s also one of the few times people on opposing sides of an issue actually get to hear from one another,” Williams said, adding that it’s important not to expect miracles, but to demand respect throughout the programming process.

For facilitators, she suggested setting ground rules and sticking to them. Some of the agreements that should be made clear when starting the dialogue are that you should speak only for yourself, not for your group; allow others to finish speaking; ask questions to learn information, not to try and convince others; address people by the names and terms they prefer; avoid assigning beliefs and motives to others; and empathize that whatever is said in the room stays in that room.

“It’s very important that people feel it is a safe space where they can speak openly,” Williams said.

When taking questions from the audience, either use note cards and select questions at the end (consciously selecting a variety to be balanced) or control the microphone—never give it to anyone to hold.

She recommended key phrases to use during a program if someone’s commentary is dragging on:

When it comes to safety, don’t shy away from hiring security, Williams said. She also suggests greeting everyone at the door, making eye contact, and using ice-breaker questions like “What brings you here today?” to learn a bit about them.

“It’s a lot harder to be a jerk to someone if you’ve had the friendly interaction to start with,” Williams said. “And it’s a good way to feel out if someone may be difficult to deal with.”

Should a problem arise or someone get loud during a program, always speak calmly and keep your voice low.

Despite all the potential pitfalls, Williams reiterated that controversial programming is important. “We as librarians have to give people a space to have a voice in these issues affecting communities,” she said. “If you want a controversy-free life, you are in the wrong profession, and, quite frankly, the wrong world.”

Garnar reviewed potential (and real) scenarios that had occurred during the “Muslim Journeys” project, and encouraged discussion on ways that they might respond. Scenarios included people coming into the library to donate 25 Christian books to “balance out” the titles that come with hosting the “Muslim Journeys” program or requesting Christian books be acquired as part of the library’s collection.

The audience came up with various responses from pointing to an acquisition policy to simply saying thank you.

“Many times, people just want to be heard, so even just acknowledging their perspective may be sufficient,” Garnar said. “But use and educate yourself on your library’s acquisition and gift policies.”

He also suggested including community members on a programming advisory board or creating a focus group so that they are aware of any upcoming programs that might stir controversy. 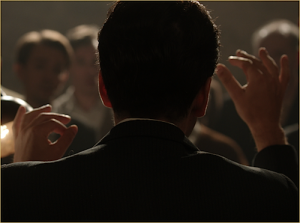 ALA First-Timer: Going to the Movies 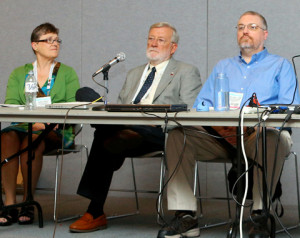