Libraries and the 2020 Census

Census data has been an indispensable tool in allocating resources, justifying new services, and advocating for funding. Libraries have long played a role in the creation and consumption of that data, and in 2020, our role will be more important than ever. The 2020 Census will be the first in its 230-year history that can be taken online, and libraries will need to be prepared and engaged to ensure an inclusive and complete count of our nation’s residents. In anticipation of this historical shift—and with 25% of housing units in the US without internet access—the American Library Association (ALA) is investigating what this will mean for public libraries across the country.

On October 25 at the Chicago Public Library, ALA—alongside partners Forefront, Voices for Illinois Children, and the US Census Bureau—explored how to create the most inclusive count possible. This meeting was part of a Census Solutions Workshop, one of many being hosted around the country. The room was packed with nearly 80 participants, including roughly a dozen from Illinois libraries; Illinois Library Association Executive Director Diane Foote; representatives from the US Census Bureau; two Cook County Commissioners; Robert Rivkin, the City of Chicago’s deputy mayor; and Illinois State Rep. Theresa Mah.

During the workshop, attendees worked on challenge questions, such as:

According to a study by the Center for Urban Research at the City University of New York, a public library is located within five miles of 99% of hard-to-count census tracts identified with the lowest response rates in 2010—and 73% of the time a library is located within one mile. As Forefront’s President and CEO Eric Weinheimer remarked, “If not us, who? If not now, when? The need for a complete census calls us to action.”

ALA is engaging with community stakeholders to ensure that libraries are invited to and represented in the policy discussions and planning process. For example, Nashville (Tenn.) Public Library Director Kent Oliver spoke at the National Association of Counties conference in July. Earlier in October, ALA released a brief for policymakers, funders, and community partners.

Libraries are directly affected by the Census through population-based federal funding such as the Institute of Museum and Library Services grants to states under the Library Services and Technology Act. And this effect is magnified many times for other vital programs that serve our most vulnerable communities—federal funding for Medicaid, public housing, and the National School Lunch Program, to name a few. Working to ensure a complete count is fundamentally an issue of equity, diversity, and inclusion.

At the Midwinter Meeting & Exhibits in Seattle, ALA’s Washington Office will present “Library Advocacy and Community Engagement in the 2020 Census,” Sunday, January 27, 4–5 p.m., to discuss how library staffers and supporters can increase awareness of library services and strengthen community relationships by participating in a Complete Count Committee. You can also follow along via the hashtag #CountOnLibraries. 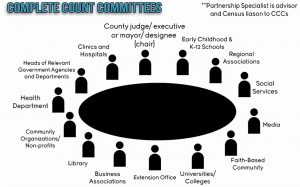